7. The Pit and the Pendulum

The working relationship between Stuart Gordon and Charles Band did not end with the dissolution of Empire Pictures. Band would take advantage of the growing home video market in the early nineties with his new company, Full Moon Entertainment. Full Moon's goal was to release genre films primarily direct-to-video but maintain glossy production values. They kept it up for a few years too, wining a loyal following with their movies full of killer puppets and gravelly-voiced vampires. Considering the previous successes they had, it's not surprising that Gordon would once again collaborate with Band at his new home. The resulting film would have Gordon adapting another literary master of horror, though in a round about way.

Edgar Allan Poe's “The Pit and the Pendulum” may be one of the author's most famous works but it's also pretty short, forcing adaptations to get clever. Like Roger Corman before him, Gordon incorporates Poe's iconic scenario into a totally unrelated story. The year is 1492 and the place is Spain. Grand Inquisitor Torquemada leads a charge to torture and kill any heretics or enemies of the Catholic Church. During a public execution, a baker and his wife catch the inquisitor's eye. The wife, Maria, inflames Torquemada's lust, causing him to immediately accuse her of witchcraft. After her capture, her husband Antonio attempts to rescue Maria from Torquemada's torture chambers.

Stuart Gordon's films have always had a subversive, intelligent edge to them. However, to an unaware viewer, the likes of “Re-Animator” or “From Beyond” probably appear to be undistinguished gore-fests. Full Moon's big franchise, meanwhile, starred murderous puppets. With “The Pit and the Pendulum,” Gordon seemed to want to bring some class to Charlie Band's house. Instead of being adapted from H.P. Lovecraft, a cultishly beloved author who still wasn't accepted by the mainstream at the time, it draws from the works of Edgar Allan Poe, America's most famous writer of the macabre. The film is a gothic period piece, adding some history to its grisly tale. Yeah, despite these aspirations for class, “The Pit and the Pendulum” is still an exploitation movie, featuring gratuitous nudity and graphic gore. It leads to an interesting push-and-pull in the film. 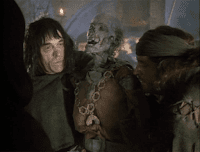 Humor has always been a frequently utilized tool in Stuart Gordon's toolbox. Even with material as grim as the Inquisition, Gordon incorporates some dark humor. “The Pit and the Pendulum” is, at times, a satire of religious fanaticism. The opening scenes depicts Torquemada and his men taking the corpse of a long dead noble from his tomb. The skeletal corpse is then whipped, punished for the supposed heretical behavior the noble committed in life. It's an absurd moment but one typical of the kind of shenanigans the church got into around this time, such as when a dead body was put on trial. By shining a modern light on these bizarre habits, Gordon expose the insanity behind any and all fanaticism.

Yet Gordon isn't totally joking around. At other times, “The Pit and the Pendulum” is a deathly serious examination of Catholic zealotry. The characters live in constant fear of persecution from the church. The smallest, most innocuous acts can be punished with years of torture and imprisonment. A notable scenes has Maria being stripped before Torquemada. In order to prove she's a witch, her body is searched for unusual marks. When none is found, one of the inquisitors just pinches her hard enough to leave a mark. Throughout the story, the Church's persecution of Jews and Muslims is treated as a grim fact of life. This is a world where religion doesn't bring comfort or inspiration. Instead, it's used as a tool for political control and an opportunity for sadists to indulge their tendencies.

At the center of this horrifying dynamic is Torquemada. The part was written for Peter O'Toole which would've been cool. Yet Lance Henriksen's take on the mad friar is hard to forget. His head wreathed with a ring of hair, Henriksen glares continuously with insane, unblinking eyes.  Henriksen plays the inquisitor as a man constantly in the grips of religious mania. This is best displayed during a striking scene where, overwhelmed by his lust for Maria, Torquemada insists a servant flagellates him. He wears a cilice lined with metal prongs, leaving his flesh cut and bloody. He shatters a glass vase, walking over the broken shards. Finally, he is whipped repeatedly. All the while, Henriksen's conviction is unshakable. Henriksen's gravelly voice is well utilized when delivering violent mad sermons, damning all he deems unworthy. His intense physicality is similarly deployed. He makes for a frightening central villain and a fascinating character.

As captivating as he is, Henriksen's Torquemada isn't technically the film's main character. Instead, the young lovers sit at the story's center. Jonathan Fuller, in his only his second film credit, plays Antonio. He begins as a young baker but becomes an adventurer, motivated by his love for his wife. Fuller is solid in the role, juggling the story changes well enough while keeping the audience's interest. Roca De Ricci plays Maria. De Ricci has even fewer credits than Fuller, with this movie being her final screen appearance. Yet she's also quite good. She successfully projects Maria's sense of innocence, creating a character the audience both hopes to protect and can root for. (She's also gorgeous, which doesn't hurt considering Maria's frequent nude scenes.) More importantly, the two have decent chemistry together, believable as a pair of young people in love.

Gordon continues to fill his films with familiar faces. “Dolls'” Stephen Lee appears in a supporting part as Gomez, a portly and slightly goofy worker in Torquemada's dungeons. While Lee's comical antics are slightly out of place in 15th century Spain, he still enlivens every scene he's in. Jeffrey Combs also appears in the film. He plays Francisco, a studious church cleric. Combs' part is small but he brings some dry humor to his scenes. There are some notable new faces too. Tom Towles shows up as Don Carlos, an especially sadistic inquisitor. Towles' gruff exterior is well-suited to the part of an asshole torture-master. My favorite supporting character is Frances Bay's Esmeralda. A self-professed witch, she has been imprisoned in Torquemada's dungeons for years. Bay projects a warm sense of knowledge but also a sardonic side, making her one of the film's most likable personalities.

For most of its run time, “The Pit and the Pendulum” is a horror movie more because its source material than its actual content. In fact, Gordon's “Pit” feels a lot like a swashbuckler at times. There's a lengthy scene where Antonio escapes torture. He grabs a sword and leaps around the room, fighting off a number of guards. He even kicks a guy into an iron maiden. This sudden segue into swashbuckler action is not entirely effective. It's goofier than the movie around it. While Gordon's direction is as strong as ever, he doesn't show the surest hand with such theatrical action. It seems the sequence was including more because the director thought it was cool and less because it fit the movie's tone. 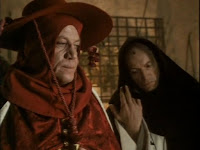 As I said, Poe's original story is short and simple. Gordon's “Pit and the Pendulum” does eventually tie a man below a pendulum and above a pit. However, in order to reach that ninety minute run time, the film has to add a lot of stuff. Among these additions is scene curbed from a different Poe story. Midway through the film, a cardinal from the Vatican visits Torquemada's castle, inspecting his methods. In a quote from “The Cask of Amontillado,” the cardinal ends up entombed alive behind a wall. What makes this scene even better is Oliver Reed plays the cardinal. Sporting a hilarious Italian accent, Reed chews up the scenery, making an ideal foil for Henriksen's super-serious Torquemada. The scene contributes little to the story but I'm so glad its here. It makes “Pit and the Pendulum” an even more delightful viewing experience.

As “The Pit and the Pendulum” goes on, it indulges in a goofy but grisly horrific streak. The most inspired of these scenes has Esmeralda swallowing handfuls of gun powder before being burned at the stake. So, when lit ablaze, she explodes spectacularly. Gordon also can't resist showing what the swinging pendulum can actually do to a human body. Yes, we see the gory aftermath of a man cut in two. In the last act, as Torquemada spirals totally into madness, Gordon piles on the creative grotesqueness. A corpse reassembles itself and ghosts appear as shadowy figures. Finally, a man plummets into the pit to his doom. It's not the most sophisticated stuff but its a lot of fun.

From a technical side, “The Pit and the Pendulum” is obviously low budget. The majority of the film was shot inside a large Italian castle owned by Charles Band. The sets are limited but Gordon still makes sure the film still looks good. He employs quite a bit of shadowy atmosphere, getting the most out of the aged set. The script is not quite so technically sound. How fantastic the story is varies from scene to scene. In one moment, a witch is just a woman who understands herbs and plants. Other times, she literally has magical powers. Maria ends up being saved at the last minute seemingly by an act of God. The writer is slightly sloppy but the filmmaker seemed certain that the breezy tone would keep the audience from noticing. This is mostly correct.

”The Pit and the Pendulum” is probably one of Stuart Gordon's more minor films. While Gordon attempts to bring some intelligence and subtext to the material, the film still ends up feeling like a Full Moon movie. That is, a slightly low budget horror film with plenty of sex and gore but, ultimately, a light-weight tone. This is not necessarily a bad thing and “Pit and the Pendulum” is lots of fun to watch. However, some inventive sequences and a crazed Lance Henriksen performance becomes the main reason to see this one. [Grade: B]
Posted by Bonehead XL at 11:39 PM