After many successful years working in theater, Stuart Gordon wanted to break into film. And a pretty good way to break into Hollywood in the eighties was to make a low-budget horror movie. “Re-Animator,” the film that would make Gordon's career, began with the suggestion that the world needed more Frankenstein movie. This led him to “Herbert West – Re-Animator,” a lurid “Frankenstein”-inspired serial H.P. Lovecraft wrote because he needed the money. Originally conceived, believe it or not, as a television series, it was quickly deduced that “Re-Animator” would be better served as a feature film. Despite being released without a rating, limiting its options, the film did well in theaters. It did even better on video, where its cult following blossomed. Surprisingly, “Re-Animator” was even well received by critics, who often turned their eyes up at horror, especially in the over-saturated eighties. Today, “Re-Animator” is widely regarded as one of the best films in the genre.

Herbert West, an ingenious young medical student, is very close to the greatest scientific breakthrough in history: Reanimating dead tissue and bringing life back to the dead. But he needs to work out a few kinks first. Yes, his glowing green reagent gets corpses up and moving again. It also turns them into mindless killers. When West comes to Miskatonic University in Massachusetts, he makes friends and enemies. Dr. Dan Cain somewhat unwillingly becomes West's primary assistant. Dr. Hill, meanwhile, immediately dislikes West and seeks to steal his research. Not even being killed stops Hill, who also desires Dan's girlfriend. Soon, West and Cain have quite a mess on their hands.

Before “Re-Animator,” H.P. Lovecraft adaptations were few and far between. Even the series of adaptations Roger Corman produced in the sixties never quite reached the level of fame as his Poe adaptations. After “Re-Animator's” success, Rhode Island's scribe of the weird became a regular fixture in film. However, not all Lovecraft fans immediately embraced “Re-Animator.” The film is full of bloody gore, in contrast to the cosmic horror Lovecraft specialized in. The film is also heavy on sex and nudity, which probably would've horrified the practically asexual Howard Philips. Yet the original “Herbert West – Re-Animator” serial was not highly regarded by Lovecraft. He wrote it as a parody of “Frankenstein” and disliked the serial format. Truthfully, by making “Re-Animator” into a bold-and-bloody horror/comedy, Gordon rescued one of Lovecraft's least praised works from obscurity. So maybe Lovecraft wouldn't have appreciated the content but the film is certainly in the spirit of the original work.

“Re-Animator's” connection to “Frankenstein” is very apparent. Both stories revolve around the most human of goals: The quest to conquer death. While Mary Shelley's classic tale is often reduced to a moral of “Man should not meddle in God's domain,” the probably atheist Lovecraft brought a different approach to the idea of overcoming death. Herbert West's attempts to revive the dead only results in more death. And it's not pretty either. In H.P.'s story and Gordon's film, the revived corpses are grisly sights. The face of death – brutish, ugly, sudden – is constantly shown to the characters. Yet Dan Cain still hopes to save lives, even if the medical setting is often casual about the facts of death. The film begins and ends with him attempting to resuscitate a dying person. But the story's thesis is clear: Attempting to conquer death is futile... Not because its against God but because the facts of life and death are too brutal to overcome.

In addition to reigniting interest in Lovecraft and launching Stuart Gordon's career, “Re-Animator” made Jeffrey Combs into an instant cult icon. On paper, Herbert West is probably not the most relatable character. He's arrogant, pompous, obsessive, and totally amoral. Combs, however, turns West into an oddly likable guy. He has a quick wit, Combs often making small lines hilarious. By making Dr. Hill a stuffy bureaucrat (and even more morally repugnant), West becomes an anti-hero, raging against a corrupt system. There's also something respectable about West's unwavering commitment to his goal. He might have a, shall we say, relaxed attitude about laws but, damn it, West has got a cause. More than anything else, Combs' funny, energetic charisma makes West into an instant fan favorite.

Oh yeah, there's another guy too. If “Re-Animator” has one serious flaw, it's that West is not technically the film's protagonist. Combs gets an “and” credit in the opening titles and on the poster. Bruce Abbott's Dan Cain, meanwhile, gets top billing. It's not that Cain is a bad guy. His horror at the moral depravity of West's actions is evident. Abbott is a solid actor, even getting a few laughs out of the audience. The problem is Cain just isn't as entertaining as West. Abbott is stuck in the part of the boring hero guy, who stands back and gets freaked out by all the cool and interesting stuff  Herbert does. He's dragged along by the plot, doing more reacting than acting until the final act. There's nothing exactly wrong with Abbott or Cain but they end up being slight wet blankets on the proceeding.

Cain isn't the only square in the story. His girlfriend, Meg, is at the center of an especially improbably love story. Poor Meg is wildly abused by the plot. Her cat is killed before seeing it resurrected as a snarling, undead ghoul. Next, her father is also killed, though she believes him to simply be transformed into a snarling, lobotomized madman. After that, she's stripped and pawed at by a headless zombie. Finally, she's murdered. Despite all the above, Meg never immediately dumps Dan and flees. She sticks around long after a reasonable person would've left. Despite this issue, Barbara Crampton's performance comes awfully close to giving Meg some agency. The character is written as, and referred to by West, as a flighty coed. Crampton provides her with a meatier personality, a upright and normal girl exposed to a sideshow of horrors. She's still a screaming victim but at least she has more personality than most.

Stuart Gordon's theater work was noted for its relaxed attitude towards sex and nudity. “Re-Animator” continues this approach. The film is blatantly sexual. Dan and Meg share a passionate love scene. Crampton, a good sport, is often nude. The reanimated corpses, meanwhile, are also naked, the film containing quite a bit of male frontal nudity. By the time we reach the infamous “head giving head” scenes, “Re-Animator's” winkingly naughty approach is clear. A woman molested by a decapitated zombie is a horrifying scenario but the film's approach to sex is more farcical. It's all so ridiculous, as absurd as a scientist trying to conquer death, that you can't help but laugh. Dr. Hill's lust for Megan extending beyond the grave is seemingly a comment on the foibles of human sexuality. It's not just this situation that's ridiculous, all of it – the way desire tie people into knots, the lengths they go to find love – is ridiculous.

“Re-Animator” was part of a wave of excessively gory zombie-related horror movies in the eighties. The film was quickly adopted by the same crowd that embraced “Return of the Living Dead” and the “Evil Dead” series. The film's violence is extremely grisly. The make-up on the re-animated corpses is intense. On one, we can see the blood settled in the back. Another has half its body burnt to a crisp. The writhing death throes of a half-dead cat are similarly unnerving. Yet the movie's approach to gore frequently veers over the top. Intestines exploding from an abdomen, becoming make-shift tentacles, is ridiculous in a comic-book-y manner. A decapitated head constantly needing fresh blood to function is similarly silly. So “Re-Animator's” gore is both shocking and kind of funny. 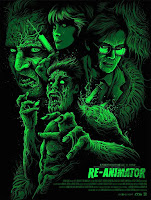 That comedic streak runs throughout the whole film. Maybe that's why “Re-Animator” was a critical success in 1985. It tempered its nasty gore with a goofy sense of humor. This is mostly thanks to Combs' delivery. Lines about dead cats or talking heads getting jobs in sideshows become absolutely hilarious in his hands. As is the characters direct solution to Dr. Hill's head refusing to stand up. There are other blatantly comedic moments. Dr. Hill ordering his headless body around results in some delightful physical comedy. Such as the zombie attempting to sneak into the hospital, wearing a dummy head, or fumbling around while looking for a fresh bag of blood. The film's puckish approach to its horrors keeps the gory material fresh and entertaining.

As I said, Herbert West isn't the villain of the film, even if he's directly responsible for the horde of undead killers. Instead, David Gale's Dr. Hill is the true villain. At first, he plays Hill as simply a pompous man of science, unwilling to learn or open his mind up to new things. As the film goes on, Hill develops a genuine megalomaniacal side. He wants to brainwash people, kidnap the pretty girl, and presumably take over the world. David Gale hams it up fantastically in the part, relishing the character's shift towards comic book super-villainy. I also like Robert Sampson as Dean Halsey. Considering how outright disturbing her boyfriend's behavior is, the dean's reaction is actually pretty fair. Sampson makes it clear that his actions come from a place of love for his daughter, even after he's turned into a drooling revenant.

Gordon's previous experiment with film had been a literal recorded stage show. In “Re-Animator,” he happily breaks away from the stage. The film is often characterized by a sense of movement. An early scene follows a gurney as it is wheeled through a hospital. A similar shot is repeated near the film's conclusion. Gordon's camera often peers around at his characters, mimicking the movements of his characters. This is evident even from the opening credits, where Richard Band's “Psycho” aping score is paired with images of shifting, moving anatomical sketches. Gordon also shows a decent use of light, especially once we get lights shining through smoke in the movie's final minutes.

“Re-Animator” is just as wildly entertaining today as it was in 1985. The film's cult following is well deserved. It's combination of gory special effects, grisly zombies, naughty sex, and sarcastic humor was destined to appeal to many horror fans. Considering how magnetic he is in the film, it's no surprise that people still line up at horror conventions to get Jeffrey Combs' autograph. With the film, Stuart Gordon would bring Lovecraft to a new audience while also cementing his own reputation as one of the fabled masters of horror. [Grade: A]