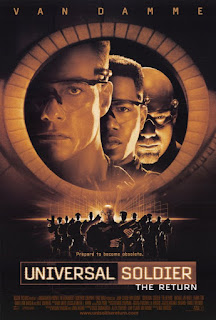 By 1999, Jean-Claude Van Damme’s career had hit a low point. “Double Team” and “Knock Off” were box office flops. 1998’s “Legionnaire” was the first of his films to go direct-to-video but far from the last. Van Damme says he was clean by this point but the Cocaine Years had taken their toll. His star power was bottoming out. As one last desperate attempt to recapture the public’s attention, the action icon employed the strategy of starring in a sequel to a previously successful film. I don’t know if “Universal Soldier” was that hot of a property by 1999. I guess those TV movies kept the title in audience’s minds? It was also one of JCVD’s biggest mainstream hits. Either way, “Universal Soldier: The Return” did not reignite Van Damme fever. The film’s failure would begin the Muscle from Brussels’ long exile to the straight-to-video netherworld.

In the years since the first “Universal Soldier,” Luc Deveraux has been striped of his cybernetic add-ons and psychological programming. He’s mostly human now. He even married his love interest from the first film, fathered a daughter, and became a widower. Now, Deveraux works as a consultant with the government, who is pumping out Universal Soldiers with the help of a super-computer named S.E.T.H. However, budget cuts soon force the closure of the UniSol program. S.E.T.H. does not take kindly to this. He takes control of the remaining UniSols, holds the government facility hostage, and violently kills anyone who opposes him. Deveraux goes on the run with another reporter until S.E.T.H., inhabiting a super-powered UniSol body, kidnaps Luc’s daughter. Now the fight is personal.

“Universal Soldier: The Return” is the first Van Damme movie I’ve seen that I would described as dumb without any endearment. As a sequel, it doesn’t build upon the original intelligently. I kind of doubt that Deveraux would willingly work for the government, considering what they did to him. Or that he would re-adapt to human life so easily. Or that the program would even exist any more, after the huge fuck-ups last time. A super-computer rebelling against its own termination is an old cliché, which “The Return” brings nothing new to. Moreover, it seems to me that the invention of complex artificial intelligence would render the UniSols obsolete. If you have that technology, why not just build robots? Beyond that, the story takes several dumb turns. Such as the random appearance of a strip club/phone sex hub, the even sillier bar fight that follows, Deveraux and the lady reporter falling in love in the space of a few hours, and the obnoxious punk rock hacker who waltz into the story without much reason.

The script is lousy but Jean-Claude Van Damme is doing his best to elevate the material. Unlike his last few films, where the star didn’t seem that invested in the material, Van Damme appears very jovial throughout “The Return.” His energy runs high, he smiles a lot, cracks joke, and trades romantic banter with his female co-stars. This is at least the fourth time he’s played a father. That too seems to contribute to his high spirits. The scenes he shares with Karis Bryant, the actress playing his daughter, are genuinely charming and sweet. By this point, Van Damme had kicked coke and was on the way to remarrying his third wife, who he’s still married to. That makes a lot of difference, I suspect. The script is still crappy but the star visibly having fun definitely counts for something.

Dolph Lundgren’s career wasn’t doing too hot by 1999 either. However, I guess his character going into a wood chipper discouraged the producers from bringing him back. Instead, two new villains vex Luc Deveraux this time. Pro-wrestler Bill Goldberg plays Romeo, an antagonistic UniSol. The soldiers deliberately lacked personality last time. Romeo, however, displays anger and a sense of humor even before the rebellion. Every time Goldberg shows up, Van Damme defeats him, causing the wrestler to crack an exceedingly lame one-liner. It’s mildly amusing at first but quickly grows tiresome with repetition. Instead of adapting his wrestling persona to the character, Goldberg basically just plays his wrestling persona. Michael Jai White’s distinctive baritone is immediately recognizable coming out of S.E.T.H.’s computer brain. When S.E.T.H. uploads his consciousness into a human body, White obviously puts in an appearance. Playing a cold and logical killer restrains White’s immeasurable charm and comedic timing. However, White still has an impressive screen presence and solid acting chops, making him a more-than-worthy successor to Dolph.

Many of the action sequences in “Universal Soldier: The Return” are underscored by obnoxiously loud proto-nu-metal. This is, of course, ridiculous and drains a lot of positive energy out of the sequences. Few of the action scenes are that memorable. The film opens with a mildly exciting speed boat chase, even if that scene turns out to be a dumb training exercise. There are several shoot-outs in the military facility, many of them devolving into bad guys firing and the good guys ducking behind walls. Van Damme’s expected gymnastics are unusually restrained. I swear he doesn’t kick someone until nearly an hour in. However, once the kicking happens, the film picks up considerably speed. A fight scene in the hospital is pretty cool, concluding with a bad UniSol launched into an industrial washing machine. The final fight between Van Damme and White has both stars giving it their all. Jean-Claude leaping off chairs and walls is awkward but the original Universal Soldier and Black Dynamite happily beat the crap out of each other. White’s raw physicality and powerful kicks actually make Van Damme seem out-classed, however briefly.

William Malone, primarily known as a horror director of debatable talent, co-wrote “Universal Soldier: The Return.” Not surprisingly, the sequel suffers from many of the same obnoxious story gaps and stylistic quirks as Malone’s directorial work. “The Return” isn’t quite bad enough to be entirely terrible. It’s also not unintentionally funny enough to transcend quality and become campy fun. Instead, it’s an underwhelming sequel, seemingly made to cash-in on the original’s dwindling recognition and boost its star’s falling status. On the other hand, it’s also only 79 minutes long, so you won’t waste much time watching it. [5/10]

[THE VAN DAMMAGE: 4 outta 5]
[] An Entire Fight, Sans Shirt
[X] Close-Up Screaming
[X] Dancing*
[X] Jump-Kicks A Guy, Through Something
[X] Performs Either a Split or a Spinning Roundhouse Kick

*The briefest of head bops.

Zack, Many thanks for your comments about Universal Soldier Part "Deu". I share your opinion of the script. Its virtually incomprehensible. I can safely say, that with the exception of perhaps one line of dialogue, there isn't a single bit of my original screenplay left. Too often people assume that because your name is on something, that it is representative of your work. The original script was about the first thinking computer. The was no part in the story for Van Damme or anyone like him. You will notice a whole lot of other names on the "screenplay" credits. If you're ever interested I'll be happy to send you a copy of the original script which was title "Vox". It has no bearing on what was made.

Signed; The Writer (and Director) of Debatable Talent

Mr. Malone, I'm gratified that you took the time to read something I wrote. I'll try and be more open-minded about your work in the future.