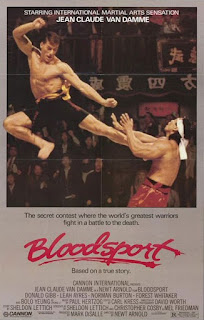 In the late eighties what was then called kickboxing, and would today be called mixed martial arts, began to creep into the mainstream. We’d hear stories about bouts in secluded rooms, where deadly fighters would beat the ever-loving crap out of each others. Now, this kind of martial arts can easily be found. Back then, it was mysterious and dangerous. Feeding off this intrigue and capitalizing on the public conception were movies like “Bloodsport.” The low budget action flick starred Jean Claude Van Damme, a kickboxer with a funny accent and unproven star power. A lot like those fighting rings, “Bloodsport” would become an underground success while simultaneously making Van Damme the next biggest action star.

As a young boy, Frank Dux was a French immigrant in China. Intrigued by martial arts, he found himself envying some Japanese neighbor’s katana. Soon, the Japanese father, secretly a martial arts master, took Dux under his wing. A decade later, Dux is an expert in the art of fighting. Deserting his military post, he runs off to Hong Kong to compete in the Kumite, an especially brutal underground fighting competition. Dux makes friends, like Ray, and enemies, like the viscous fighter Chong Li.

In 1988, Van Damme had experience kicking people in the face as a professional face-kicker. As an actor, he was as green as could be. His most notable previous credits was an auto-biographical turn as Gay Karate Man in “Monaco Forever.” Despite his inexperience, Van Damme’s appeal was obvious. His line-reading is sometimes stiff and his on-camera skills are still unpolished. Yet his physical presence is immediately impressive. The guy is weird enough, due to his accent and his general European quality, to be compelling. And he’s very good at breaking bones and kicking ass. His physicality is obvious every time he does a split or screams while sweaty. In this early performance, you can see the roots of the fascinating action star to come. You can even catch a glimpse at the eccentric humor that would soon become one of his trademarks.

Mostly though, you watch “Bloodsport” to see people beat the shit out of each other. It’s right there in the title. The movie is about a sport and that sport is bloody. Bones are broken, jagged fragments protruding through the skin. Limbs are twisted, necks are wrenched, and backs are cracked. Lots and lots of faces are bashed in. At one point, we see how much blood has been smeared on the mat. “Bloodsport” would later inspire “Mortal Kombat.” The film has that video game quality too. Many of the other fighters have gimmicks. There’s an African fighter who leaps around like a monkey. A barrel-chested fighter in a loin cloth likes to give back-breaking bear hugs. One fighter with facial hair prances before a match and tends to cheat. The movie acknowledges its resemblance to video games by having the main character stop in an arcade early on and play "Karate Champ."

As I’ve mentioned in the past, eighties action movies were rift with gay subtext. And few action stars were gayer then Jean-Claude Van Damme. The man Dux bonds with while in the video arcade is Ray, a burly fellow. Another fighter competing in the Kumite, Frank and Ray immediately become best friends. They cheer enthusiastically for each other, egging one another on. When Chong Li beats Ray into unconsciousness, it enrages Frank. Suddenly, it’s personal. Dux broods about this before taking the fight to Chong Li. After winning the day, the two men clasp hands and say they love each other. So there’s not much sub about the gay subtext. And this isn’t discussing all the sweaty, half naked men grappling with each other. Or the gratuitous shot of Van Damme’s ass. (Yeah, he has a female love interest but she’s totally unimportant to the plot.)

“Bloodsport” somehow wasn’t satisfied with just being a “people being beat up” epic. Early on, we see Frank Dux abandon his military post in order to go fight. Throughout the rest of the film, he is pursued by two military agents. Played by an inexplicable Forrest Whittaker and Norman Burton, they fruitlessly chase after Dux. Every time they encounter him, “Bloodsport” collapses into hilarity. Some of this is intentional. During a light-hearted chase scene through the streets of Hong Kong, the cops are hopelessly behind Van Damme, who dances and mugs at their expense. Most of the laughs are unintentional. The guys keep brandishing taser at Dux. The one time they use them, he bounces the diodes off a pot lid, shocking a pair of near-by guards instead. Mostly, Whittaker and Burton seem ridiculously out of place. The subplot is hilarious if totally superfluous.

“Bloodsport” is funny throughout, though it’s hard to say how much of it is intentional. One source of constant amusement is Chong Li, the film’s super villain. Li is played by a hulking Bolo Yeung. Yeung doesn’t speak much and most of his lines sound dubbed. When he does speak, it’s to shout something intimidating. Mostly, Yeung glares psychotically. A wide-eyed crazy stare seems to be Chong Li’s default expression. At one hysterical point, Dux even imagines Li’s insanely starring face in the reflection of a bus window. The character’s sole motivation in life is winning. By the time he tosses dust in JCVD’s eyes, causing him to flail about blindly, the movie has reached peak ridiculousness. Yeung is hugely intimidating, which is all you need for a part like this.

“Bloodpsort’ is entertaining as fuck. It is ninety minutes of machismo-thickened goofiness. Van Damme does a split seven times, for god’s sake. A fifteen minute long flashback occurs at the very beginning. The action is brutal and impressively choreographed. The simple story is designed not to get in the way. The movie is full of good-natured silliness. It’s no surprise that multiple rentals from teenage boys would make the film a hit. And now those teenage boys are movie dorks, who both laugh at and embrace the campy qualities of films like this. [9/10]

[THE VAN DAMMAGE: 4 outta 5]
[X] An Entire Fight, Sans Shirt
[X] Close-Up Screaming
[X] Dancing
[] Jump-Kicks A Guy, Through Something
[X] Performs Either a Split or a Spinning Roundhouse Kick