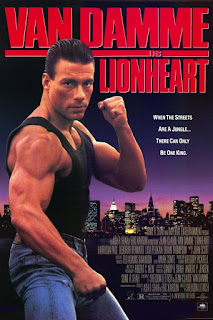 “Kickboxer” was Jean-Claude Van Damme’s first story credit. “Lionheart” is the second time the action star helped shape the plot of one of his films. Thus, “Lionheart” once again provides insight into how Van Damme wanted audiences to perceive him. Still early in his career, the Belgium star was eager to be seen as more then just the guy who kicks people in the face. “Lionheart” still features plenty of face-kicking. Yet it also provides its star with a juicy, emotional arc and far more crying then you’d expect.

Francois Gaultier is brutally burned in a drug deal gone wrong, dying soon afterwards. This leaves his wife and daughter without a husband and father. Francois’ brother, Lyon, is stationed in the French Foreign Legion. When he discovers his brother is dead, he abandons his post and travels to America. After sneaking into the U.S., he uses his fighting skills to win matches in underground fight clubs. Soon, Lyon’s fights earn him money, which he uses to take care of his sister-in-law and niece. Yet his struggles, emotional and physical, are just beginning.

Plot wise, “Lionheart” does not distinguish itself that much from Van Damme’s previous hits. As in “Bloodsport” and “Kickboxer,” he travels to a foreign country and fights in an underground martial arts tournament. (The country, in this case, is America.) As in “Bloodsport,” he ditches his military position, pursued across the globe by military polices. He’s even avenging a fallen brother again, in a round about sort of way. “Lionheart” foregoes the torturous training regimes and splits but that’s about it. Van Damme has gone back to this well for the third time. It wouldn’t be the last either. However, even this committed fan’s patience is beginning to wane.

Yet I said, this isn’t just a movie about covert kicking contests. “Lionheart” is as much drippy drama as fight movie. After his brother passes, Lyon attempts to forge a connection with his sister-in-law and niece. Helene initially rejects any help Lyon could give, thinking he’s involved in drugs like his brother was. She doesn’t want Lyon seeing Nicole, his precocious niece which immediately takes a liking to him. As the big fight approaches, Lyon has more interpersonal drama. Eventually though, after Lyon starts sending them money without announcing himself, Helene changes her mind. The woman who was formally backing his career turns against him. While avoiding the military police, he cracks a rib, endangering his chances during a pivotal fight. Far too much of “Lionheart” is devoted to Van Damme and friends having serious conversations about the plot. The ending, where the hero is reunited with his family, is especially maudlin and melodramatic. Those two words are a fair description of a lot of “Lionheart.”

“Lionheart” is still a fight movie though. And those fights are pretty great. Lyon doesn’t just sneak away from the Foreign Legion. Instead, he spin-kicks a guy into a pile of breaks, drives a knife into someone’s hand, and tosses people from a moving Jeep. Upon arriving in New York, he punches and knees a big black guy in the face. Amusingly, Lyon’s first “official” fight is over in seconds, after he smashes his opponent’s balls with one swift punch. The brawl with a shirtless Scotsman surrounded by cars is probably the campiest fight in the movie, where both characters are left punch-drunk. Then again, there’s the scuffle in a shallow swimming pool, where both Van Damme and his rival wear goofy leotards. My favorite fight is cut into suddenly and concludes with Lyon jump-kicking his burly adversary through a glass wall. After so much entertaining melee combat, the film’s climax – a bare-knuckle brawl between Lyon and a side-burned mountain man named Attila the Hun – isn’t as impressive. The fights are so brutal, with plenty of bloodied faces and snapped limbs, that even the MPAA tag felt the need to comment on them.

I may not be a huge fan of “Lionheart” but I agree with the consensus that it has a memorable supporting cast. Harrison Page plays Jonathan, the first in a long line of father-like mentor figures who would appear in Van Damme’s movies. The street smart black man who introduces Lyon to the world of underground fighting, Jonathan is frequently a source of outrageous comic relief. Page plays the exaggerated hustler with full gusto. He even makes the inevitable plot turn of Jonathan starting to actually care about Lyon believable. (Those on the look out for gay subtext might be disappointed as, despite a few manly embraces, the relationship between the two seems pretty platonic.) Also appearing in the film is Deborah Rennard as Cynthia, the promoter of the fights. Introduced in a thong-cut leotard, Rennard’s awkward attempts to seduce the weirdly asexual Lyon quickly turn sour. Her scene of violent rejection is hilariously overwrought. Afterwards, Cynthia becomes a cartoonishly evil villain, delighting in the hero’s punishment.

According to director Sheldon Lettich, “Lionheart” was a breakthrough film for Van Damme, making him more popular with female audiences. That’s understandable as “Lionheart” is a more sentimental story, focusing as much on the star’s ability to weep as his ability to kick. (The gratuitous shot of his bare ass probably didn’t hurt either.) Weirdly, “Lionheart” has a number of alternate titles overseas, including “AWOL,” “Leon,” “Wrong Bet” and “Full Contact.” This is probably because the titular pun – Lyon is nicknamed “The Lion” which evolves into “Lionheart” – wouldn’t translate well. The film is the first I’ve watched for this series that I didn’t find totally delightful. If this review comes off as too negative, that’s why. [6/10]

[THE VAN DAMMAGE: 3 outta 5]
[] An Entire Fight, Sans Shirt
[X] Close-Up Screaming
[] Dancing
[X] Jump-Kicks A Guy, Through Something
[X] Performs Either a Split or a Spinning Roundhouse Kick