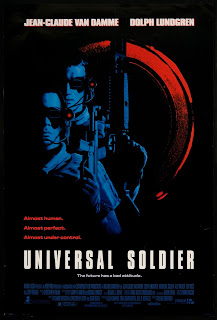 Don’t let my enthusiasm mislead you. Back in the early nineties, Jean-Claude Van Damme was a star and successful. However, even his most popular films by this point would mostly be considered B-movies. In the realm of mid-tier action flicks, a few rivals challenged Van Damme’s status as the master of the genre. The quickly emerging Steven Seagal, for one example, and Dolph Lundgren, for another. So when “Universal Soldier” brought Van Damme and Lundgren together in 1992, it was a big deal for action nerds. The film was also an early hit for German director Roland Emmerich, who would soon earn a brief reign as King of the Nineties Blockbuster.

In 1969, during the chaos of the Vietnam War, Sgt. Andrew Scott goes fucking crazy. He starts to murder innocent bystanders while wearing a necklace made of human ears. Cajun solider Luc Deveraux, who is just looking forward to going home, confronts Scott. Both men are killed in the fight. Their bodies are preserved by the U.S. government. Twenty five years later, both men are revived as Universal Soldiers: Genetically modified, cybernetically enhanced, totally obedient killing machines. Soon though, both Scott and Deveraux’s old memories and personalities begin to reemerge. Deveraux escapes with a female reporter, seeking out his childhood home. Scott begins to obsessively pursue the other solider, brutally murdering everyone who opposes him.

As a Van Damme vehicle, “Universal Soldier” is different then the star’s usual flicks. It’s classier then “Cyborg,” his previous sci-fi opus, even if it’s obviously indebted to “The Terminator” and “RoboCop.” By playing an emotionless automaton, Van Damme’s eccentricities and sweaty humanity are restrained. His character isn’t a martial artist either, meaning there are fewer high-kicks and splits then expected. (No splits at all, actually, but still a few kicks.) For the first half, Jean-Claude is playing a robotic humanoid who slowly regains his humanity. I’m not even kidding when I say he actually gives a good performance. At first, his body language is perfectly stiff while odd nuggets of personality slip through. By the end, Luc Deveraux is a person again, which he gladly signals by referring to himself as “alive” for the first time. By playing a weirdo robot person, the movie also has a lot of opportunities for humor.

As far as late eighties action stars go, Dolph Lundgren isn’t as fascinating as JCVD. Yet he has charms of his own. In “Universal Soldier,” Dolph plays an unhinged bad guy. As a robotic executioner in the early scenes, he’s great. Barely human villains are something Dolph has experience with. After his programming fades away, Sgt. Scott becomes more deranged. He indiscriminately murders people. He drags dead bodies into a grocery store before shooting it up. Not only does he make himself a new ear necklace, he collects mementos from all his victims’ corpses. The script provides the character with multiple monologues, expressing his genocidal tendencies. Speechifying at great lengths is not Dolph’s greatest strength. He undeniably stretches his acting abilities to their limit. Yet Lundgren is still having fun playing a psychotic villain and makes more then a worthy adversary for Van Damme.

“Universal Soldier” has a third lead who doesn’t kick anybody in the face. Ally Walker plays Veronica, the news reporter who ends up tagging along with Luc. Some have referred to Walker’s character as annoying but I kind of like her. She’s got a good energy, provides some humanity while Van Damme is robotic, and drives the plot along during its slower moments. At least Walker is more endearing then the broad comic relief characters that pop up along the way. Like the obnoxious hotel owners or buffoonish gas station attendant. (This is the kind of dumb humor that would ruin Emmerich’s later films.) Which isn’t to say that “Universal Soldier” isn’t funny. As part of his UniSol programming, Deveraux stripes nude when overheated. This leads to some amusing shenanigans, when he wanders into public areas while naked. When Luc discovers food again, he woofs down six or seven plates at a roadside dinner. When he can’t pay for the meals, a bar room brawl erupts. Van Damme, naturally, wins. It’s all pretty goofy but in a way I can dig.

And as an action flick, “Universal Soldier” piles on the explosive set-pieces. The shoot-out at the dam early on is well executed, with some organized shooting and dodging. (If nothing else, Dolph and Jean-Claude both look awesome in their UniSol outfits.) While Dolph unleashes machine guns through a hotel, Van Damme leaps through walls and dodges explosions. Lundgren’s rampage includes setting off a grenade in a confined area and diving through a windshield. A stand-out sequence in the back half includes a bus chase that features many explosions, gunshots, and concludes with both vehicles plummeting into the Grand Canyon. The final showdown between Dolph and Van Damme is damn satisfying, as both men kick and punch their way through a barn. Luc gets some one-liners – like “Discharge, Sarge!” – but they’re pretty bad. The fight is much better.

Seeing two icons of action cheese collide is definitely worth the price of admission. “Universal Soldier” is cleanly directed with a lot of fun, stand-out action sequences. Both Jean-Claude and Lundgren are in top form, amusing the audience and kicking a lot of ass. Like a few of the Belgian’s classics, “Universal Soldier” has a weird legacy. Two direct-to-television sequels without either of the primary stars would soon appear. Van Damme would come back for a theatrical sequel that ignored the TV spin-offs. The Asylum produced a nearly identically entitled rip-off for some reason. Years later, a new pair of critically acclaimed sequels would be released, bringing back both Van Damme and Dolph, and ignoring all prior continuations. But more on those later. The original “Universal Soldier” is a nice chunk of action satisfaction. [7/10]

[THE VAN DAMMAGE: 3 outta 5]
[] An Entire Fight, Sans Shirt
[X] Close-Up Screaming
[] Dancing
[X] Jump-Kicks A Guy, Through Something
[X] Performs Either a Split or a Spinning Roundhouse Kick

Any relation to the 1971 film in which George Lazenby plays a rogue arms dealer?