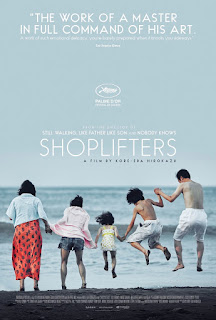 To we feeble film nerds idling away in obscurity here in America, the Cannes Film Festival seems like this mysterious event happening in a far away land. While the Oscars generally award highly marketable or at least easily accessed motion pictures, the top prize awarded at Cannes usually goes to foreign language film. While a Best Picture win causes a movie to go down in cinematic history, the Palme D'or winner are often forgotten or at least overlooked. At least, that's how it seems to be in American film fandom. Maybe it's different in Europe. This is my long-winded way of introducing “Shoplifters.” A Japanese film, it won the Palme last May and is now nominated for Best Foreign Language Film. Some are saying it might even have a chance to win the honor.

Somewhere in Tokyo lives a family. Father Osamu, mother Nobuyo, and step-sister Aki all have menial jobs – and grandmother Hatsu's pension – but it's still barely enough to make ends' meet. In order to further provide for themselves, the entire family shoplifts food and other goods. After a successful night at the grocery store, Osamu and son Shota spot a little girl shivering in the cold. After discovering that her parents beat her, the little girl is adopted into the family. Changing her name from Yuri to Lin, she quickly becomes part of their life. The group live their lives, challenges and joys arriving. As Shota begins to feel uncertain about the shoplifting life style, secrets are revealed.

I grew up in a poor neighborhood pretty far away from the poor neighborhoods of Japan but there was so much I recognized in “Shoplifters.” The entire family, five people at first, six after Lin arrives, crowd into grandma's house. And Hatsu appears to be a bit of a hoarder too, making the small, unkempt home especially cramped. Osamu, Nobuyo, and Aki all work – at a construction site, a factory, and a peep show – but hours and pay are still in short supply. The family steals not just because it gives them a thrill but because they frequently have to in order to survive. While director Hirokazu Kore-eda beautifully captures the details of this lifestyle, he doesn't let it define the characters. They have little joys in their lives, like enjoying a corn dog on the beach or the kids discovering a hatching cicada in the park. When you have so little, these little moments matter even more.

As “Shoplifters” go on, you get the idea pretty quickly that everyone came to this family the same way Yuri/Lin did. Aki is the black sheep of her family, rejected in favor of a more successful younger sister. Shota was stolen by Osamu out of a car he was locked in. Hatsu is a lonely old woman that took them all in. As with Lin, they changed their names upon being accepted into this make-shift family. Unlike their birth families, which were neglectful or abusive, this is a family they all chose. When inevitable loss arrives, it's exactly the same as loosing a loved one. Though some of them, Shota especially, are reluctant to accept this connection, it is the make-shift heart that drives “Shoplifters.”

In a way, every member of Osamu and Nobuyo's family was “stolen” from someone else. Ultimately, “Shoplifters” has to grapple with what ownership even means. They break the law largely to survive, though not always. Shota starts to feel guilty about this as he sees Lin, not much older than a baby, being indoctrinated into an illegal lifestyle. This is only the first of several moral ambiguities in the household. The last third is built upon revealing the horrible truths behind this arrangement, breaking the hearts of the characters and the viewers. Yet, as the deeply poignant conclusion shows, the grim facts behind their bond doesn't make it any less meaningful, does it?

I haven't seen any of Horikazu Kore-eda's other films, though many of them are well regarded. Based on the merits of “Shoplifters,” I'm willing to say this guy knows what he's doing. This is a powerful film, poignant and gritty but frequently very funny. You grow close to this cast of characters quickly, relating to their struggles and cheering for their small victories. (The extremely talented cast helps a lot.) Roger Ebert said that movies are empathy generating machines. “Shoplifters” is a great example of this principal, being one of the most humanistic and touching films I've seen in recent memory. [9/10]