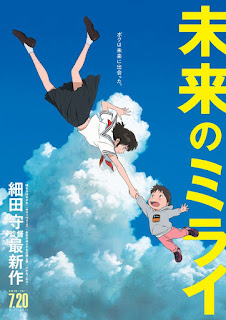 The question must be asked: Does the Academy of Motion Picture Arts and Science like anime? The evidence suggests an uncertain answer. Yes, the Academy has nodded at Japanese cartoons a few times since the Best Animated Feature category's introduction, even giving “Spirit Away” the Oscar in 2002. But Studio Ghibli, brilliant as their output frequently is, is also about as mainstream and accessible as anime gets. It's not like Oscar ever gave any time to stuff like “Paprika” or “I Want to Eat Your Pancreas.” Could it be possible that is about to change? “Mirai,” from critically acclaimed director Mamoru Hosoda, is the first non-Ghibli anime feature to get an Oscar nomination. It probably won't win but that it got included at all is pretty neat.

Four year old Kun is pretty comfortable in his life. He gets to play with his toy trains all day, chases family dog Yukko around, and has the full attention of his mom and dad. That is until his mom brings home his new baby sister, Mirai.  Kun immediately resents how his parents spend more time with the baby than him, quickly deciding that his little sister is the worst thing to happen to him. After mom goes back to work, Kun has an unexpected visitor. A magical garden appears outside the house and he meets the teenage version of Mirai – identifiable by the distinctive birthmark on her hand – who has traveled into the past. As he struggles with the new responsibilities of being a big brother, he will have more adventures traveling through time.

“Mirai” is pretty damn adorable. Kun is a realistic depiction of a young kid learning to live with a little sibling. Kun has a laser point focus on his favorite hobbies – trains, to the point that he suggest his parents name his little sister after various bullet trains – and doesn't yet understand that mom and dad have interests or histories beyond him. His behavior is appropriately bratty at times. He throws one of his trains at Mirai, cries and has temper tantrums, proclaims he hates his sister or that his parents don't love him. Even before the film's science-fiction elements are introduced, the boy is prone to flights of fancy. Like imagining his mother as an angry onibaba when she gets annoyed with him. This accuracy extends to the parents as well. Rising a kid is depicted as the hardest job in the world but the pay-off is worth it, like when Kun's father is brought to tears by his son's accomplishments.

Though I just called it sci-fi, “Mirai” belongs more accurately to that often-mocked genre of magical realism. No explanation is ever provided how or why Kun and his sister travel through time. Instead of being on world-saving business, Mirai travels back in time for strictly whimsical reasons. While in the magical garden, Yukko becomes a grouchy human... Who still acts a lot like a dog. (At one point, Kun steals Yukko's tail and becomes part puppy dog himself.) The film gets increasingly surreal as it goes on, ending with Kun arriving at a nightmarish train station full of strange touches: A creepy robotic coach, talking vehicles, a dragon-shaped train, giant cat bells. This certainly provides opportunities for gorgeous animation, especially during the scenes of fast-paced movement or the emotional climax.

“Mirai's” plot is largely episodic. Throughout the film, Kun meets up with future or past versions of family members, learns something on his adventure with them, and then applies that knowledge to his present life. An especially touching sequence has him traveling back to post-war Japan. Eventually, though, the film builds these largely stand-alone stories into a bigger, heart-tugging theme. “Mirai” is about how we are each the result of choices made long ago, how small decisions can leave huge ripples through time. Moreover, through a powerful montage, “Mirai” suggests that pain connects us and love, familial or otherwise, is what can heal us. It provides a very touching conclusion to a film that was extremely likable and sweet up to that point.

Considering Oscar voters' obvious disinterest in anime, it's exciting that “Mirai” got nominated at all. The film's universal themes of sibling bonding, family, and memories still makes it pretty accessible as far as anime goes, though it's still a weirder film than that suggests. I can only assume that heavy campaigning from GKids, who have become experts at getting indie animation noticed by the Academy, can be thanked for this. While I don't expect the fourth “Rebuild of Evangelion” movie to get nominated next or anything like that, it would be awfully cool if some non-Ghibli anime got further recognition in the Best Animated Feature category. All of that aside, “Mirai” is an absolutely lovely film, beautifully animated and conveying its themes in a touching and effective manner. I think it's easily my favorite of all the 2019 nominated films I've reviewed thus far. [9/10]