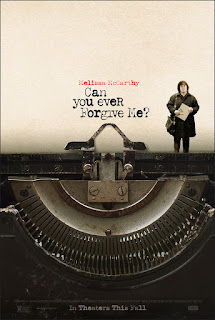 Listen, everyone knows that certain tactics will potentially get an actor attention from the Academy. Biopics, about miraculous true stories or famous historical figure, are always a good bet. A comedic actor changing things up with a serious performance is also a commonly employed exercise. 2019 brings its fair share of biopics and true stories. Melissa McCarthy previously received an Oscar nomination for “Bridemaids” but, after appearing in a number of increasingly dire comedies, decided to shift towards drama with “Can You Ever Forgive Me?” While all of this sounds horribly trite, the movie is apparently actually pretty good.

McCarthy stars as Lee Israel, a professional biographer who has fallen on hard times. Lee is drinking too much, writing too little, and unable to convince her agent about the Fanny Brice biography she's currently working on. Desperate, largely because her beloved cat is sick, Lee sells some personal letters from famous figures she's come across. Realizing you can make some quick cash this way, and that a more interesting letter is worth more, Lee starts to forge letters from people like Noel Coward or Dorothy Parker. Lee makes a friend, in the form of hopeless hustler Jack Hock, and things actually work out okay for a while. Until the FBI gets a whiff of Lee's forgery business, forcing her to even more desperate measures.

When we first meet Lee Israel, she's in a bad mood. As the film continues, it's apparent this bad mood has lasted most of her adult life. She argues with her agent, who chastises her for her bad behavior. She's lonely at a party. She finds most people trite. Yes, “Can You Ever Forgive Me?” is a movie about a misanthrope defrosting. However, this doesn't happen through some dramatic contrivance. Instead, Lee comes more alive by doing what she loves more passionately. The film never judges her for preferring cats over most people, nor for her tendency to drink too often. Her status as a gay woman is treated matter-of-factly. The script realizes that these elements do not need to be defended, that Lee is plenty interesting without softening her quirks or emphasizing her preferences.

“Can You Ever Forgive Me?” is also, surprisingly and delightfully, a film that argues for the value of pastiche. When Lee tries to sell one of the genuine letters she comes across, the dealer tells her the subject matter is boring. After spicing the letter up with her forged post-script, its value goes way up. What Lee does is a crime, though pretty small potatoes by most measures. Yet there's value in her work as well, in so accurately capturing the wit and wisdom of another voice. This concept – that imitation is art itself, that it can even be better than the real thing – is gracefully conceived in the film's funny and poignant final scene. 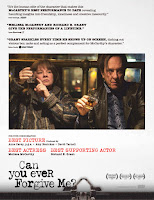 Perhaps more than anything else, “Can You Ever Forgive Me?” is an actor's film. As a comedic actor, Melissa McCarthy's antics can sometimes be unbearably broad. Yet any “Gilmore Girls” fan knows that she is capable of bringing a likable humanity to her parts. As Lee Israel, McCarthy impresses like never before. She creates a lived-in weariness. Even in the scenes where her gruffness or smart-ass streak gets laughs, there's a sad sense of resignation under everything. Lee has had her talented denied for so long and it's starting to piss her off. This sense of humanity makes McCarthy's big showy moments – her climatic testimonial before the judge, her grieving over a beloved pet – genuine sources of pathos.

As good as McCarthy is, and she's really good, another performer outshines her. Richard E. Grant has been playing scoundrels and rebels his entire career. With Jack Hock, Grant aligns all those qualities into one character. Grant brings an amazingly acerbic wit to the part, as Hock always has a witty comeback or crude one-liner up his sleeve. He especially love committing acts of mischief. He's also a chronic screw-up, spending what little money he has on drugs, booze, and rent boys. As pathetic as Jack may be, Grant never allows the character to be played as a sad queer character. Instead, he's a deeply flawed human, with as many good qualities as troubling ones. Grant's incredible command of humor and spirited performance will, if there's justice in the world, make him an Oscar winner. 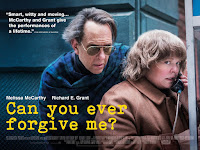 Going in with few expectations, I found myself liking “Can You Ever Forgive Me?' more than most of the Best Picture nominees. It handles real world issues without ever being melodramatic or lingering, simply drawing these themes into the fabric of a touching and funny story. Held up by two fabulous performances, “Can You Ever Forgive Me?” is a wonderfully entertaining and cozy motion picture about the creative process. It's sort of a bummer that a film this likable is unlikely to take home any golden statues at the end of the month. Not that I imagine Lee would care too much about that. She was used to her best work going unrecognized. [8/10]