After the massive success of “Godzilla vs. Mothra,” it was only natural for Toho to continue to revive Godzilla’s classic foes. The simply titled “Godzilla vs. MechaGodzilla,” which gained a roman numeral two when dubbed for American audiences, brings back the most memorable of Godzilla’s enemies from the late Showa period. The ticket sales of the previous entry must have embolden Toho though since the movie is even more ambitious then that. The film also resurrects another long-time adversary, the legendary Rodan. It even manages to update one of the most widely revived characters in the series for more modern sensibilities. Out of the gates anyway, “Godzilla vs. MechaGodzilla II” seems like it will be a great time.

The script starts with the rather realistic assumption that, if giant monsters were burning Tokyo to the ground on a regular basis, the United Nations would want to get involved. In 1992, the world’s governments form a scientific, military organization designed to stop Godzilla once and for all. Two years later, they reveal the fruits of their labors. The first, a giant airship called the Garuda, is mostly sidelined in favor of UNGCC’s second advancement: The titular MechaGodzilla, a life-sized robotic copy of Godzilla. Meanwhile, a scientific team investigates polluted Adonoa Island. There they discover Rodan, a giant pterosaur that quickly comes into conflict with Godzilla. They also find an egg which quickly hatches to reveal a baby Godzilla. Resident telepath Miki and the creature’s caretaker Azusa quickly realize Baby shares a psychic connection with both greater monsters. The military devises a plot to lure Godzilla out using the infant critter so MechaGodzilla can exterminate the King of the Monsters.

The screenplay for “Godzilla vs. MechaGodzilla II” is far more focused then “Godzilla and Mothra: The Battle for Earth.” The script manages to organically weave four different kaiju into one story. The scientists who have built MechaGodzilla are obviously interested in other giant monster activity, which is why they find Rodan and Baby Godzilla. Rodan and Baby are connected, both being born in the same nest. And the infant dinosaur is clearly connected with Godzilla, giving him a good reason to march on Japan. The young reptile is utilized to lure both monsters out and the scientists studying his anatomy reveals Godzilla’s weakness. Furthermore, Rodan shows up to neatly resolve a plot line later in the movie. MechaGodzilla is actually the least important of the film’s daikaiju, not motivating the plot, simply being a weapon used in it.

Among all the monster action, the movie even makes room for some fairly compelling human drama. Kazuma Aoki, played by Masahiro Takashima, is set up as the film’s hero. He’s a pterodactyl obsessed pilot and inventor. When his Garuda battle ship is sidelined in favor of MechaGodzilla, he keenly manipulates one of the project scientists. It’s his ingenuity that saves the day, temporarily anyway, when he combines the Garuda with MechaGodzilla, making both more powerful. When not building weapons of mass destruction, he builds cute little air-gliders shaped like pterodactyls. Aoki might be the film’s hero, and Takashima imbues him with enough charm, but he’s not its most charming character.

That honor falls to Azusa Gojo, played by the lovely Ryoko Sano. Azusa is put in charge of taking care of Baby Godzilla. The little monster quickly adopts the woman as its mother. She talks to him, pets him, shares her fast food burgers with him, and even plays game with him. This charming subplot nicely occupies the film’s battle-free middle section. I don’t know about all the other Godzilla fans out there, but I’ve always wanted to have my very own kaiju as a pet. For fans with similar wishes, this subplot is bound to tuck at their heartstrings. It helps that the movie never forgets that cute little Baby is going to grow up into a city wrecking monster, frequently referencing the fact. When the two are forced to separate at the end, both shedding tears, it should probably be ridiculous. Yet the viewer has invested in Azusa and Baby enough that the scene truly gets to them. The movie even finds a bigger role for Miki Saegusa, putting the underutilized and always interesting character in MechaGodzilla’s cockpit.

Considering all these factors in its favor, you’d think I’d like “Godzilla vs. MechaGodzilla II’ more. The film has one major problem. The audience doesn’t know who to root for. Godzilla is a destructive force of nature that has claimed thousands of lives and bound to claim a thousand more. However, the scientists behind MechaGodzilla are far from sympathetic. They set about dispatching Godzilla, using the innocent Baby as bait, much to Azusa’s chagrin. When MechaGodzilla finally deploys his Godzilla-killing secret weapon, it’s not a heroic triumphant. The King of the Monster is cruelly defeated, held down, paralyzed, bombarded with lasers and missiles. Even if the Heisei Godzilla is a city-wrecking asshole, the audience still likes the guy. Even the film is uncertain about who to like. While Godzilla is in his death throes, Miki watches, doubting her actions. The only truly sympathetic characters are Asuza and Baby Godzilla, both of whom are pushed around by the plot’s whims. 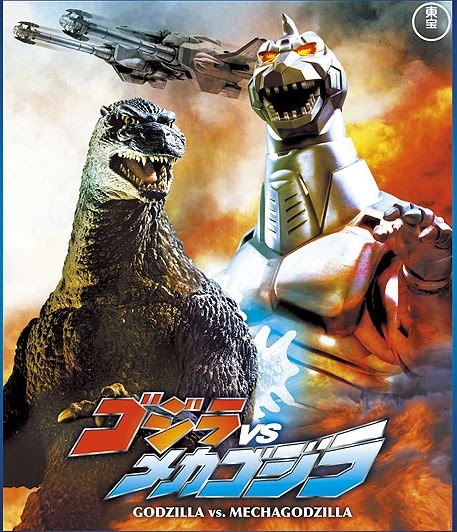 Another problem facing the film is that this new version of MechaGodzilla is not horribly engaging. The Showa MechaGodzilla had a rough design, fitted out with rivets and steel plates. It looked like the result of a seven year old asked to draw a robot Godzilla. And I mean that as a compliment. The Heisei MechaGodzilla, on the other hand, is all smooth surfaces. His joints are rounded and his limbs are perfectly symmetrical. The posture is too upright, too human-like for my taste. The robot looks too much like a ready-made toy. This is further confounded when it combines with the Garuda, something straight out of a mecha anime. The original MechaGodzilla was built by aliens, an artificial intelligence designed to conquer Earth. This MechaGodzilla is a machine built by humans to save the world. It’s less a character then it is a vehicle. All of this is perfectly logical and the machine being reverse-engineered from the remains of Mecha-King Ghidroah is a nice touch. However, the script wound up creating a rival to Godzilla that totally lacks any personality.

The film’s revival of Rodan is far more successful. Though obviously an iconic monster on nearly equal footing with Godzilla, Rodan always has an awkward, borderline comical design. Effects supervisor Koichi Kawakita has completely streamlined the monster’s design. Rodan looks far more like a realistic pterosaur then ever before. The head, in particular, is fantastically realized. The monster’s thin neck, long beak, and wide eyes not only looks better then the squat-nosed Rodan of the sixties but it’s also far more memorable. The flying monster moves realistically too, soaring through the air in a logical fashion. Via a late film upgrade, Rodan even gains a long-overdue projectile weapon. Like Godzilla, the winged beast can now breathe fire. Though one of the more radical Heisei redesigns, it’s also one of the best.

The movie also successfully reclaims the concept of Godzilla having offspring. Or, at least, raising a young member of the same species. Minilla has been widely derided over the years for being far too goofy a character. The movie, smartly, doesn’t try to emulate the original design. Baby Godzilla is far more plausible, looking largely like what you’d expect a baby Godzilla to look like. He’s cute without being coying and his antics are never as ridiculously overdone as Minilla throwing a temper tantrum. Realistically, the human-sized dinosaur is frightened by Godzilla when they first meet. It takes some psychic prodding from Miki to make the two friendly. Fans at the time were probably skeptical of the movies reestablishing the Son of Godzilla but the film pulls it off.

The battles between the kaiju are massively entertaining. The early battle between Godzilla and Rodan is a highlight. It’s great to see some of the monster’s trademark moves maintained. Rodan holds Godzilla down, pecking at his head. Because this is the supped-up nineties, Rodan’s beak makes sparks when striking Godzilla’s head. The tussle on the island is mostly done in close-up, the two monsters tossing each other in to mountains and burying one another under rocks. Godzilla’s march through the ocean-side refinery features some nice explosions and building smashing. Rodan’s famous move of exploding objects by flying over them at supersonic speeds shows up too. The pterosaur destroying a helicopter and then catching the crate it was carry in its claws sure seems like an unlikely event but I liked it anyway. The flying kaiju’s last minute battle with MechaGodzilla is a good time too. I especially like when Rodan is thrown back into a building, collapsing the skyscraper. That’s a good moment.

MechaGodzilla’s arsenal is certainly impressive even if further robs the monster of any humanity. It can shoot a rainbow-colored laser from its mouth, a special electro-beam from a hole in its chest, missiles from its shoulders, and electrified grappling cords from its wrists. In the first battle between the Godzillas, the robotic copy seems to gain the upper hand at first. At least until the original makes a surprising come-back. Since the new MechaGodzilla is so soulless, the audience really wants to see Godzilla defeat him. When that defeat comes, it’s epically satisfying. Godzilla melts the robotic copy’s armor by generating a nuclear atmosphere and then blows him away with one super-charged atomic blast.

The last act is depended upon a series of unlikely events. The cries of Baby Godzilla calls Rodan to the city, which seems reasonable enough. However, the flyer doesn’t stand much of a chance against the heavily armed robot. Earlier in the film, we discover that Godzilla has a second brain at the base of his spine, similar to a long debunked theory concerning the dinosaurs. (Though considering Godzilla is far bigger then any dinosaur ever was, perhaps it makes more since) The secret to defeating the monster lies in targeting this second brain. This is exactly what MechaGodzilla does, blowing up the secondary brain and crippling Godzilla. After a series of missile barrages, the UNGCC successfully kills Godzilla. That would have made for a downer ending, at least until Rodan flies in, drops down on the Big G and, with his dying breath, gifts Godzilla with his nuclear energy. The monster is revived and proceeds to kick some major ass. Is this contrived screenwriting? Most definitely. Is it also a fairly daft way to handle the movie’s various subplots? I’d say so.

Akira Ifukube’s score is typically powerful. The original Rodan theme gains a fresh coat of paint while MechaGodzilla’s new heroic theme works very well. Takao Okawara’s direction is a bit on the somber side but nevertheless effective. The film attempts a theme of “nature vs. technology” but very little in the actual story supports this. While there’s a lot to like about “Godzilla vs. MechaGodzilla II,” a soulless opponent and uncertain screenplay keeps it from reaching the heights of the previous three entries. [Grade: B-]
Posted by Bonehead XL at 11:59 PM