Obviously, 2020 did not go the way anyone was anticipating. I'm not going to regurgitate the horrifying details but living through major historical events is utterly exhausting. Is this what people in the late sixties felt like? With the state of the world and my country being what it is, autumnal holidays and rituals must seem entirely trivial. Some have even gone so far as to say that 2020's Halloween is canceled.
To me, this is, of course, a ridiculous statement. Yeah, the kids probably won't be able to trick-or-treat in 2020. The pandemic might just be the final nail in the coffin for that faltering tradition, which makes me deeply sad. Halloween parties, parades, haunted attractions, and other community gatherings will surely be greatly discouraged this year. But here's the truth – and this is so true, that there aren't many things I believe more – we need Halloween more than ever this year. 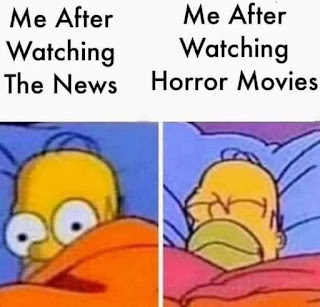 I saw a meme a while ago, which captioned a picture of Homer Simpson starring in dumbfound shock with “me after reading the news.” The second image was Homer sleeping snugly in bed, which was captioned “me after watching a horror movie.” There's been some research into the topic of how people with anxiety actually operate better during tragic situations. When you spend every waking hour mentally preparing for the worst, you may find yourself more ready when the worst actually happens. As a deeply nervous person, I find my love of horror is rooted in similar feelings. Horror is validating. Horror tells you everything isn't going to be okay. In the cases where the struggle is overcome, when the monster is vanquished, it feels more earned.
As the holiday most closely associated with the macabre, Halloween fills me with similar feelings. I've rambled on before about the spiritual significance this season has for me. Maybe a holiday devoted to honoring those that passed before us, to connecting us with the dead, to letting the spooky into our lives for six weeks, is especially needed right now. The thought that Halloween could be canceled is absurd. Halloween isn't a day. It isn't a handful of celebratory get-togethers. Halloween is a state of mind. Halloween is a way of life. It lives inside us, within our hearts.
Celebrating Halloween, looking forward to celebrating Halloween, often keeps me sane through the first nine months of the year. I needed a lot of sanity in 2020. So here we are at the Halloween Horror-Fest Blog-a-thon. I'm going to watch as many horror movies as I can in the next six weeks. I am going to pig out on candy, junk food, and cider. I am going to indulge in every spooky thing I responsibly can. Holy fuck, do I need it this year.
Now that we've established why the Halloween Horror-fest Blog-a-thon is such a necessity for me this year, let's talk about what it will entail. As always, I've got plenty of plans. For a while now, I've been wanting to expose myself to one of those horror series with a ton of entries despite nobody seeming to actually like them. Largely out of a sense of morbid curiosity and, I don't know, masochism. After debating whether I wanted to suffer through every “Children of the Corn” or “Amityville Horror” movie, I finally decided to sit through the haunted house flicks. Granted, I am limiting myself to the ten “official” entries in the series. Due to the public domain status of the “true” Amityville story, there's at least fifteen additional films which have the word Amityville in the title but nothing else to do with the notorious case. (A new one comes out next month.) I won't be watching those. I don't hate myself that much. 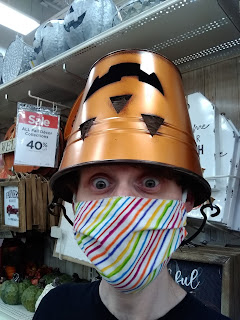 In addition to that sure-to-be-arduous trek, I've decided to watch two other horror series that, while not quite that long-running, have always baffled me with their longevity. That would be the “Species” and “Wishmaster” films. Both of those tally four installments, so it won't add too much to my watch list. JD, my former podcast co-host and best buddy, has been trying to get me to watch the “Wishmaster” movies for years, so I guess I”m finally doing that.
This year, I'll also be doing something I've long wanted to do. The great Jose Mojita Marins – otherwise known as Coffin Joe, Brazil's first horror icon – passed away this year. Many of his films are hard-to-find here in America but, thanks to some friends of mine, I've managed to collect all of the Coffin Joe flicks as well as a few of Marins' other horror movies. That's going to be a wild journey through the mind of an obscure, sleazy genre visionary. Of course, I've got a ton of other movies on my list for 2020's Six Weeks of Halloween.
On the TV side of things, I'll be continuing two traditions from last year. That would be watching the final season of vampire cop show, “Forever Knight” and sampling choice episodes from a number of classic anthology shows. In fact, I enjoyed the latter adventure so much last year, I've doubled the number of anthologies I'll be sampling. Last year, I managed to finish my quest to consume every “Tales from the Crypt”-related television episode. But, honestly, I miss those gruesome but ironic E.C. Comic stories. So this year I've decided to watch Shudder's “Creepshow” series as well. It might lack John Kassir cracking cheesy puns via a robot corpse but I think it'll scratch a similar itch.
Normally, I devote paragraphs in these preambles to what horror movies will be out in theaters or what other Halloween-y events I'll be attending throughout the Six Weeks. Obviously, that is not a going concern right now. Most of the year's buzziest new horror releases will, like “Antebellum,” be releasing through V.O.D. or, like “A Quiet Place: Part II” or the new "Candyman," will be coming out at some unspecified point in the future. (Though a few horror releases, like "Come Play" and "The Wolf of Snow Hollow," will be daring film-goers to brave theaters this October.) I will try and catch up with some indie titles that have gotten hype this year. I will not be attending any horror conventions or haunts in 2020 because there aren't any happening. Duh. 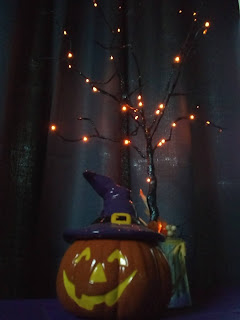 Now the table is set. The ritual can begin. Are you ready? Do you have your mask, your grinning Jack-O'-Lanterns? Your black cats? Are you ready to trick-or-treat until you're sick? To raise hell and honor the dead until the vampire bats come back to roost? Good. The gate is open. The spirits live in me. It's okay, they don't bite much. The Autumn Country... I can see it, hear it, taste it. It feels like home. Step inside. The 2020's Halloween Horror-Fest Blog-a-Thon is upon us now.
Posted by Bonehead XL at 5:42 PM