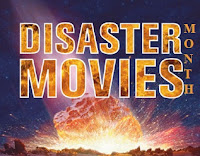 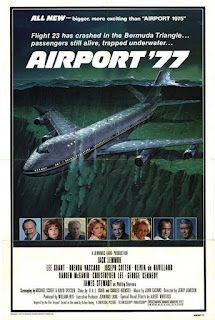 By 1977, the disaster movie trend was starting to run out of steam. The genre wouldn't completely die off until the end of the decade but the public's interest was beginning to wane. Universal Studios, however, clearly thought otherwise. They would release two more disaster flicks in 1977. One of which was the third film in the “Airport” series. “Airport '77” has the somewhat dubious distinction of being one of the better reviewed films in the series. While critics were actively scornful of the first two, a handful admitted to sort of liking this one. While less popular than the 1970 and 1975 editions of the series, it was still a sizable hit. Weirdly, it seems to have made the least impact on pop culture out of the four films.

Millionaire art collector Philip Stevens has sent a private jet to transport the latest additions to his estate in Palm Beach, Florida. Aboard the luxury jumbo jet are a number of people, including Stevens' daughter and grandson, who are enjoying the highlight. This glee is interrupted by the co-pilot, who has plotted a high-jacking. They knock the crew unconscious with sleeping gas and intend to hold Stevens' artwork hostage. Instead, they accidentally strike an oil platform. The plane crashes into the Bermuda triangle, sinking beneath the sea. The reawaken crew struggle to escape the waterlogged plane before it totally fills full of water.

The previous two “Airport” had a bit of a problem, story-wise. In order for a commercial jet full of people to be threatened, it had to be in the air for a while. So you had a secret bomber not revealing himself until well into the flight in “Airport” and a mid-air collision in “Airport '75.” “Airport '77” found a rather novel way to mix up the formula. By downing the plane underwater, the characters are trapped in an entirely different way. The stakes seem much higher, as the plane is completely incapacitated. (An underwater plane is a scarier place to be then a plane that's still working, even with a hole in its side.) The constant threat of the ocean leaking into the plane's interior, the vehicle slowly giving into the water pressure, creates a more suspenseful story. It gives the impression that there's no time to spare. Everyone might be crushed at any point.

I'd say the film has the strongest ensemble of any “Airport” movie. But I might be slightly bias. Jack Lemmon, Christopher Lee, and Darren McGaven are all performers I love. Lemmon's sad-sack everyman qualities are well utilized as a pilot down on his luck. Lee is perfectly cast as a man who seems gruff on the outside but hides a caring, courageous heart. McGavin plays a chatty smart-ass, which is something he's exceedingly good at. Lee Grant is amusing as Lee's alcoholic wife. Jimmy Stewart smiles warmly. M. Emmett Walsh is solid as a veterinarian called upon to serve as the team doctor. And, of course, George Kennedy shows up as Joe Patroni, though his part's much smaller this time. Joseph Cotten and Olivia de Halivand are somewhere in there too.

The last two “Airport” movies are also characterized by rescues mission that go horribly wrong. “Airport '77,” meanwhile, actually employs some competent heroes. After Lemmon makes it to the surface, he quickly gets in contact with the U.S. Navy. They engineer an elaborate plan to raise the plane to the surface with giant balloons. Whether or not the crazy-seeming plan will work also generates some decent suspense. A note before the end credits reminds the viewer that the film's story is fictional but the techniques the Navy use in the film are real. And it makes for a pretty neat ending, the drowned plane being plucked out of the sea.

“Airport '77” is the film in the series that probably comes the closest to being anything more than a goofy pop corn movie. That's still basically what it is, and I don't consider that an insult. The dull pace of the first and the campy humor of the second are ejected. In their place is a really strong cast and some actual solid suspense. The film would, surprisingly, receive two Oscars nominations. Not for Best Song, though the film includes a sappy ballad clearly in the hopes of grabbing one. Instead, it got nominated for Costume Design and Art Direction. Art Direction I can sort of see, as the inside of the jet is pretty swanky. Costume Design seems like a somewhat random nod. I guess what I'm saying is: If you see one “Airport” movies, see this one. [7/10]