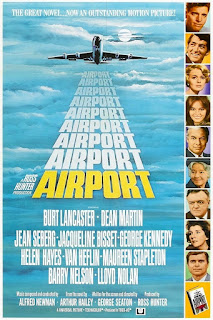 I can't blame Arthur Hailey for sticking with what worked for him. After writing “Flight into Danger” and “Zero Hour!,” the former World War II pilot created a similarly themed novel. “Airport” would become a best-seller in 1968. When Hailey's novel was adapted to film in 1970, it was with a star-studded cast and a big budget. The cinematic “Airport” would become a massive hit, surpassing “Spartacus'” record as Universal's highest grossing film. It was the second highest grossing film of the year. It would even win an Academy Award. As a result, “Airport” would throw open the floodgates, leading to a wave of disaster movies with big cast and even big spectacle. Whether or not “Airport” actually holds up as a decent movie is another matter all together.

It's another hectic day at Lincoln International Airport. A severe snowstorm has blown in, causing grounded flights and hazardous flying conditions. Workaholic airport manager, Mel Bakersfield, has to deal with a dissolving marriage in addition to everything else. Checkpoint captain Vernon Demerest's marriage is also in trouble, as he's recently discovered that his stewardess girlfriend is pregnant. Into this situation enters D.O. Guerrero, a down-on-his-luck demolitions expert. Having taken a large life insurance policy out on himself, he sneaks a bomb onto the the Golden Argosy, the plane Demerest happens to be flying. Forces both in the plane and on the ground work together to prevent a horrific crash.

“Airport's” massive box office success in 1970 is a testament to how much blockbuster cinema has changed in the last 48 years. “Airport” is not a thrill-a-minute roller coaster. Instead, it's an almost painfully slow movie. The airplane doesn't even take off until over an hour in. Before the plot can really get going, the movie takes the time to develop every single supporting character and subplot. Once the plot of a bomb on a crowded passenger jet actually begins to move, “Airport's” pace is still shockingly laggard. There's little tension as the crew goes about trying to identify the mad bomber and stop him before it's too late. “Airport” manages to make a hole being blown in an airplane and people clinging to their oxygen masks look boring.

The film's unerring slowness is surprising not just because of the dramatic plot. George Seaton – whose career stretches back to “A Day at the Races” and “Miracle on 34th Street” – contributes some flashy direction. “Airport” frequently utilizes split screens, to illustrate phone calls and radio communication. Sometimes, there's even three or four boxes on screen, showing multiple events. Seaton also employs point-of-view shots, when the stewardesses are looking through the plane, and some quick cutting, when the bomb bursts the plane's fuselage. It's a good looking film, just a languidly paced one.

Melodrama and romantic subplots are pretty common on disaster movies. So it's not surprising that “Airport,” one of the prototypical examples, is filled with this stuff. One troubled marriage wasn't enough for this film. Burt Lancaster's Mel is never at home and his wife, played by “Invasion of the Body Snatcher's” Dana Wynters, is planning on leaving him. Luckily, he has a back-up love interest in the form of Jean Seberg's Tanya, the pretty customer relations woman he's practically already courting. Dean Martin's captain hasn't been so polite. He is cheating on his wife with Jacqueline Bisset's stewardess. Deano brings his typical swagger to the part, even if it's fairly inappropriate for the material. Lancaster simply goes through the motions.

The supporting cast proves more colorful. George Kennedy, who would become the main face of the “Airport” franchise as it went forward, is likable as the bombastic chief mechanic. Kennedy gets to bark orders at people and swear colorfully, which is something he's really good at. Helen Hayes would win her second Oscar for the crafty old lady who has made a habit of sneaking onto airplanes. If Hayes deserved to win the award that year, I don't know, but she is a lot of fun in the part. Maureen Stapleton would also be nominated for her role as the mad bomber's wife. Van Heflin, as said bomber, projects a nice nervous energy. 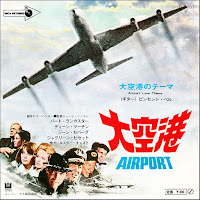 Despite its runaway (or should that be runway?) success, critics were not so unanimous on “Airport” in 1970. Both Pauline Kael and Roger Ebert gave it negative reviews, with Kael being especially scornful. Despite my misgivings about the film itself, the golden age of disaster movies wouldn't have happened without. This stodgy, dull, and sluggish thriller was responsibly for birthing most of the movies I'll be talking about this month. So I guess I should thank it for that much. [5/10]