By 1941, the Marx Brothers had been making movies for over ten years. While not all where huge hits, their schtick had proven successful. While I'm sure none of them knew at the time that some of these films would become classics, they were certainly aware of their popularity. As the forties began, their contracts with MGM came to an end. Maybe the crowds were getting smaller or the Brothers were just aware of the lessening quality of each films. Either way, the decision was made to make “The Big Store” their big farewell film. This didn't stick but, nevertheless, the film was sold as the last Marx Brothers movie. If that had been the case, the film would be even more disappointing.

As the titles indicates, “The Big Store” takes place around a huge in-door department store. The owner has recently passed away, willing ownership of the successful establish to Tommy, his nephew and a popular singer. He plans on selling his half, letting his aunt Martha decide what to do with the rest. A villain by the name of Grover conspires to kill Tommy and marry Martha, thus taking full control of the building. Suspecting something is up, Martha hires an unconventional detective named Wolf J. Flywheel. Flywheel brings Wacky and Ravelli, two wild friends of his, into the investigation as well.

I know complaining about the plot in a Marx Brothers movie is a futile and useless gesture but “The Big Store's” premise seems especially tossed together. It seems the main purpose of the film is to let the Marx Brothers rampage through a shopping mall. Surely there was an easier way to accomplish that then with a rather morbid gangster plot? The criminal elements, involving a conspiracy to commit murder and a detective (albeit flippantly) investigating things, stick out badly when compared to the wackiness around it. At times, it really does feel like two unrelated scripts, a comedy inside a department store and a crime picture, were stitched together randomly. It's not the smoothest combination.

In many of their MGM's films, the Marx Brothers' antics were considerably softened. You were unlikely to see the Brothers hassle random strangers to the degree they did in, say, “Duck Soup.” No lemonade stand owners were going to be tortured after 1933. We don't see anything of that level in “The Big Store.” However, at least the Brothers are fucking with the squares again. When Groucho is introduced to the villain, he immediately begins to push his buttons. Later, he handcuffs two guys he suspects of being bad guys. At least putting the guys at odds with a stiff-lipped villain reminds me of their earlier, better films. 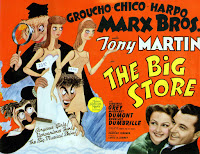 However, “The Big Store” seems more focused on music than comedy at times. Tony Martin, as Tommy, has two musical numbers of note. The first has him serenading his love interest over a piano. Later, he performs a big number in front of an audience, singing with a full orchestra. Yet even this is not the biggest musical number in the film. That occurs when Groucho leads a dance through the department store, encouraging the employees to “Sing While You Sell.” The number goes on and on, shifting through several genres, showing Groucho selling dresses and rugs. At one point, the song pauses so a woman next to a bassinet can sing. Her delivery is monotone, her expression is wide-eyed, and her body language is stiff. It's an odd moment during a number that's already too long and haltingly paced.

During my review of “Go West,” I noted how the big physical gags in the Marx Brothers' movies were getting increasingly sweaty. “The Big Store” is, by far, their most desperate movie yet. The visual comedy tends towards the excessively zany. One long bit is devoted to the various Murphy beds in the store. A full tent unfolds from the wall. Another, huge bunk bed rolls in and out of the floor. I'm not sure why the film finds this stuff so inherently amusing. As unfunny as that scene is, it's nothing compared to the big finale. The bad guys chase the Brothers around the store on roller skates. There's exaggerated gags, of Harpo leaping off lamps and in-between shelves. Wacky sound effects are layered over these sights. It's all painfully unfunny and shows a deep miscalculation of why people found the Marx Brothers funny in the first place.

Uncomfortable racial representations have cropped up in the Marx Brothers' movies from time to time. Such as exaggerated black dancers or unfortunate Indian stereotypes. “The Big Store,” I'm sad to say, features both of these things. A series of black performers sing a song about picking cotton. At one point, a Chinese family wanders into the store, accompanying by chopsticks playing on the soundtrack. Immediately afterwards, an Indian chief in a full headdress wanders into the scene. From a modern perspective, this stuff is deeply embarrassing. Even looking at the time period, it seems the writers were leaning on this stuff in hopes of generating easy laughs.

There aren't many laughs to be had in “The Big Store” but the ones that do exist mostly belong to Groucho. He gets a few good lines. A phone call mentions Trinidad, in an amusing twist. He name-drops Basil Rathbone in a funny way. An aside to a mannequin got me to chuckle. One of the funnier bits has Groucho breaking the fourth wall again, pointing how expensive Technicolor is. Most of Groucho's laughs come from him messing with other people, including Margaret Dumont, happily appearing again. He aces a job interview by admitting to be a shoplifter. Honestly, one of the funnier bits in the film is one of the smallest, when he casually tosses his hat at a lamp and misses. 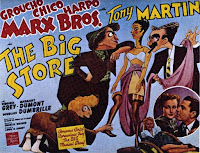 Harpo gets the most exaggerated gags, not all of which work very well. It seems wacky props have become a standard part of his schtick. He types on an overly loud typewriter while Dumont attempts to speak. It's a mildly funny gag that then goes too far when the reed flies across the room. Similarly, a bit about Harpo and Groucho hiding their breakfast inside a desk starts out funny. However, when the smoke starts to billow out, it's too much. Harpo's funniest bit has him messing with a female spy sent by cutting away the back of her dress when she doesn't notice. As you'd expect, Harpo also gets a lengthy harp playing sequence. This one is a fantasy scene where he imagines his reflection playing against him. It's an interesting attempt to spice up a require part of the movie but doesn't keep it from being rather dull.

As has become commonplace by now, Chico is the brother given the least amount of stuff to do. Once again, he's introduced as a helpful friend of the boring romantic lead, preventing him from getting funny for far too long. It's not until he meets his brothers that he get any laughs at all. And its usually little stuff. Like scratching Harpo's back like he's a dog. Or ducking his head down so Groucho can shake someone else's hand. Chico does get two notable bits. Such as when he encounters an Italian family, one of the few times Chico's fake nationality has been referenced in the movie. Or when he plays the piano alongside Harpo, an amusing attempt for the brothers to square off. Otherwise, Chico just doesn't get much to do.

“The Big Store” is the Marx Brothers in decline. They don't have the energy of their earlier movies. Now, instead of building a movie around the Brothers' style, the films are awkwardly forcing the Brothers into oddly constructed stories and comedic shenanigans. When it comes down to it, “The Big Store” just isn't that funny. There aren't very many laughs and many of the attempts to get big chuckles fall horribly flat. You can't blame the brothers for deciding to call it quits at this point. “The Big Store” is a gasping, wheezing comedy that is desperate for your approval but too tired and weak to earn it. [Grade: C]
Posted by Bonehead XL at 11:34 PM