History has a way of rewriting things. The narrative of a masterpiece being ignored in its time is irresistible to many people. But here are the facts. “Duck Soup” was released to slightly lower box office than the Marx Brothers' previous four films but it was not a flop. The reviews were positive but it was generally accepted that their earlier efforts were better. In time, especially once the Marxes' cult following grew in the sixties and seventies, “Duck Soup's” reputation would grow substantially It's generally considered the Brothers' best, most important film. Some even go so far as to call it one of the greatest comedies of all time.

Rufus T. Firefly has recently become the new leader of Freedonia, a small European country, at the insistence of rich old Mrs. Teasdale. Freedonia is a country in turmoil. Its finances are in ruin. The neighboring country of Sylvania is interested in annexing the country. Sylvanian ambassador Trentino attempts to move this mission along by sending two (largely uncooperative) spies, Pinky and Chicolini, to spy on Firefly. In-between their antics and Firefly’s disregard for traditional ethics, war between the two nations is soon brewing. 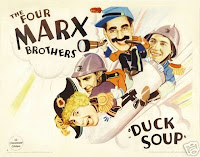 “Duck Soup” is, by far, the most enduring cult classic among the Brothers’ films. Earlier, I noted how the anti-authority attitudes present in “Animal Crackers” and “Monkey Business” surely appealed to hippies and punk kids in the sixties and seventies. “Duck Soup” pushes these ideas to the forefront. “Duck Soup” is, by far, the most anti-authoritarian Marx Brothers of them all. Groucho’s Rufus T. Firefly is a smart-ass who wiggles his way into a position of power and then uses it exclusively to mess with people. Harpo and Chico spend the entire movie irritating and sabotaging every stuffed shirt they encounter. The entire movie laughs in the face of anyone who takes them seriously at all.

If “Monkey Business” could be summed up as “The Marx Brothers on a Boat,” and “Horse Feathers” was “The Marx Brothers Go to College,” “Duck Soup” could be accurately be described as “The Marx Brothers Go to War.” That anti-war perspective is likely another reason why the film would become popular with counterculture types. “Duck Soup” depicts war as nothing but a clashing of masculine egos. In one brilliant scene, Rufus T. Firefly manages to talk himself out of peace talks simply but assuming that Trentino might insult him. Firefly goes to war essentially because another head-of-country called him an “up start.” In ‘Duck Soup,” war occurs because of petty men, scheming among themselves. The film plays all of this as farce but it’s easy to see its subversive ideology.

The musical numbers in the Marx Brothers movies are always a bit of a drag, interrupting the comedy and slowing things down.  In “Duck Soup,” however, they are actually used fairly well. There aren't very many, firstly. There’s really only two big numbers. “These Are the Laws of My Administration” introduces Rufus T. Firefly. The song is reasonably catchy and has Groucho cracking jokes throughout, keeping the audience amused. Near the end, there’s a big song-and-dance production called “The Country’s Going to War.” It’s a lively production, featuring people drumming on helmets and concluding with Harpo bringing down a chandelier. Music is almost a reoccurring joke of the film, as people have to rise and sing the Freedonia national anthem every time Mr. Firefly enters the room.

Grouch is, naturally, on fire throughout “Duck Soup.” The quibs start flying fast early, with a cute bit about playing cards. From there, he's goofing on Margaret Dumont, greatly missed after her two movie absence. As always, Dumont slips into the role of stocky woman that Groucho alternatively mocks and romances. Putting Groucho in a seat of government gives him ready access to serious-minded people he can fuck with. Such as the cabinet's concerns constantly being dismissed as “old business.” Or his sarcastic response to being called “Your excellence.” His indifference to politics are best summed up in small visual gags, such as when he eats crackers in bed or steals one person's doughnut and dunks it in another person's cup of coffee. 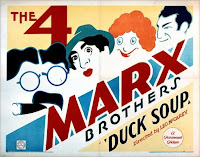 If Groucho is extra snarky in “Duck Soup,” then Harpo is extra rambunctious. There are long scenes devoted solely to him messing with a lemonade stand owner, pretty much for no particular reason. Harpo gets some of the movie's best running jokes. Such as his preoccupied with cutting off people's ties or coat tails. Or a gag with a motorcycle that builds to a fantastic conclusion. His ability to produce anything from his coat pockets – a record, a blowtorch – reaches its surreal crescendo when his tattoo springs to life in one scene. There's also very little harp playing, mostly isolated to a scene where Harpo pulls on some piano strings, which is not exactly a complaint.

Chico doesn't get quite the enormous laughs his brothers get but he's still certainly very funny in “Duck Soup.” As always, his mastery of puns and ability to spin conversations into circular absurdity is his strength. A long scene where he explains to Trentino where Firefly has been that week digresses into a conversation about baseball and married women. One of my favorite bits in “Duck Soup” has Chico being put on trial. There's asides about Texas, dollars, elephants, and people randomly objecting.

One joke in “Duck Soup” has grown so iconic that people often forget it more-or-less originated here. (At least cinematically, as I imagine there was likely a vaudeville predecessor.) I'm talking about the legendary mirror gag. Proceeded by a long scene where Groucho and his brothers pretend to be each other, the scene involves Harpo pretending to be a mirror reflection of Groucho. There's zero music and no sound in this scene, the joke playing out strictly as a piece of visual comedy. The gag grows more and more absurd, the brothers eventually not even noticing they are carrying different hats or walking around each other. It's such a beautifully choreographed piece of comedy that there's no surprise it would be imitated in countless cartoons and television episodes.

As “Duck Soup” crashes towards its conclusion, it only gets wilder. In its last act, the film truly becomes the brothers' irrelevant take on military history. The Paul Revere legend is bagged, with Groucho mocking the number of lambs in windows and Harpo abandoning his proud ride to chase after women. (And then he wakes up in bed with a horse, a joke so dirty I'm not sure how they got away with it.) Dumont's singing is mocked, Groucho shoots at his own men, and the day is saved with a food fight. As if the film's complete disregard for the very concept of war wasn't clear enough, it freely mashes together different historical elements. World War I's trenches exists alongside Civil War and Revolutionary era uniforms and weaponry.

Reading too much into the deliberate silliness of the Marx Brothers is probably a bridge too far. Yet it's clear to me that “Duck Soup” has survived as their most iconic and beloved film precisely because its absurdity actually contains a degree of satire. The boys came of age during the first World War and the second one would soon begin. So it's fair to say they had some insight on the trivial reasons behind cataclysmic conflict. Even if you take all of that away, “Duck Soup” stands proud as a hilarious and inventive comedy, packed from beginning to end with riotous laughs. [Grade: A]