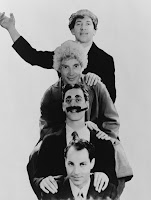 When you think about it, it's pretty interesting that the Marx Brothers are still as beloved and famous as they are. Compare them to other comedy teams who saw their popularity peak in the thirties and forties, most of whom have totally disappeared into obscurity, it's interesting that anybody even as fucking old as me knows who Groucho, Harpo, and Chico are. I guess that speaks to the influence and evergreen appeal of their films and screen personas. I got into the Marxes in college and have been wanting to do a retrospective for quite some time. As always, I quickly discovered that comedy is really hard to write about. So let's see how badly I fuck this up.

The Marx Brothers first brought their beloved vaudeville show to cinema screens in 1921, with a film called “Humor Risk.” However, the brothers' hyper-verbal brand of comedy did not translate well to silent film. Marxian legend has it that Groucho was so dissatisfied with the results that he burned the only known copy, casting “Humor Risk” into the shadowy world of lost films. With the advent of sound, the Brothers would try again in 1929. The film would adapt their hit 1925 Broadway show. It would become a huge hit for Paramount, launching the Marx Brothers' legendary careers as cinematic comedy pioneers. Nearly ninety years later, how does the film hold up?

“The Cocoanuts” is set during the Florida housing boom of the 1920s, when swampland was being converted into homes and developments. The action takes place at the Hotel de Cocoanut, a struggling resort hotel run by a Mr. Hammer. There's quite a bit of intrigue happening in and around the hotel. Two vagabonds roll in, hoping to swindle the rich guests out of their valuables. There's a love triangle, involving a young woman in love with a poor boy and the rich man her mother prefers her to marry. There's a theft, of a priceless necklace, and an undercover police detective snooping around. Mostly, it's all set dressing for comedic banter and goofy sight gags. 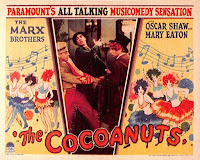 As someone who associates the twenties primarily with silent films, I was surprised to see “The Cocoanuts” was a sound picture. It is, without a doubt, a very early sound movie. Outside of the musical numbers, there's no score, leading many of the scenes an oddly quiet, sterile feeling. Adding to this is rather stiff direction, which frequently just places the characters in front of the camera and let them talk. This is partially due to then technology, where cameras where stuck inside sound-proof booths and unable to move. I also suspect that “The Cocoanuts'” stationary direction has something to do with the story's stage-bound origins. The technology finally existed to capture the brothers' antics on-screen but film still had a lot of catching up to do when it came to capturing the act's energy.

Though, if you were just going to sit back and watch a performer do their thing, you could do a lot worst than Groucho Marx. Groucho does seem to have slowed down his famous quick wit slightly in “The Cocoanuts,” perhaps for the benefit of the filmmakers, which he didn't get along with. However, the most famous Marx brother is still in tip-top, hilarious shape here. Groucho rarely misses a chance to spin off into ridiculous digressions. This is best on display when he's mockingly bragging to his employees about the availability of land in Florida. His lightning fast quips make small scenes –  talking about Abraham Lincoln – into huge laughers. Even when captured by stiff cameras, Groucho's jokes still came fast and furious.

Harpo Marx's interest into “The Cocoanuts,” credited as a character named Silent Sam, immediately confirms him as one of the damnedest characters in classic comedy. We all know the trademarks by now: The honking, providing by a cane-like horn. The frizzy hair, wacky stare, and top hat. Yet that undersells the pure anarchy Harpo brings into his scenes. Within minutes of entering, he's grabbing legs or placing his own leg into folks' hands. Quickly, he's picking fights with Chico's Willie the Wop and other characters. At least once, these fights quickly segue into an impromptu dance. He leaping onto a desk and ripping up envelopes. Or pounding a desk bell, summoning bellhop after bellhop. From the beginning, Harpo Marx brought a unique presence to the screen.

While Groucho's bullet-fast quips and Harpo's oddball physical gags dominate the screen, you can't overlook Chico Marx's contribution to the team. The third brother's purpose was primarily to bounce off and baffles Groucho and others. This is most apparent in the viaduct/”why-a-duck” sequences which just keep spiraling around and around, becoming more absurd and hilarious. A similar technique is employed in a scene where Chico has been paid to bid at an auction, which he is a little too insistent on. This dynamic, played off on stage a hundred times, was already a well-oiled machine in 1929. Right out of the gates, the brothers couldn't be caught. 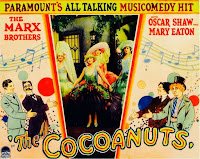 “The Cocoanuts” would also introduce Margaret Dumont, the “female Marx Brother.” In their first cinematic offering together, Dumont quickly establishes herself as the perfect straight woman to Groucho's antics. Their relationship zigzags between contempt and crude flirtation. Such as when Groucho mocks the woman, who is equally dismissive of his shenanigans. Later, he circles her waist with his arms, dragging himself around her. This absurd back-and-forth carries through some of the film's slower moments, as the two have a highly amusing chemistry. No wonder the Brothers would invite Dumont back for many of their future films.

The plot in a Marx Brothers' movie is always a secondary, practically disposable element. In “The Cocoanuts,” it's especially irrelevant. There are at least two completely unimportant subplots, which tie together. A love triangle involves Dumont's daughter wanting to marry one man, a poor hotel clerk, while her mother hopes she's romanced by the rich architect instead. This dovetails with a involving a stolen diamond necklace and a map. The scenes devoted to this stuff drag the down immensely. Any time the Marxes are off-screen, and the focus shifts to the love story, “The Cocoanuts” is taken over by a sleepy, painfully slow paced atmosphere.

The same can be said of the musical numbers. The songs are carried over from the stage play. Mixing comedy, romance, and music were standard practice in vaudeville. However, the balance is seriously off on-screen. The songs are all stiffly presented, few of the dance numbers coming to life in a convincing manner. As with everything else, directors Robert Florey and Joseph Santley just sit back and watch the dancers from a distance. None of the songs are especially memorable, with the romantic themes bringing the already halting pace to a complete halt. In fact, a few are genuinely quite bad. Such as “Monkey Doodle Doo,” which features some painfully bad lyrics. Harpo's harp playing and Chico's piano work have much the same affect, both sapping the film of its rocketing comedic energy.

Despite some serious flaws, “The Cocoanuts” still features at least one classic comedy bit. Harpo sneaks into the bedroom of the thieving femme fatale. As she had also invited several other men to meet her, this leads to the three Brothers slamming the doors, moving in and out of the two rooms. In another likely carry-over from the stage show, the scene is shot with the dividing wall in the middle. However, it's a fast piece bit of visual comedy, one that would influence a number of lesser films and seemingly every Hanna-Barbara cartoon from the seventies.

However, there are definitely a few gags that are clunkers. The auction sequence begins fantastically. Unlike Groucho and Chico's other bits, this one quickly becomes a bit tedious, going on for much too long. A later scene attempts to combine music and comedy. The investigating detective sings about loosing his shirt to the famous refrain from “Carmen.” Despite the best efforts of the Brothers, it's simply not a very joke and one the film stretches out for far too long. Luckily, by that point, “The Cocoanuts” is quickly nearing its end.

As a debut for the Marx Brother's frenetic comedic style, “The Cocoanuts” is a bit on the awkward side. The early sound presentation really saps a lot of energy from the proceedings. However, there's still plenty of insanely funny moments and gags throughout, providing by the Marxes operating at peak performance. Like “Humor Risk,” Groucho wasn't a big fan of the film either. He wanted to buy the film rights back and prevent its release. Clearer heads prevailed, the film becoming a huge finical success and launching one of the greatest comedy legacies of classic Hollywood. As a stand alone movie, “The Cocoanuts” is troubled but pretty good. As a starting point, it's quite a feat. [Grade: B]
Posted by Bonehead XL at 11:41 PM