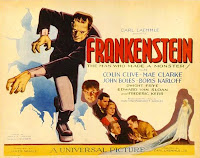 Frankenstein (1931)
The earliest scenes of “Frankenstein” are haunted by the spectres of death. The opening burial, taken place in a barren, stark graveyard, is watched over by a gruesome grim reaper statue. Colin Clive’s Henry Frankenstein literally throws dirt in Death’s face in this scene. Another early moment featuring Edward Von Sloan’s Dr. Waldman is framed by shelves full of skulls. Fritz’ robbery of the brain, his shadow cast huge on the wall, is foiled by a hanging library skeleton. The morbidity of the subject matter extends to the very structure of the film.

I can’t believe I never noticed the deeply expressionistic sets in this movie before. The pattern on the floor of Frankenstein’s laboratory are criss-crossed at conflicting angle, putting the viewer off. The beams and walls in the tower are at askew angles, subtly evoking an otherworldly atmosphere. The Monster’s prison are the sets most obviously indebted to “Caligari” and its ilk. The sole window appears in the center of a slouching triangle while the door is tightly squeezed between two encroaching walls. Even the hallways of the ancestral Frankenstein home are slightly in the same style. The film’s extensive use of shadows and lightening seals it. “Frankenstein” is the extreme surreal stylings of 1920s German cinema streamlined for an American audience.

Colin Clive’s performance as the Doctor is sort of underrated. His more manic moments are the most famous but his quieter scenes work well too. In Mary Shelley’s novel, the quest to recreate life is born out of a desire to conquer the death in his own life. In a monologue, Clive’s Doctor reveals that his experiments steam from what he sees as a natural progression of man’s curiosity and science. Even his softer scenes with Elizabeth have a warmness to them. Dwight Fry ultimately isn’t given too much to do, due to Fritz’ monosyllabic nature, but his body language still sells the character. In the final version of the film, the character of Victor doesn’t serve much of a purpose. Originally there to be beside Elizabeth after Henry’s demise, the revised, happier ending ultimately leaves the love triangle unresolved. It’s a bit of a shame since John Boles makes the usually aggravating third wheel of the obligatory love triangle actually a pretty nice guy.

The nature of Karloff’s monster has been discussed endlessly. Listening to Ruby Belhmer’s informative, if overly studious commentary, it’s not surprising to learn that the “criminal brain” aspect of the script was a late addition. It seems to me that James Whale’s intention was that the Creature was a pure innocent, totally child-like in nature. His reaction to Maria the flower girl’s drowning is one of abject horror. He is not born a monster, but rather transformed into one by the cruelty and rejection of the world. His only truly malicious move is the murder of Dr. Waldman. Even the attempted abduction of Elizabeth could be explained away by a naive curiosity. In the original script, the doctor’s laboratory was also the climatic windmill. In light of this, the Monster dragging Henry’s limp body back there becomes a frightened, confused creature returning to the only home he’s ever known with the only person to show him anything but cruelty in hand. The film is even more a tragedy then ever before.

James Whale seems fond of sideway sliding dolly shots. He uses them numerous times, passing through the set’s walls as if they were a stage play. Undoubtedly, the most memorable of these types of shot is Maria’s father carrying her body through the village. Behind him, the celebrating faces of the villagers transform into frozen faces of terror, their songs dissolving into horrified screams. Though the sequel would make it obvious, “Frankenstein” does contain some of Whale’s trademark camp humor. The elder Baron Frankenstein, fed up and disgusted with his son’s antics, is the film’s primarily comic relief and far more subtle then the era’s usual style. The film certainly never suffers from the pacing problems “Dracula” has.

Long time readers should know how much this film means to me. I could ramble on for pages. Instead, I’ll cut it off here. “Frankenstein” is a great, great movie. If you haven’t seen it, you’ve got no damn excuse. [9/10]

Fascination (1979)
Highly regarded by hardcore Rollin fans, “Fascination” is a break from the arty vampire flicks he’s best known for… Sort of. The director actually seems more interested in telling the story then nudity and pretty images. It’s by far the most polished of his films I’ve seen.

Which isn’t to say it doesn’t feature his trademarks. In the late 1800s, a thief swipes some coins from his fellow thieves. Despite the female tempting him with her heaving bosoms, he continues into the forest with his loot, the others in pursuit. Eventually, he comes to an isolated lake-surrounded château, home to two mysterious women. The girls immediately manipulate the guy, doing everything they can to keep him there until midnight. The girls, lesbian lovers and master seducers, keep whispering about a mysterious ritual. What does this have to do with the opening scene of a woman drinking ox blood for her anemia?

The horror elements slowly work their way in. The most famous scene involves Lahaie, clothed in a black robe, swinging a giant scythe, an eroticized version of the Grim Reaper. Murder shows up more then once, bloodily slashing through the subplot. Once night falls and black fog rolls over the lake, a cult of women appear and the movie turns out to be a vampire story after all, of sorts. So if boobs are distracting and you’re wondering when the horror will show up, be patient.

A woman in white standing in butcher’s shop, the walls and floors covered with blood, is the first striking image. Eva writhes on the bridge in a see-through pink dress. Faces, half-bathed in shadow, peer around a wooden plank. So, no skimping on the visuals. What there isn’t any of is funny camp or over-the-top pretentions. That’s good and fine and probably makes the movie highly accessible, but it also makes it a little less fun. Mai and Lahaie both give good performances and Rollin keeps his embarrassing tendencies under wrap. I can certainly recommend “Fascination.” But I actually think I like the director’s work better when he’s trippier and goofier. We’ll see how that opinion evolves as I continue my journey. [7/10]

High School of the Dead: “Democracy Under the Dead”
This episode starts with a short news broadcast. There’s some (possible) jabs at world politics, what with America’s willingness to just nuke everything and call it a (dooms)day. After that, the episode launches into melodramatic action. Realism left five minutes ago as our group of normal teens quickly establish themselves as the Zombie Extermination Squad, finishing whole hordes of undead in seconds, throwing bodies around like paper bags. Zombies weigh less, I guess.

The cast continue to be problematic. Annoying Smart Girl grabs herself a pair of glasses so you know she’s the smart one. Despite that, her interaction with Fat Nerd continues to be amusing. Nurse Boobs (They even call her Nurse Boobs!) is starting to grow on me. Maybe that’s because this episode gives her something to do besides have giant mammaries. Really, it’s Boring Hero Guy and Boring Hero Girl that bother me. Guy’s only defining characteristic is his willingness to endanger his own life in order to save his friends, which he does twice, while Girl continues to be a grab bag of emotional upheaval. In this episode, she’s pissed off and distrustful, causing the most groan-inducing horror cliché: In-fighting in the group. Worse yet, this episode introduces a school teacher who is obviously evil from the first second. He hisses every line, moves his arms around dramatically, kicks a kid’s face in, demands to be elected leader, and is the hoariest of villain clichés: A Social Darwinist. Ugh. Hopefully, zombies tear this guy apart really soon.

There continues to be enough dynamic moments to keep me watching. The zombies of “High School of the Dead” are blind and hunt solely by sound. This leads to a suspenseful sequence of a character navigating a crowd of zombies just by keeping his mouth shut. The latter half features two actually exciting action scenes, one involving a bus full of ghouls, another featuring a zombie with a motorcycle helmet on. It doesn’t make much sense. (Did he zombify mid-bike ride?) But at least it’s different. The fan-service is a little less oppressive in this episode. Aside from the panty shot on a zombie girl. That might be a new low. [5.5/10]
Posted by Bonehead XL at 8:59 PM