Dracula (1931)
I’ve probably written about these films more then any other yet I notice something new every time I watch. This time, I realized “Dracula” is set in the modern day. During the flower girl scene, you hear a car horn and see modern street lamps. Another question I ask for the first time: Why did Dracula disguise himself as the carriage driver? Why hide his face? Despite this question, it is one of the most atmospheric scenes in a film built primarily on atmosphere.

Modern critiques tend to say Lugosi is the sole graceful factor in a stagy film. True but don’t undersell. Karl Freund’s camera is not stationary. A pan around Renfield’s shoulder, a slow move up steps, a panorama of Seward’s sanatorium. Renfield leering from the ship or the shadow of the captain lashed to the wheel are just two chilling scenes. The use of shadows is toned down from Universal’s silents and it’s generally agreed that Freund’s artistry was held back by Todd Browning. Wither Browning had trouble adapting to sound or was still grieving for Lon Chaney (and the version of “Dracula” they had planned on making) is debated. Either way, you can’t deny the power of these scenes. The early shots of Dracula’s castle, the brides awaking in the catacombs, the illogical armadillos, beetles in tiny coffins, Lugosi’s glaring eyes. These images are the base upon which all American horror films were built. They still send chills up a viewer’s spine seventy years later. The set design is incredible, particularly the dusty staircase of Castle Dracula or the ruins of Carfax Abbey. Supporting the sets are fantastic glass painted backgrounds.

I won’t waste words on why Lugosi is the iconic Dracula. He exudes an authority over everyone simply with his body language. Shots of him doing nothing but standing in shadow-swept doorways manage to be creepy. Given Dracula’s sway over the opposite sex, it’s easy to understand while the vampire is a fantasized character for men. But why is the vampire a sex symbol for women? The film is split on the issue. The scene of Dracula cornering the flower girl brings to mind nothing but sexual assault. I believe Dracula leaning over the sleeping bodies of his prey aren’t meant to be provocative but rather to invoke classical nightmare imagery. We are all vulnerable when we sleep and many horror films prey on that innate vulnerably. (Yep, I just traced a line from Dracula to Freddy.) Dracula is feared by his female victims, yet still oddly attractive. Lucy doesn’t seem totally asleep when Dracula comes for her. A later scene, where Mina walks into the count’s arms, his cape wrapped around her, blending in with the shadows, is undoubtedly romantic. The vampire is a man with complete control over his females, psychic and sexual. Why women would desire such a mate is a topic unsuited for this blog. The seductive female vampire is a horror concept not yet solidified. Mina, once turned, seems less like a willing seductress and more like a drug addict, uncontrollably forced to attack her beloved husband.

The movie is flawed, no doubt. Who the heck is the main character? The count is unknowable. Harker or Seward don’t do anything besides wring their hands. Van Helsing comes in too late, Lucy exits too early, while Mina is a damsel in distress. Nope, it’s gotta’ be Renfield. We follow him from the beginning and he features in most of the scenes. A book must exists that explores his character more. There’s a lot of untapped potential there. Dwight Fry had enough range to play a straight-laced businessman perfectly, even if his unhinged insanity is what we remember. When his spider is thrown away, you almost feel for the guy. His monologue about Dracula presenting him with a feast of rats is great and I wonder why no other adaptation has gone into more detail about that. Why does Dracula even keep the guy around? He doesn’t serve him much and is even responsible for revealing the count’s hiding place.

The pacing drags in the latter half, as the staged qualities take over. There’s a number of narrative question marks. Lucy’s story arc is oddly abbreviated. We hear about her escapades as the Woman in White but Van Helsing disposes of her off-screen. Why does Dracula have Mina just hanging around the abbey at the very end? What purpose did that serve? Renfield preys on the unconscious maid in one scene but we never find out why. The guy sure gets out of his cell easy. Dr. Seward should probably hire a new staff. Dracula’s final confrontation with Van Helsing is anticlimactic. Even the weaker second half of the film has its moments, such as Dracula making eye-contact with Mina’s maid or smashing the mirror out of Van Helsing’s hand.

I’m not begrudgingly calling it a great movie. It remains the best adaptation of Stoker’s novel in many ways and is the most important of the Universal Monster cycle in countless ways. [8/10] 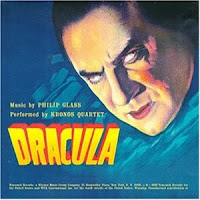 Dracula (with Philip Glass score)
Not to linger too much on this, since it is the same film, but I don’t think too many people will argue with me when I say Philip Glass’ score improves the film. It adds tension to numerous scenes, such as when Dracula attempts to bring Van Helsing under his sway. The music certainly helps some of the slower moments of the movie pass quicker. While Glass’ signature minilistic, repetitive style certainly isn’t for everyone, his film scores are usually outstanding. This one is no different. I suspect if the music was with the film from the very beginning, it would be even more critically beloved. [8/10]

Drácula (1931) – The Spanish Version
Common knowledge would have it that this is the superior version. Well, for films shot with the same script, these two are rather different. Spanish Dracula is generally better paced, despite being nearly a half an hour longer, with a few scenes cut together. The camera is more active, overall, though not by much. A lot of the dangling story threads in the English version are resolved. We find out just what the heck Renfield was doing to that unconscious maid. (Just freaking her out, apparently.) The Lucy subplot is actually resolved, with a simple scene of a sad Harker and Van Helsing leaving a tomb. We find out why Dracula left Mina just hanging around the abbey at the end. (He was going to finish the job but the raising sun forced him into his coffin.) The additional scene of Van Helsing giving the dead Renfield his final rites is poignant. There’s a new, nice scene of Renfield being interviewed where he reverts to a normal, calm disposition before overcome by the presence of a fly. Lupita Tovar is an improvement over Helen Chandler. Tovar’s Eva is much more energetic and, once under the count’s sway, actually acts like a seductive, evil lady vampire. Van Helsing even has to ward her off with a cross!

These are all pluses but this take lacks some important details. Carlos Villarias has nothing on Bela Lugosi. Instead of Lugosi’s natural, sinister charisma and commanding presence, Villarias mugs for the camera, doing a lot of eyebrow and face acting. Pablo Rubio goes way over the top as Renfield, screaming hysterical laughter, acting like a total nut and not in a good way. Seward’s staff seems even more incompetent here. With the exception of a few shots, this version seriously lacks the atmosphere of Browning’s film. A shot of fog billowing through an iron gate is the sole moment of foggy, black-and-white ambiance. So it’s about an even split. From a technical perspective, this is the stronger film, but it lacks the ingredients that made the English language film special. [7/10]

Viy (1967)
The first Soviet Russian horror film. The only reason censors allowed it is because it’s based off of a short story by respected author Gogol. (Who based it on a folk tale he totally made up.) The period setting probably didn’t hurt any either. I’m not a scholar of Soviet film but it’s not surprising to see that this is more like European art cinema instead of anything like what American studios were producing at the time.

“Viy” takes place in the 1800s and revolves around a young pastor in training. One of the surprising things is how rowdy parish school is. Despite training to become men of the cloth, the students still drink and party. It’s those desires that get our protagonist in trouble. Khoma Brutus (Leonid Kuravlyov) seeks shelter in an old woman’s barn. She hits on Khoma and when he rejects her, the old woman jumps on his back and rides him across the night sky. This is the first use of old-fashioned but charmingly surreal special effects. Kuravlyov ends up beating the witch to death. Before dying, she transforms into a beautiful girl. The next day, the student is summoned to reside over a young woman’s body for three nights. It, of course, is the girl he met previously. While watching her corpse, weird shit happend. And that’s when the movie gets good.

Brutus is warned by the townsfolk that the girl was a witch. Her father’s insistence that he stays and fulfills his daughter’s last request is oddly adamant. There’s nothing wrong with these daylight scenes. The director shoots with a lot of vigor. Kuravlyov is easy to like. An early scene of the student getting drunk employs the wonky in-camera effects that you’ll see more of later.

The night scenes are when the movie comes alive. Khoma is smart enough to drawl a circle of protection as soon as he’s locked in with the dead body. The first night the body gets up and attempts to seduce him out of the circle. The second night, the coffin rises into the air and flies around. None of that compares to the last act, when the witch gets serious. In the film’s signature moment, green skinned monsters of all type crawled out of the walls. Skeletons ghoulishly dance around. (You can clearly see the wires and yet, somehow, that just adds to the effect.) The odd phantoms, with three pig noses or eyes were eyes shouldn’t be, exist in their own gravity, moving according to their own rules. The monsters surround the circle, determined to freak our hero out. It’s not until the title monster, a huge demon with giant eyelids covering his all-seeing eyes, is summoned that stuff goes badly for the protagonist.

The rest was just build-up to this fantastic overload of phantasmagoric images. Rightfully, the movie peaks here. Good triumphs, kind of, and the movie wraps up on a decidedly ambiguous note. How you feel about the character’s fate is squarely up to the audience, even if the filmmaker’s meant this to be a fable about faith. “Viy” feels like a fairy tale from another time, full of culture-specific creatures with specific rules. For someone who likes crazy looking, do-it-yourself special effects and weird, obscure folklore, this is exactly the kind of movie I like. It’s an easy recommend for horror fans willing to venture out of their comfort zone. [8/10]
Posted by Bonehead XL at 4:34 PM

Someday, when computers are powerful enough, we'll take Bela and Dwight out of their movie and plop them into the Spanish version, thus frankensteining the perfect Dracula film.