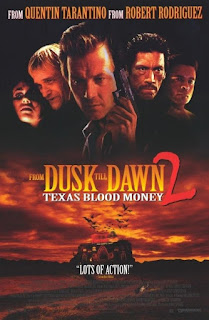 The Weinstein Brothers started Dimension Films, a subdivision of Miramax, to release low budget genre movies. It must’ve become apparent quickly that the direct-to-video market was especially hungry for entertainment of this type. Quite a bit of Dimension’s output was straight-to-video sequels to popular and semi-popular theatrical horror movies. This is how the “Children of the Corn” and “Hellraiser” series became much too long. I imagine a movie about vampire strippers was popular among video store deviants, so “From Dusk Till Dawn” soon received DTV sequels of its own. The first of which, “From Dusk Till Dawn 2: Texas Blood Money,” arrived in 1999. Scott Spiegel, Sam Raimi's old partner and the director of "Intruder," would take Robert Rodriguez' place behind the camera.

Aside from its "criminals and vampires" premise, "Texas Blood Money" doesn't have too many connections to the first "From Dusk Till Dawn." The Titty Twister, looking entirely different and much cheaper, puts in a brief appearance. So does Danny Trejo, playing Razor Charlie's identical brother. Michael Parks' actual son, James, appears as the son of his character from the first film. Other than that, "Texas Blood Money" is a fairly loose sequel. It involves an on-the-run crook, Luther, recruiting a group of friends for a huge bank job in Mexico. Sensible Buck, grizzled C.W., tough Jesus, and childish Ray Bob gather in a shitty motel to await his arrival. On the way there, Luther is bitten by a vampire. He soon spreads the condition to everyone in the gang, save for Buck. Once at the bank, the bloodsuckers reveal themselves, causing Buck to form an alliance with the cops surrounding them.

Here’s a fun drinking game you can play with “From Dusk Till Dawn 2:” Every time there’s a P.O.V. shot, take a drink. You’ll get intoxicated very quickly. Spiegel delights in adopting the point of views of various things: Vampire bats, the bottom of a cooler, the bottom of a dog’s water dish, a man doing push-ups, a man having sex, an oscillating fan, a motel key rack, shotguns, puddles of blood, car hoods, a skull, and a vampire’s mouth, an especially goofy trick the movie repeats several times. Aside from this sometimes aggravating, sometimes hilarious quirk, Spiegal devotes himself to aping the styles of his influences. In deference to Tarantino, he sprinkles the soundtrack with surf-rock and gives the criminals prosaic dialogue about pornography and country songs. Spiegal attempts to replicate Rodriguez' frenzied editing and shooting. In execution, he just ends up throwing in a lot of hard-to-follow shaky-cam and some embarrassing slow-mo. You can also see Spiegal aping his old buddy Sam Raimi. He pay homage to "Evil Dead" with Bruce Campbell's opening cameo and the shots of the dead vampires decomposing. He attempts to grab that same atmosphere of wild horror but can't quite hack it.

In fact, "From Dusk Till Dawn 2" leaves a lot to be desired as a horror movie. Spiegal seems preoccupied with CGI bat attacks, as there's about five of them in the movie. An attack in a shower is especially ludicrous. Many of the attack scenes, such as one in a driving truck, come off as hopelessly silly. The vampires simply aren't as cool looking this time, amounting to some fangs and contact lens. The script also relies way too much on vampires being repelled by crosses and crucifixes. There's about two solid moments, a shot of the vampire's shadows cast on a wall and a moment where the creatures leap out from clouds of tear gas. "Texas Blood Money" does not have the original's effortless balance of horror, action, and comedy either. As an action movie, the sequel is ridiculously over-the-top. There are multiple sequences of people being thrown through the air, a hammy trick that is repeatedly relentlessly. As for the comedy, that's a little better. If only because a cardboard standee standing alongside the vamps or the sudden appearance of a solar eclipse are so dumb and silly, they made me laugh.

While the sequel's cast could never hope to top the original's, it is pretty solid for a direct-to-video flick. Robert Patrick stars as Buck. Patrick is believable as a rogue and crook who still has a sense of honor. If nothing else, his growing sense of disbelief at the craziness occurring around him is fun to watch. Bo Hopkins is solid as the officer, who goes from hating Patrick to respecting for him. Muse Watson is mildly amusing as C.W., clearly enjoying the vulgar dialogue he's given. Raymond Cruz and Duane Whitaker are fairly over-the-top as Jesus and Luther. Still, when focused on its men-on-a-mission backbone, "Texas Blood Money" is probably at its best.

Ultimately, "From Dusk Till Dawn" comes close to working at times. While not a satisfying sequel at all, there's some decent ideas here. As misguided as his attempts may be, Spiegel's direction definitely goes for it, at the very least. The cast is solid. However, "Texas Blood Money" ends up feeling exactly like the cheap, cash-in sequel that it is. It's silly when it should be scary, is frustratingly small in scale, and somehow feels too long despite only running 79 minutes before credits. [5/10]