14. Shorts
The Adventures of the Wishing Rock

You might think that his hyper-violent genre films are his bread-and-butter but Rodriguez clearly enjoys making kids movies. Even after the widely assumed end of the highly profitable “Spy Kids” series, he kept returning to the kiddie genre. “Shorts,” a co-production with an Abu Dhabi-based studio, was released in 2009 to little fanfare. After the highly questionable quality of “Spy Kids 3” and “The Adventures of Sharkboy and Lavagirl,” I cynically dismissed it at the time as another shitty kids’ film Rodriguez made to placate his own children. Perhaps these low expectations helped, as I ended up liking “Shorts” much more than expected.

In the small town of Black Falls, Texas, everyone works for Black Box Unlimited, a corporation that produces the Black Box, a gadget that can turn into almost anything. Like the parents of Toby “Toe” Thompson. Toe is a loner with no friends, that's bullied by the children of Carbon Black, the owner of the company. Toe’s life changes when he stumbles upon a rainbow colored rock. The Wishing Rock has the power to grant any wishes. This discovery sets off a chain of events that will invite aliens, a pterodactyl, a giant booger monster, upright crocodiles, giant bugs, a telepathic baby, a huge robot, and utter chaos into town.

Here’s a loaded statement I didn’t expect to make: “Shorts” is kind of like “Pulp Fiction” for kids. As the title indicates, “Shorts” is comprised of various episodes. Though initially they stand alone, they slowly come together for a big finale. As in Tarantino’s crime land masterpiece, these stories are not presented in chronological order. Episode two comes before episode one, for example. Considering the two are buddies, it’s unlikely Rodriguez wasn’t intentionally aping the more famous films. What is likely, I think, is that the director sought to introduce children to the omnibus format and non-linear storytelling. Which is definitely a worthy cause.

The film even begins before the Warner Bros. logo fades on-screen. We start with an “Episode 0,” subtitled “The Blinkers.” It involves a brother and sister having a very fierce staring contest, never blinking and holding each others' attention in the rain, during school and even through bed time. It starts the movie off with a likably zany atmosphere, an element of the absurd that is nevertheless rooted in real life. How this segment concludes gave me a hearty laugh. “The Blinkers” easily could've stood alone as singular short film, showing Rodriguez perhaps longing for his “Bedhead” days.

However, “Shorts” does eventually become a little too manic. The second segment, which happens first in the film’s timeline, relies a little too much on kids running and screaming from CGI critters. These mature eyes of mine got a little exhausted watching three siblings, one of which is played by Rebel Rodriguez, bickering about what to do with the craziness they’ve summoned. I felt similarly during episode three, where the Wishing Stone unintentionally unleashes chaos at a Black Box work party. When people are yelling at each other, fighting with one another, bodies shifting in shape and dimension, you start to feel that this story is pitched exclusively at hyperactive kids.

And, yes, “Shorts” has its share of gross-out, “squishy” humor. Near the end of Episode One, a giant burst of pterodactyl poop splashes on-screen, covering a character. Someone eats food with their toes and another gets splattered with mud. Episode Four – the third chronologically – is all about a giant booger monster rampaging through a home. There are other jokes present as well, mostly playing on the germophobic nature of the family. There’s even some pretty cool practical creature effects, when the booger monster first begins to form. (It’s soon replaced by a CGI creation.) Yet the primary joke in this scene is still that big globs of green snot are funny.

There are gags that are pretty good too. When the rowdy group of boys in Episode One wish for one of them to become super smart, their infant sister is made telepathic. Rodriguez’ ex-wife, Elizabeth Avellan, provides the baby’s psychic voice, in a dry and wise-sounding fashion. This is a solid gag and well-deployed. When Helvetica receives the Wishing Rock, her rise in power is paired with her name being chanted on the soundtrack, an inspired bit of absurdity. A running joke has Toe’s older sister accidentally making her off-screen boyfriend giant sized. When he appears in the last act, his manner is surprisingly nonchalant. There’s also an inspired bit of absurdity, when Toe’s friend Loogie attempts to woo Toe’s older and disinterested sister. All this stuff is pretty funny, a sort of quick goofiness that represents “Shorts” at its best.

The first proper episode, which is actually the second chronologically, walks the line between fun and too shrill the best. It’s zany and high-energy with an entertainingly Loony Tunes-like tone, which is supported by the title cards that show the characters’ heads floating in front of a colorful background. There’s a good gag involving Toe and Helvetica fighting in the school, a series of far-fetched incidents escalating until both tumble out a window. The little aliens have cute designs and get up to some appropriately whimsical adventures. Rodriguez’ direction is energetic, including fun P.O.V. shots of Toe getting tossed into a garbage can or the inside of his mouth as the aliens cleaning his braces.

As has become customary by now, Robert Rodriguez makes sure to include some sort of moral or object lesson in each episode. Unfortunately, as has also become a habit with his kids’ movies, these lessons are hammered hard enough to make sure even the youngest kid will catch it. Episode two, Toe’s story with the aliens, provides a moral about appreciating the people around you. Episode three, the costume party descending into chaos, is about his parents learning to put their relationship and family above work. Episode one, about the Laser siblings discovering the Wishing Rock, can be summed up as “be careful what you wish for,” which largely applies to the whole movie as well. “Shorts,” as a whole, is attempting to teach kids that great power should be wielded with only the utmost care. Even if the movie overdoes it, these are all good things to teach kids. Except, as in “Sharkboy and Lavagirl,” Rodriguez once again suggests that kids should try and befriend their bullies. It even throws in that old chestnut about the bully – Helvetica, in this case – being in love with their target, suggesting the two will have a romance some day. Please, do not teach your kids this. 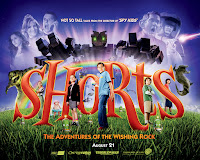 The director does break one of his bad habits, at least as it relates to his children’s films. “Shorts” features lots of CGI mayhem. This is a movie, after all, that concludes with a giant robot fighting a giant wasp, a giant dungbeetle also appearing near-by. There’s a booger monster and a grown man being changed into a hot dog. The CGI does look a little better than his last few features, it must be said. Mostly though, I’m thankful “Shorts” wasn’t shot entirely on a green screen. Just being able to see real people interact with each other on real sets is a relief after the cold, plastic nightmares of “Spy Kids 3” and “Sharkboy and Lavegirl.”

Another big improvement “Shorts” makes over Rodriguez’ previous two kid flicks is the young cast. The child actors are actually pretty good here. Jimmy Bennett makes a likable lead as Toe, being on the movie’s manic wavelength but never coming off as annoying or mugging. Trevor Gagnon has a genuinely weird energy as Loogie, being believable as the kind of weird friend a kid like Toe would have. Jolie Vanier is especially good as Helvetica, a young schemer with an uncertain moral compass. Vanier clearly enjoys herself playing such a nasty kid. There are still a few missteps in the cast. Jake Short definitely overdoes it as “Nose,” the in-direct creator of that boogie monster. But it’s still a big step up from “Sharkboy and Lavagirl.”

As is expected by now, Rodriguez fills the supporting cast with quite a few recognizable faces. Jon Cryer and Leslie Mann play Toe’s parents. Cryer has a nice nervous angle, befitting a man who is on the verge of loosing his job. Mann compliments this with a more easy-going feeling. William H. Macy’s similarly neurotic comedic delivery is also well utilized as Nose’s germaphobe father. James Spader is well-cast as Carbon Black. Conceited villains with an air of detached superiority may be Spader’s specialty but few do it as well as him. Lastly, Kat Dennings plays Toe’s older sister, perfect casting for the type of older sibling that resents her hyperactive younger brother.

In theaters, “Shorts” was completely overlooked. It grossed a measly 29 million against its 20 million dollar budget, barely breaking even. While “Spy Kids” and even “Sharkboy and Lavagirl” have developed cult followings of sorts, I haven’t heard anyone talk about “Shorts.” Yet, despite some pretty big flaws, I still enjoyed this one way more than expected. Typically imaginative, the movie has quite a few good jokes, a likable cast, and an interesting narrative structure. If you like the first two “Spy Kids” flicks, I would recommend giving this one a look. You might actually dig it. [Grade: B-]