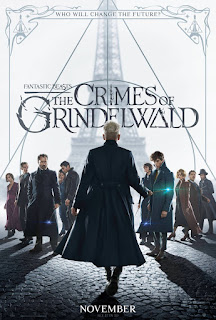 In our franchise-driven modern world, only abject failure can totally derail studio's plans for a long series of big budget blockbusters. The “Harry Potter” series is one of the few sure-shots Warner Brothers has, so they'll never let it end. So what if the first “Fantastic Beasts and Where to Find Them” received shrugs from both critics and fans? It made a lot of money and not a soul will dare say no to J.K. Rowling's ridiculously ambitious five film plans. Not even fans and culture-watchers protesting because an accused wife beater is starring in the sequel could put a dent in it. So “Fantastic Beasts: The Crimes of Grindelwald” – that title, others have observed, is a bit like “The Joy of Cooking: Judgment at Nuremberg” – is another hugely budgeted, hot nerd property that not many people were actually excited about.

I was sort of a fan of the previous movie. I liked the fantastic beasts, at the very least. I couldn't have given less of a shit about the impending wizard war or whatever it was. As the subtitle indicates, that's exactly what the sequel focuses on. Evil wizard Grindelwald escapes custody and heads to Paris, building his forces. The Ministry of Magic wants Newt Scamander to help hunt the would-be dictator down, even though he's a zoologist. Soon, most of the first movie's cast is caught up in a chase across Europe, old loves and secret identities coming up along the way. Everyone is seeking Credence Barebone, that orphan kid from the first movie that turned into a CGI destruction cloud at the end.

“The Crimes of Grindelwald” is, simply put, a bunch of convoluted bullshit. This movie's plot is not easy to follow. The sequel is more-or-less a collection of subplots, each one competing for screen time. You need a mental flow chart to keep track of who everyone is, where they are, and what they're after. The script is needlessly flabby. Before heading into the last act, a character goes into a lengthy flashback, explaining his backstory. Immediately afterwards, a second character launches into another origin-expounding flashback. The movie makes a lot of baffling decisions like that. Someone says one thing but later events contradict them. The film devotes precious screen time to developing minor characters it just kills off later. Meanwhile, important stuff – like a hero being convinced to go over to the dark side – is left completely off-screen.

As obsessed as Rowling's script is with explaining shit, it also leaves other moments needlessly vague. A major character appears about 100 minutes into the movie, with little explanation for why he's important. Afterwards, my friend and an angry woman in the audience explained to me that this guy is the inventor of the Sorcerer's Stone. Oh, that's a great idea, randomly introducing a character late in the new film that was last mentioned fifteen fucking years ago. Another seemingly pivotal plot device is introduced silently and then not brought up again until the final minutes. There's a lot of moments of unnecessary fan service in the movie. Such as a totally superfluous visit to Hogwarts. Or the role a young Dumbledore plays in the story, which is mostly ceremonial. Or how about finding out Voldemort's pet snake used to be a lady? If you think that information is going to be important, don't worry, it won't be.

The sequel has so much bullshit going on, that you'd think the attempts to leave room for interpersonal relationships would be admirable. Yet it mostly ends up being more noise, more nonsense that keeps the film from having any sort of steady story. So we meet Newt Scamander's brother, who is engaged to his old high school crush. (Their relationship is further established in yet another fucking flashback.) This isn't Newt's only romantic entanglement, as Katherine Waterston's wizard cop from the first movie is brought back. Don Fogler's Jacob and Alison Sudol's Queenie also return, even though they contribute little to the plot and have no real reason to be there. She does something extremely unfair to him but the movie does not treat this as a violation. Instead of humanizing the material, these stories just clog things up further.

“The Crimes of Grindelwald” isn't just hard to follow in a narrative way. This is David Yates' sixth film set in J.K. Rowling's wizarding world, and I imagine he's contracted for more. You'd think he would know how to shoot this stuff by now. Yet “Fantastic Beasts 2” is often visually murky. The opening sequence, devoted to Grindelwald escaping his flying prison transport, is incoherently cut, the camera jerking back and forth between events without much context. While none of the other action scenes are that badly handled, they frequently have a rushed and unstable feeling to them. Was Yates on a hurried schedule or does he just not give a shit anymore? I'm honestly leaning more towards the latter.

Despite getting the subtitle to himself, Grindelwald does not make the greatest impression as a villain. (His crimes, which extend to breaking out of jail and killing some people, are not exactly extraordinary either.) He spends most of the movie sulking around rooms, dictating plans to his various henchmen. Grindelwald's philosophy is that wizards are superior to humans and should take over the non-magic world. Despite that, “Crimes of Grindelwald” isn't really about this conflict. The film could've expounded on the way fascism rises, how it can convince otherwise reasonable people. Grindelwald's reasoning, that regular humans are about to create a new World War even more devastating than the last, is seductive. (He displays this prediction via magical vape.) This just ends up being another ingredient in the story's overstuffed stew. The film also implies Grindelwald could've prevented the Holocaust, which is certainly in questionable taste.

Despite the overwhelming amount of bullshit in the movie, occasionally “The Crimes of Grindelwald” does present an interesting moment. The first film shined when focusing on Newt's love of weirdo, magical animals. Though this stuff is totally superfluous to the plot, similar moments are a highlight of this film as well. There's a neat scene where Newt tames a wild kelpie and a reoccurring role for a Zouwu, a giant feline monster that maintains some charmingly cat-like qualities. (A scene devoted to very toyetic baby nifflers is less enchanting.) The romantic drama between Newt and Tina, another character who might as well not have been in the movie, is largely unearned. However, there is a cute moment when the two meet at a magical hall of records and resolve their problems via awkward flirting.

In fact, Newt Scamander really doesn't have that much to do in the film, despite ostensibly being the protagonist. Eddie Redmayne continues his twitchy, eccentric act from the first installment. He plays it up to largely diminished returns. Johnny Depp does not make an impression as Grindelwald. He speaks in that phony rock star accent and silently broods, seeming massively bored. Alison Sudol, charming in the first movie, gets the most strangled subplot in this movie, rubbing her character of any motivation. Zoe Kravitz is similarly left without much to do, despite the importance the film treats her with. Jude Law being cast as young Dumbledore was greeted with much hype. Law has a twinkle in his eye in his few scenes, comparable to Richard Harris' portrayal of the character. But that's about it.

“The Crimes of Grindelwald's” status as a cog in a franchise machine could not be more obvious. It leaves the fates of several characters up in the air, along with lots of other dangling subplots that can be resolved over the course of three more movies. The film's final scene is an especially ridiculous cliffhanger. My investment in the “Harry Potter” universe has always been loose at best. So many of the callbacks and references to series' history mean nothing to me. Yet even outside of its status as the latest entry in J.K. Rowling's saga, the second “Fantastic Beasts” is a shockingly incoherent experience. The plot is an utterly tangled mess, the action scenes are poorly handled, many of the narrative decisions are truly asinine, and the actors are left with almost nothing to do. The result is one of the least enjoyable big studio movies I've seen in recent memory. [4/10]