Usually when an actor directs a sequel to a film he appeared in, it's a case of a weary star being lured back with a chance to direct or a lead becoming the shepherd for the series that made him a star. It's very unusual for a minor player from the first movie to come back to write and direct the fourth movie. Then again, Shane Black was primarily a screenwriter when he appeared in the original “Predator.” In fact, Black returning to make a new “Predator” seemed like a slam dunk at the time. This hype was up-ended a few weeks before the film's release when a controversy, surrounding a bit part in the film being played by a registered sex offender, emerged. And then the very mixed reviews started to come out. Going into “The Predator,” I began to worry that this would be another “Iron Man 3,” where Black put his personal stamp on an established series and fucked it all up in the process.

In the depths of space, one alien ship chases another. The pursued ship, piloted by a rogue Predator, heads to Earth. He crashes and attacks a troop of black ops guys, led by Quinn McKenna. McKenna is the only survivor and ends up with some of the Pred's special equipment. Soon, McKenna is detained with an entire group of mentally unstable soldiers. But not before sending the alien tech to his wife and autistic son. The Predator was also captured and quickly escapes. It turns out he's being pursued by another warrior from his home world, a deadlier and more advanced one. McKenna, his son, a biologist who specializes in alien organisms, and a group of self-declared Loonies are caught in this interplanetary conflict.

As he did with “Iron Man 3,” Black makes no attempt to disguise his trademarks while working within an established franchise. The heroes are smart-asses, hard guys with mental health issues who have a bond. There's also a precocious kid, who naturally has a connection with the lead tough guy. The film is set around a holiday, though Black subs out Halloween for his preferred Christmas. That last choice may be the decision of Black's co-writer: Fred Dekker, the beloved but rarely utilized auteur behind “The Monster Squad” and “Night of the Creeps.” You can see Dekker's influence in other scenes, such as Rory being bullied at school. Or the genre-savvy characters, who do things like point out that the Predators don't actually live up to their names.

My biggest concern about Black directing “The Predator” was his tendency towards convoluted plotting and a complete disinterest in following established lore. Luckily, “The Predator's” plot is totally straight-forward, save for a few plot holes. Black doesn't totally fuck up the series' mythos either. In fact, the additions he makes to “Predator” lore are pretty compelling. The species' habit of collecting trophies from their prey is given another purpose. In their efforts to make themselves more effective hunters, the Predators have begun to genetically alter themselves. The primary antagonist, the Ultimate Predator, has the armor, blades, and cloaking device built into his massive jacked body. This seems like a logical extension of the species' technology. The film is set before the events of “Predators” and seems to show the beginning of the inter-species conflict that installment was about. We also see a prototype for the Predator hounds, who are much more canine-like and cuddly here.

I don't know how good Fox executives are at learning from their mistakes. However, it's definitely significant that the studio has never tried to make another PG-13 entry in the “Alien/Predator” franchise since 2004. “The Predator” is gloriously gory. The expected dangling, skinned corpses appear early on. The renegade Predator tosses people through the air. He tears a whole truck load of guys apart with ease. The Ultimate Predator is similarly adapt at dismemberment, blowing enemies apart or easily eviscerating them with his claw. There's even some alien-on-alien violence, plenty of green blood being spilled.

However, “The Predator” has a fairly serious problem in the editing department. There's a rushed, incoherent quality to some of the action scenes. Moments that should be important – like a major character comically, accidentally blowing his own head off – go by so quickly, they could be easily missed. Another moment has a child casually killing someone, without much attention being drawn to it. Other times, the editing seems to confuse or disguise simple plot points. In one scene, the characters are in an RV. In the next scene, they each have their own cars. A dog seems to play a significant role before vanishing after a key moment. The final fight also features a character suddenly appearing and disappearing. It seems to me that Shane Black or whoever wanted to get “The Predator's” run time as tight as possible ended up cutting out some important details in the process.

Or maybe “The Predator's” post-production was rushed in general. Many of the special effects are perfectly serviceable. The practical creature effects are all fun. The CGI frequently functions believably, even cleverly. Such as when dripping blood reveals a cloaked Predator. Other times, however, the CGI leaves a lot to be desired. The CGI on the Predator Dog varies from decent to shaky, depending on the scene. A moment, where the Ultimate Predator grabs a soldier and bites his head off, looks overly artificial. A dismembered body flying through the air near the end is awkwardly green-screened. There's a lot about “The Predator” that suggests sloppy re-shots and re-editing.

I've read people complaining about the editing and the effects in “The Predator.” Yet the element that seems to bother people about the sequel the most is its treatment of autism. McKenna's son, Rory, is identified as having Asperger's. He's sensitive to loud sounds, speaks in an overly specific manner, and is socially withdrawn, leading to him being bullied. None of that seems especially egregious. However, “The Predator” eventually piles on that old chestnut about autism being magic. Rory is gifted with technology and computers, easily learning how to use the Predator tech. Eventually, the movie drops the bombshell that autism isn't just neuro-divergence. It's the next step in human evolution. While I'm sure the filmmakers meant well, and Jacob Trembly is fine in the part, they end up playing into a lot of dehumanizing stereotypes about the autism spectrum.

While many of “The Predator's” problems are hard to ignore, the likability of its cast goes a long way.  I was worried Boyd Halbrook, best known as one of the villains in “Logan,” was going to be one of those boring, pre-fab Hollywood leading men. However, he proves to be quite charming as Quinn McKenna. Halbrook adapts well to the typically caustic sense of humor all Shane Black protagonists must have. (I do wish Yvonne Strahovski, as McKenna's long suffering wife, was given more to do. She disappears half-way through the movie and isn't seen again.) I also liked Oliver Munn as Dr. Bracket. Munn is equally quick with a comedic one-liner as she is during the action sequences. 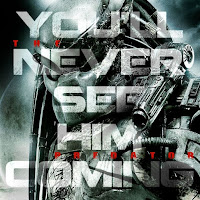 The group of PTSD-afflicted soldiers, the self-proclaimed Loonies, that help McKenna could've been easily annoying characters. Yet they prove surprisingly likable as well. Thomas Jane's Baxley is not a very flattering depiction of Tourette Syndrome. However, his mental trauma is taken seriously. The bond he forms with Coyle, played by Keegan-Michael Key, is also interesting. Borderline homoerotic, the two share a special bond and struggle with their trauma in their own ways. Trevante Rhodes, as Nebraska, has a heroic streak despite his suicidal tendencies. Augusto Aguilera's Nettles also shows an interesting child-like quality, along with a more erratic side.

Some have complained that “The Predator” is too flippant. This is not an unfair criticism. The hyper-profane dialogue becomes a bit much at times, especially with Jane's sprouting random swear words. Everyone is cracking jokes, no matter how serious things get. Probably the most embarrassing moment in the film occurs when the lead character has to suddenly go to the bathroom. There's a plot reason for this but it definitely feels unnecessarily crass. Still, a lot of the jokes in “The Predator” work. Such as Munn accidentally hitting herself with a tranquilizer gun, the attempts by the men to win over the female scientist, and a scene where the guys debate on whether or not they should follow the hero.

While Black didn't seem very interested in the “Iron Man” lore, he obviously loves the “Predator” franchise. There's quite a few callbacks and references in the latest sequel. Henry Jackman's score makes sure to incorporate many of the classic themes from Alan Silvestri's beloved original soundtrack. Jake Busey appears, playing the son of Gary Busey's character from “Predator 2.” There are cheeky homages to the original's most famous lines of dialogue. This stuff is a little corny but far more charming than the attempts to set-up a potential sequel. That final, belabored scene goes on far too long and ends with an underwhelming reveal.

It's already clear that “The Predator” is a divisive film. Some hardcore fans of the franchise have dismissed it. Others have loved it. Such a mixed response is actually totally fitting. “The Predator” does some things really well. It puts a clever spin on the series' mythology, features some likable characters and actors, and definitely has its charming moments. At the same time, the editing and special effects are inexcusably bad at times. Some of the writing decisions are practically tasteless. If nothing else, I find it more interesting than “Predators.” Though definitely a bit of a mess, I would still consider the latest “Predator” an entertaining hundred minutes at the cinema. [Grade: B]