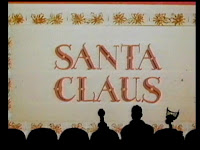 My love of “Mystery Science Theater 3000,” weirdly, has not come up too often on this blog. I guess I figure it goes without saying. I love old genre movies, low budget filmmaking, robots and puppets. “MST3k” is exactly in my wheelhouse and always has been. When it comes to MST3k holiday episodes, the go-to answer is usually “Santa Claus Conquers the Martians,” from season three. However, I reviewed that film in its raw, unriffed form back in December of 2015. Not wanting to repeat myself, I instead opted for the other Christmas-themed MST episodes. That would be “Santa Claus,” from season five, after Mike became the human host.

Unlike “Santa Claus Conquers the Martians,” which was home-brewed American weirdness, “Santa Claus” is imported holiday hokum. The film was originally made in Mexico, for Mexican audiences. So its take on the Santa mythos is culturally specific. This St. Nick lives on the moon, instead of the North Pole. His reindeer are robotic automatons. A wizard, named Merlin in the English dub, helps him build his toys, not elves. Reflecting Mexico's nature as a deeply Catholic country, the film's plot sees Santa Claus fighting a devil sent to Earth to corrupt innocent children. (This is in addition to several religious mentions sprinkled throughout the film.) The English dub, via the power of re-editing and overzealous narration, manages to make a weird Mexican kid's movie even weirder. 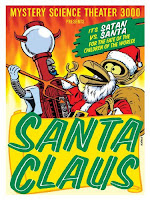 Taken on its own, “Santa Claus” is actually the perfect kind of film for “Mystery Science Theater.” It is, by no traditional metric, a good film. The special effects are cheesy, unconvincing, and frequently unnerving. The story is nonsensical. Many of the film's choices are bizarre and unintentionally hilarious. Such as an overly verbose narrator and an ineffective villain. There's lots of long dialogue-free segments, allowing plenty of room for riffing. And yet “Santa Claus” is a film I'd almost be willing to watch without Mike and the Bots. The film's sets and props are bizarre. The disembodied body parts and robotic reindeer are honestly creepy. This combines with the movie's sometimes harsh tone – a devil tempting kids to commit murder, a world where the poor considering theft to survive – to a create a likably weird kid's movie. It's also all on accident too, as nobody involved in “Santa Claus” knew they were making something weird or creepy. That homemade quality adds a lo-fi charm to a film with an excruciatingly slow pace and terrible acting.

As an episode of MST3k, “Santa Claus” is of high quality as well. The riffing is frequent and often hilarious. Notable jokes include Mike and the Bots interpreting Santa's odd looks as he plays music for a gang of singing children. The bots often improvise their own lyrics for the musical numbers too. The gang's reaction to the film's villains – who they characterize as flamboyant, put-upon by his own incompetence, or overly sadistic – are one of the episode's best gags. The way they draw attention to Lupita's often awful situation, contrasting with the film's cheery tone,  is one of the writers' more insightful jokes. One of the best running jokes in the film is how the hosts respond to the film's chatty narrator. 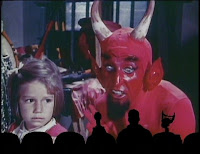 While rarely the high-light of any episode, the host segments for “Santa Claus” are pretty amusing too. Two of the segments feature music. The first involves Mike and the Bots forming a prog rock group named Santa Klaws, which perform a whisper-y, synth-filled Christmas ballad of their own. Later, the gang joins together to sing a non-denominational Christmas carol called “Merry Christmas... If That's Okay.” That jokes leans on good ol' fashion absurdity more than its War on Christmas premise suggests. There's some other good jokes here too, like the Bots attempting to contact Mike's family for the holidays but instead talking to some other Nelson family. (Who are unmoved by the sight of two robots on a space station talking to them.) The episode concludes with a funny gag of snow falling on the Satellite of Love.

This episode remains a fan favorite among MSTies. It has been highly rated among several polls, deciding the show's best episodes. The characters of Santa Claus and Pitch the Devil would appear in a few other host segments. RiffTrax, Michael J. Nelson's eventual successor to his version of “Mystery Science Theater 3000,” has also covered the film several times. It all combines to make an ideal bit of oddball holiday cheer. The film itself is entertainingly weird on its own. The MST3k gang, meanwhile, provide jokes and wisecracks of a highly amusing nature. I highly recommend it! [7/10]

Despite my general love for “Batman: The Animated Series,” I have very little exposure to “Justice League,” its eventual spin-off. I have heard that the show's sole Christmas episode, “Comfort and Joy,” is well regarded. It's also fairly isolated, being the sole stand-alone episode in a season composed of two-parters, so it sounded like I could drop right in on this one. The episode concerns the League going their separate ways for the holidays. Superman visits his parents in Kansas and brings along Martian Manhunter, who has no familiarity with Earthly holiday customs. The Flash performs his yearly tradition of grabbing the season's hottest toy for an orphanage in Central City. Along the way, he encounters erudite villain Ultra-Humanite. Lastly, Green Lantern and Hawk Woman vacation on a wintry planet and, at her suggestion, end up in a bar brawl somewhere else.

“Comfort and Joy” resonated with me because of how it shows the different ways people celebrate the holidays. Clark Kent returns home, spending the day with holidays. The Flash focuses on charity, giving to the needy. This spirit of giving ends up infecting the Ultra-Humanite. While destroying a modern art museum, which he sees as an affront to classical aesthetics, the Flash talks Humanite into helping him give a gift to the kids. (Though he reprograms the toy – a rapping, farting robot duck – to play the Nutcracker Suite instead.) This subplot comes full-circle at the end, when Flash presents the villain with an aluminum Christmas tree in his prison cell. This ends up reminding the bad guy of his own childhood.

Some people don't celebrate at all. Hawk Woman, another alien, commemorates Christmas by picking fights in alien bars. This, however, ends up bringing her and Green Lantern – apparently they have romantic feelings for each other – closer. And that's what it's really all about, isn't it? While bunking with the Kents, Martian Manhunter gets familiar with Christmas traditions. Like gift-giving, caroling, or leaving cookies out for Santa. In the end, the alien finds himself touched by giving kindness and receiving kindness in turn. (There's also plenty of cute gags here, like the Kents wrapping Superman's gifts in lead foil, so he can't peek with his x-ray vision.)

“Comfort and Joy” is pretty low on typical superheroic action. The episode begins with the League saving an alien world from colliding with another planet. There's a brief bit of Flash's superspeed, while trading blows with the Ultra-Humanite in the museum. Most of the action coems from Green Lantern and Hawk Woman's barroom brawl. Otherwise, this is an episode focused on characters. And that's why it works. It ends up being a surprisingly touching half-hour. [8/10]