We are currently flushed with vampire-related media but, truthfully, the creatures have always been an evergreen part of the horror genre. Though the recent wave favors the sparkly variety, think back to the late nineties. The twin success of “From Dust til Dawn” and “Blade” sparked an interest in hard-R, bloody action movies as much about the vampire hunters as about the creatures themselves. Though that wave more or less ended with “Vampires,” and eventually curdled into the rancid “Underground” franchise, the film is an entertaining potboiler in the sometimes disappointing latter half of the filmmaker’s career.

Loosely based on a novel by John Steakley, the film presents a blue-collar approach to vampire hunting. Jack Crow and his team of Vatican-sponsored vampire hunters seem to function like highly specialized exterminators. They travel the country cleaning out infested houses, treating the vampires much like common, though highly dangerous, pests. The first sequence sets up the rules of vamp hunting but also the casualness of it. Of course, a movie about the 24/7 work-a-day lives of vampire slayers probably wouldn’t be very interesting, so Jack’s team is slaughtered by a Big Bad, the first of all vampires, and our hero sets out on a quest to prevent the impending vampire apocalypse.

Carpenter has long expressed his desire to make a Western and, in a lot of ways, “Vampires” fits the bill. The camera frequently lingers over the wide desert vistas of the South-West setting. The red clay buildings and monks in brown robes seem to be from another, older era. Carpenter focuses on his leading men’s faces, most notably during a slow pan into James Wood’s face in the opening scene. This recalls Sergio Leone, as does the occasional Morricone-esque horns on the soundtrack. Before most of the cast is killed, it’s easy to imagine the movie going in the direction of a men-on-a-mission flick, a horror-fied version of “The Magnificent Seven” or “The Wild Bunch.” Scenes like one of the heroic rogues hijacking a car wouldn’t be entirely out of place in a spaghetti western either, if you substitute “horse” for “car.”

But the movie is far more indebted to a more recent trend: Eighties action movies. “Vampires” is invested in tough guy heroes gunning through hordes of mooks. Machine guns blast vampires full of bloody holes. James Woods wields an awesome crossbow in several scenes. Bite wounds are cauterized on blazing gun barrels. In one of the film’s most suspenseful sequences, vampires burst through walls and elevators at the protagonists. The heroes stand strong, blasting the monsters point-blank in the face, even while being dragged across the floor. The film even practices some of the genre’s goofier clichés. Crow doesn’t look at an explosion as he walks away from it. Cheesy one-liners are tossed around, some of them really groan-inducing like “How do you like your stake?” or “Suck this!”

Another element of eighties action flicks is deeply ingrained in the story: Dudesweat and machismo. “Vampires” has more homoerotic subtext then it does blood and bullets. The movie is, covertly, about the romance between James Wood’s Jack Crow and Daniel Baldwin’s Montoya. Baldwin is introduced urinating next to Woods, demonstrating their bro-dom. This happy couple is split up by Sheryl Lee’s Katrina. Though Montoya is resentful of the girl at first, swearing at her and smacking her around, the two develop an unconvincing romance. From a plot angle, sure, Jack is just suspicious of the girl because she’s becoming a vampire. But why does Woods play his reaction less as righteous anger and more like petty jealousy? His contempt is violent and obvious. Jack is right about the bitch too, since she bites into Montoya’s throat like a Doritos Locos Taco. This isn’t even enough to pull the two apart. When Jack is strung up on a cross, looking like a sweaty leather daddy, Montoya is there to save him. Despite his hatred for vampires, Jack lets his former partner go, saying goodbye with a manly embrace.

When Baldwin breaks Jack’s heart but falling for that slutty, vampire whore, Tim Guinee’s Father Guiteau, a young Catholic priest and a total fan boy for Jack, is there to pick up the pieces, filling the hole in Woods’ heart. Jack displays this blossoming affection by kicking him in the ass, knocking him to the floor, ordering him around, and cutting him with a knife. But Jack’s romantic interest is made obvious, especially when he flat-out asks the young priest if he gives him an erection. It takes the rest of the movie for him to come around but, when asked the question again at the film’s end, Guinee responds positively.

Further proof of the movie’s macho streak comes in its treatment of female characters. All the women in the movie are either hookers or vampires. Woods is barely interested in the cascade of female flesh on display at the motel. His teammates, all of them enjoying the prostitutes, are punished for conforming to heterosexual norms by being slashed to bits by the deeply straight-to-the-point-asexuality vampire villain. One of the most graphic death scenes in the movie is reversed for a random female vampire, who is graphically staked, dragged into the sunlight, and explodes in a lingered-on, massive fireball. All of this is so obvious that I can only conclude that Carpenter, the writers, and the cast were intentionally in on the joke.

So there isn’t much of a focus on scares here. An early investigation of a dusty, old house features some shadows and a jump scare or two, but that’s about it. Instead, the horror elements come through in the heaps of gore. Bite marks are bloody and explicit. A stake is slammed straight into a vamp’s head, for no reason other then that it looks cool. The movie’s crowning moment of gore comes when master vampire Valek splits a guy in half right down the middle. As somebody who appreciates practical effects and good ol’ fashion American violence, I say that’s awesome. Hands are stabbed through chest, brains are splattered with shotguns, throats are torn out, we have decapitations with claws and axes, and the movie even squeezes in a fountain of blood. When exposed to sunlight, the vampires burst into flames, jets of fire shooting out of their arms, reduced to smoldering skeletons. It’s not subtle but it is fun.

James Woods has a ball in the lead. Jack Crow is practically Mel Gibson-ian in his attitude. He’s tough, actively misanthropic, snarling, swearing, sweating, and clad in a leather jacket. He has a tragic back-story but it’s barely focused on. Instead, he’s an angry, mean guy who just wants to kill as many vampires as possible. Woods drops blatant exposition as smoothly as possible. Sometimes it’s awkward, such as when he’s berating Baldwin on the side of the road. Sometimes, it’s a little cooler, like when dismissing traditional vampire beliefs. Either way, Woods hams it up, given the rare chance to play a macho bad-ass action hero.

Thomas Ian Griffin’s Valek is a classical evil vampire. Tall, pale, with long black hair, he conveys a threatening air with little more then a glance or nod. The traditional cape and collar are traded out for a long black trench coat. Though Griffin perhaps doesn’t do more then snarl, adsorb bullets with arms outstretch, and kill lots of people, he has something the best actors aren’t always gifted with: Screen presence. He’s a perfectly memorable villain.

The supporting cast isn’t quite so solid. What about Baldwin? His cockiness works well enough, especially when badgering a hotel clerk for little to no reason. His reaction with Sheryl Lee is hardly romantic, more gruff and sexist, and their eventual romance comes out of nowhere. Dialogue that is supposes to be romantic comes off as boorish and stiff. Lee is mostly there for eye-candy. She’s a plot device, connecting our hero to the villain. Guinee is a nice foil to Woods’ swagger. Maximilian Schell’s extended cameo works better in the third act, after a villainous turn. Despite the presence of great character actors like Mark Boone Junior and Cary-Hiroyuki Tagawa, they get killed before making any sort of impression.

Carpenter’s direction makes a strong comeback. The opening pan across the desert recalls shots in some of his best films. There are plenty of POV shots, most of them from the vampires as they are dragged out of a house or cut through innocent people. Montages are deployed during the motel slaughter, which is a little awkward. Woods cleaning up the same location the next morning is far more effective. 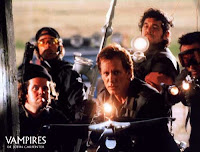 His country-fried score is another strong factor. The main theme is rollicking, setting up the ass-kicking tone. Bluesy riffs frequently kick in on the soundtrack, as the weary characters march down an empty road. Guitars jangle and rattle during various montages. It’s a strong rock n’ roll score, connecting deeply with the film’s themes and aesthetic.

“Vampires” is simplistic, rolling along at a decent pace, story elements connecting easily. It’s not great art at all and, perhaps, represents Carpenter’s further degradation as a filmmaker. The film is swift, effortlessly entertaining, and goes by quickly enough that you don’t have time to question any of its flaws. It’s become something of a cult favorite among gore aficionados and cheesy action movie fans, spawning a series of lousy direct-to-video sequels. [Grade: B+]
Posted by Bonehead XL at 10:00 PM