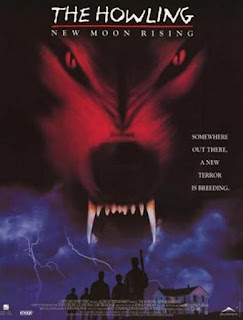 From any sort of narrative perspective, most of the “Howling” films are unrelated to each other. Aside from a token attempt to link “Your Sister is a Werewolf” to the original, only the presence of werewolves connected the rest of the films. Behind the scenes, however, there’s a little more conjunctive fibers. Phillippe Nora directed two and three, after all. Producers Steven A. Lane and Robert Pringle were involved with nearly the entire series. And then there's Clive Turner. Turner produced, co-wrote, and acted in “Howlings” four and five, even doing some uncredited directorial work on “The Original Nightmare.” Turner's enthusiasm for “The Howling” was such that he would be the primary creative force behind the seventh entry in the series, “The Howling: New Moon Rising.” The resulting film is easily among the oddest sequels in a semi-well known horror franchise I've ever seen.

A dead body is found outside the small town of Pioneerville, California. A detective is dispatched to investigate, soon teaming up with a Catholic priest who is convinced a demonic werewolf is behind the slayings. Though the detective is skeptical at first, the priest's thorough research soon convinces him. Meanwhile, a mysterious Australian man named Ted arrives in Pioneerville. He befriends the townsfolk, romancing a local woman and spending time at the country-and-western bar. However, some people begin to suspect that Ted and the mysterious werewolf murders in the night may be linked.

Once upon a time, another low budget werewolf feature was described as “a movie that takes it time and hangs around in bars.” This sentence rather literally describes “New Moon Rising.” Well over seventy percent of the seventh “Howling” movie is devoted to the locals of Pioneerville – playing themselves – sitting in a honky-tonk bar. They drink and clean up tables. They listen and play a lot of country and western music, sometimes while line dancing. They trade in-jokes and personal anecdotes that must be hilarious if you knew these people personally. In fact, “New Moon Rising's” status as a werewolf movie seems incidental to its actual goal. Clive Turner fell in love with the residents of Pioneerville. He wanted to share them with the rest of the world, producing a whole film around this purpose. This essentially makes “New Moon Rising” an elaborate home movie.

Despite clearly not being that interested in making a werewolf movie, Turner was also determined to make “New Moon Rising” the caper on a trilogy. The film weaves “The Original Nightmare,” “The Rebirth,” and this film – the three “Howling” sequels Turner was involved with, incidentally – into one story. It does not do this elegantly. The story of the detective and the priest is largely disconnected from the rest of the movie, at first. Long scenes are devoted to the priest dumping exposition on the cop. Quickly, this devolves into extensive stock footage from the fourth and fifth film, as these unrelated stories are awkwardly woven together into one story. Turner at least went to the effort to get Romy Windsor, the protagonist of part four, back for a brief part. (That the superior “Howling VI” is left out of the movie's lore makes “New Moon Rising” seem even more like an ugly vanity project for Turner.) 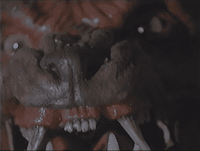 “The Howling VII” very rarely attempts to be a real movie. For most of its run time, it exists as an extremely shaggy combination of a franchise clip show and footage of Clive Turner and his friends hanging out. There are no actual werewolf attacks in the film. Instead, we get recycled footage from previous movies and red-tinted point-of-view shots. In its last third, “New Moon Rising” remembers that movies are suppose to have actual plots. At this point, there are even more awkward plot points sorted out through exposition. The werewolf's identity is bluntly revealed. (Apparently werewolves can change their appearance.) This leads to our on-screen transformation... Which is accomplished by having the actor's face crudely morph into a werewolf head that wouldn't pass mustard as a Halloween mask. The film then ends abruptly, with yet more singing and dancing.

In other words, “The Howling: New Moon Rising” is one of the damnest films I've ever seen. It does not follow the rules movies are suppose to, clearly being the work of amateurs. If you go in expecting a werewolf movie that follows the traditional trajectory of cinematic art, you'll probably agree with those that say “Howling VII” is among the worst werewolf movies ever made. If you go in expecting a piece of outsider art, a baffling homage to a small town and the people who live there, you'll get a lot more out of it. Turner somehow tricked New Line Home Video into distributing this on video, meaning they could slap “From the Creators of “A Nightmare on Elm Street”” on the box, but it remains unreleased on DVD. Granted, this is still a pretty bad movie no matter how you slice it. Yet it's a fascinating bad movie, one that makes you wonder how the hell it got made. [4/10]