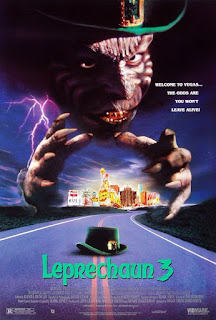 Inexplicably, “Leprechaun 3” is the part of the franchise that I’ve seen the most. It was the first “Leprechaun” movie I’ve ever saw. During middle school, a friend of mine brought over a VHS tape of the movie after school. We watched it, mocking it all the while. I didn’t think the movie was very good but, obviously, I stuck with the series. Here I am, reviewing all of them. “Leprechaun 3” plays a little better now that I’m an adult. By now, the series is fully committed to its ridiculousness. “Leprechaun 3” might as well be called “The Leprechaun Goes to Las Vegas.” The glitzy city is associated with luck and so are leprechauns, I guess. Anyway, as always, there’s no direct connection with this film and the previous two.

The Leprechaun first appears here as a statue, brought into a Vegas pawn shop. When the greedy shop owner removes the magical pendent, the Leprechaun is free to wreck havoc. A traveling kid who has stopped through Vegas stumbles into the shop after blowing his life saving at the roulette table. There, he stumbles upon one of the Lep’s coins. This time, the coin has the magical ability to grant wishes. The coin has a bad habit of passing hands just as the Leprechaun shows up to kill the last person who had it. Our hero Scott and his love interest Tammy have to stay ahead of the devious dwarf.

“Leprechaun 3” was directed by Brian Trenchard-Smith, a prolific Australian schlock-master. Trenchard-Smith previously made “Night of the Demons 2,” something like a favorite of mine and arguably the best of that series. (“Lep 3” even features a cameo from “Night of the Demons 2’s” Father Bob!) That film benefited from its quirky cast of characters. The oddball collection of characters in “Leprechaun 3” aren’t as appealing as that film’s. However, there are some notable cast members. John Gatins is a lovable loser as Scott, the film’s gee-shucks hero. Lee Armstrong is Tammy, his love interest. She’s a good enough actress but she’s also lovely and spends the whole movie in a tight, revealing outfit. Caroline Williams, already a cult favorite for her leading role in “Texas Chainsaw Massacre 2,” plays Loretta, a bitchy casino employee who wants to be beautiful. When her wishes is granted, Williams’ all-ready campy performances goes even further over-the-top. Michael Callan is delightfully sleazy as Mitch, the handsy owner of the casino, while John DeMita’s stuck-up magician Fazio is exactly the type of horror character we love to hate. My favorite minor characters in the film are two bouncers who some insecurities about their fashion choices.

In previous films, the Leprechaun usually tore his victims apart with his claws or a random object lying around. However, part two introduces magic into the Leprechaun’s arsenal. The third film runs with this idea. Now, the Leprechaun is offing his victims with his magical abilities, usually twisting their wishes against them. Because all of these movies are epically dumb, this leads to some bizarre, hilarious death scenes. Mitch is electrocuted to death by a robot stripper who emerges from his TV. Loretta’s tits, ass, and lips expand until she explodes. Fazio is chainsawed in half inside his own magic box. The gore, though fairly wet, is too ridiculous to be disturbing. Even when the Leprechaun takes people out with weapons or his claws, things remain silly. The series has graduated fully to horror/comedy.

The most ridiculous thing to happen in the film, which is no small feat, is when Scott becomes a were-leprechaun. That’s right. The critter bites the boy, splashing the wound with his green blood. Next, Scott grows scraggly hair, patchy skin, and exaggerated features. He starts to covet gold, speak in rhyme, and crave potatoes. When rushed to the hospital, his blood work read up is covered with shamrocks. It’s an utterly insane plot element. The attempt to play Scott’s descent into evil for serious drama is… Well, I’m not buying it. The Leprechaun remains the clown he’s always been. He hangs out with an Elvis impersonator, cracks jokes about Vegas, makes puns after being tossed out a window, and makes up more ridiculous rhymes then ever before. Clearly, Warwick Davis enjoys doing this.

“Leprechaun 3” still drags in a few spots. It’s obvious there wasn’t quite enough script even for a brief 90 minute run time. The story is awkwardly divided between the casino and the pawn shop for half of its run time. However, the film is kookier than the previous two entries. The franchise edges closer and closer to genuinely amusing with each new film. It’s a dumb, goofy treat for folks with the stomach for this kind of silliness. [7/10]