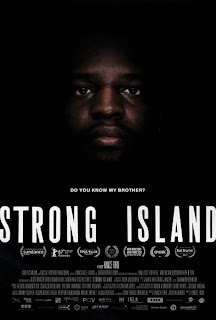 For a while, it seemed like the Academy was resistant to the idea of films being distributed via digital streaming. If the Netflix logo being greeted with jeers at film festivals is any indication, certain portions of the film community is still resistant to it. However, digital releases have made some serious in-roads with the Academy this year. “Mudbound” scored some high nominations. The documentary category, meanwhile, is dominated by digital distribution. Three of the nominees in this category were released primarily through digital platforms. “Strong Island,” for example, was also a Netflix release. As time goes on, I suspect we'll see more and more nominees released in this manner.

“Strong Island” is from black transgender documentary filmmaker Yance Ford. In 1992, Yance's brother, William, was murdered. Following a brief confrontation at an auto shop, William was shot and killed by a 19 year old white man, Mark Reily. Reily claimed self-defense and was completely dismissed of all wrongdoing by an all-white jury. In the years since, the Ford family has been torn apart by grief at William's death and the injustice of his murderer escaping punishment. “Strong Island” concerns the family's attempt to find some sort of peace over this.

“Strong Island” is, more than anything else, a portrait of a family. The film spends a lot of time with the family before even discussing the facts of William's murder. We hear from his siblings, mother, and friends about his life. Yance discusses driving around with him, receiving encouragement from him. Lauren Ford talks about reading comic books with her brother or seeing movies with him. His friends recall fond memories of playing football or driving around, trying to find women. “Strong Island” gives you a strong idea of this family, the connections and love they had, before introducing you to the senseless tragedy that happened.

And that tragedy did not occur in a vacuum. One of the earliest scenes in the film has Yance's mother, Barbara, discussing an anecdote from her youth. How her father died of an asthma attack because he was forced to wait in the colored waiting room at the hospital. Ford devotes time to explaining the racial breakdown of her neighbor, how it was essentially a segregated black community inside a predominantly white island. About how her parents both had to work hard, long jobs in order to give their children a future. It's absurd to think the color of the attacker and victim's skin had nothing to do with how things played out. It's an injustice that continues, as many involved with the court case, even two decades later, refused to talk to Ford for the film.

While racial prejudice and the role it played in her brother's murder is clearly a big competent of “Strong Island,” grief seems to be the primary theme of the film. The film's visual presentation confronts the audience head-on with this. Ford frequently talks directly into the camera. The film is full of shots of the family home, devoid of people, seeming stark and empty. Another reoccurring visual of the film are family photos, laid out simply in view of the audience. Upon hearing about the flimsy reasons why Mark Reily's self-defense claim was believed, Yance breaks down, weeping long and hard. We see the emotional toll William's death took on the entire family, how it contributed to his father having a stroke or Barbara's mounting health problems. William's death created trauma that may never heal.

“Strong Island” is a highly personal film, obviously. It's successful in making the audience feel the loss the entire Ford family went through, their pain, anger and frustration at a justice system that failed them. Ford's directional sense is strong, creating a film that communicates its themes visually as well as through its interviews. It's not an easy watch but a necessary one, drawing attention to a problems in this country as well as painting a portrait of a family torn apart by a loss. [7/10]