For years, “Fast Company” had the reputation of being the lost David Cronenberg movie. It was barely distributed in the states and basically went unseen for a long time. It sticks out among his work. “Fast Company” is not full of the pulsating tumors, deprived sex, and mad science you associate with the director. Instead, it's just a race car movie. Due to it being unavailable for years, fans jumped to conclusions about “Fast Company” for a long time. It was widely assumed that Cronenberg made such a pedestrian movie against his will. However, it turns out that David Cronenberg really likes cars. “Fast Company” was an expression of this often unnoticed motorhead side. Now, it stands as a curio among his cult-favorite pictures.

Lonnie “Lucky Man” Johnson is a professional drag racer. He is sponsored by motor oil company, Fast Co. Lonnie frequently bristles against his team boss, Phil Adamson. Phil only cares that the car makes his product look good. Lonnie, however, is motivated by his love of speed and racing. Eventually, the two get tired of each other's games. Lonnie punches Phil out and Phil fires Lonnie. This forces the experienced driver and his team, including young buck and would-be racer Billy “the Kid,” to steal back Lonnie's car. Adamson gives the corporate sponsor to Gary Black, Lonnie's rival, and is willing to do anything – even murder – to insure his man wins.

This not very much to say about “Fast Company's” narrative. It's a race car movie. There's the expected beats of the sports genre. You have the hero who is pulled between his love of racing and his girlfriend's love. You have the bitter rival who faces him down on the track and the young buck who attempts to usurp him. There's the expected races, crashes, and arguments. The movie's script, which Cronenberg co-wrote, does little to shake up this formula. However, I'll give the script this much. It doesn't have the lack of focus “Shivers” and “Rabid” suffered from. I guess sticking to a well worn recipe kept that from being a problem.

I don't know what Cronenberg contributed to the script and what the other credited writers, Phil Savath and Courtney Smith, added. However, if I had to guess, I'd say the scenes devoted to Lonnie rebelling against his corporate sponsors were Dave's. There's a certain palatable frustration in Lonnie's struggles against his boss. There's also an obvious glee to the moment where he gets sarcastic during a commercial shoot, ending it by flicking the bird. If you think of the FastCo sponsors as an evil corporate, and their attempts to control Lonnie as a conspiracy, it becomes pretty easy to draw a line from “Fast Company” to “Scanners” and “Videodrome.” And that's sort of interesting.

Mostly, it seems to me that “Fast Company” was meant as wish fulfillment for race car drivers. There are two scenarios that I imagine are common fantasies. After stealing his car from an auto show, Lonnie gets to take his drag racer out onto the normal street. The movie's big climax is a race between the speedster and an airplane, another scenario people spitball about I suspect. The movie also transforms a simple driver into an action hero. He gets into a dramatic fist fight, tossing a baddie into a fire. He even gets to kill the bad guy at the end, clipping the airplane with the car and causing a crowd-pleasing explosion. Amusingly, Lonnie never faces any repercussions for killing his boss!

You can most feel Cronenberg in the way “Fast Company” is directed. There's a certain scientific detachment to many of the film's scenes. As you'd expect from a motorhead movie, “Fast Company” has quite a few scenes of people working on cars. Cronenberg's camera watches the mechanics pull out the engines, attach the fiberglass hoods, adding new wheels and machinery with a scientist's focus. These scenes are often quiet, adding to their contemplative fashion. At one point, Cronenberg sticks his camera in the cockpit of a race car. As it drives, the speedometer appears above. This feels like a scientific experiment grafted into the narrative and is, unsurprisingly, one of the movie's most interesting scenes.

There wasn't much of what you'd consider typical action scenes in Cronenberg's last two movies, though I guess parts of “Rabid” kind of count. “Fast Company” has the director slipping pretty easily into action mode. The race scenes are decently directed. As with real race car tracks, the crashes are the most exciting parts. The first crash happens because a pipe drags against the track, causing sparks and an explosion. That's well directed. So is the scene where fire breaks out inside the dragster, forcing Lonnie to use a built-in fire extinguisher. The climatic car/plane race is a little more awkwardly framed though, probably because it was a trickier stunt to pull off. Still, Cronenberg adapts to the change in genre alright.

The most Cronenbergian scene in the movie was apparently clipped out in some cuts in order to insure a PG rating. While driving down the highway, Billy picks up a pair of sexy young hitchhikers. He takes them into the trailer and nature takes its course. While the actual sex is off-screen, we do see the partially nude threesome share a joint afterwards. It's here that Billy opens a can of motor oil and smears it over the one girl's naked breasts. You can see shades of “Crash” in this moment, Cronenberg attempting to bring some kinky sex and a crude fusion of man and machine even into material as dull as this.

“Fast Company” is a vehicle for William Smith. After beginning as a child actor, including a small role in “Ghost of Frankenstein,” Smith would headline quite a few exploitation action films during the seventies. “Fast Company” is pretty typical of his work during the latter half of the decade. Smith is a likable lead, striking the viewer as a vaguely Bronson-esque tough guy. Smith is most charming during the failed commercial. The script is not especially deep material so Smith's simple charms, a leathery skinned fellow with a knowing smile and large biceps, have to be enough to carry the part. It does pretty well, I guess. 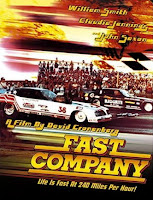 More entertaining is John Saxon, another character actor who starred in a bunch of low budget flicks during the seventies. He gets the juicer part in “Fast Company,” of Phil Adamson. The villainous part allows Saxon to be as sleazy as he wants to be. He schemes in an especially greasy way, practically rubbing his fists together in evil glee. Yet, weirdly, Saxon never goes over-the-top. He still plays Phil as a human being with his own motivations, no matter how morally bankrupt they might be. That's because John Saxon is a friggin' professional. He's one of the best things about “Fast Company.”

Claudia Jennings appears as Smith's love interest. The two have decent chemistry and she shows a fiery energy that I like. The scene where she believes Lonnie is cheating on her is especially amusing. (Jennings, sadly and coincidentally, would die in a car crash shortly after the film was released.) Nicholas Campbell plays Billy. Though he doesn't expand the part pass the impulsive young hick he's written as, and wears a frankly embarrassing red speedo in one scene, Campbell is still suitable in the role. Cedric Smith is somewhat interesting as Gary “The Blacksmith” Smith, Lonnie's primary rival. Despite being his primary competitor, Smith still plays Gary as someone with some honor. He is aghast at the suggestion that he would use sabotage agaisnt his opponent. He wants to beat him fair and square.

This was probably only the second time I watched “Fast Company,” which is a lot less than most of Cronenberg's other movies. To be totally honest, I forgot most everything about the movie in-between these viewings. The element that stuck with the most was not the car crashes or even that motor oil sex scene. It was the ridiculously cheesy soundtrack. The sub-Springsteen songs play all throughout the movie. Someone named Fred Mollen sings the ridiculously earnest theme song. The supremely silly dad rock songs have titles like “Rockin' in the Moonlight” or “Goin' for the Gold.” It's all pretty hilarious. The score isn't much better. One scene even has country bumpkins banjos playing in the background!

Really, if “Fast Company” wasn't directed by David Cronenberg, there probably wouldn't be anything interesting about it. Searching for the director's trademarks and interest in the otherwise unremarkable material is what makes this fairly dull carsploitation flick more involving. The DVD is worth owning mostly for his fascinating, very scientific commentary, where he shares a number of interesting anecdotes about the production and what drew him to the material. “Fast Company” made back its budget but it's not hard to figure out why Cronenberg would never quite stray outside the horror/thriller genre again. [Grade: C]
Posted by Bonehead XL at 10:40 PM