David Cronenberg's career has been made infamous by a few characteristics. The bodily mutation and mutilations that defined his horror movies made them notorious. Over the years, kinky sex has also cropped up in several of his films. Those that follow Cronenberg's career a little more closely – or at least have seen “Fast Company” – know that the director also really likes cars.  In 1973, J. G. Ballard would write a highly controversial novel called “Crash,” about people sexually aroused by car crashes. Considering his various interests, it's very unsurprising that Cronenberg would want to adapt “Crash” to the screen. Like most of the director's films, it quickly acquired a cult following and remains a topic of debate among movie fanatics.

Movie producer James Ballard is slowly loosely touch with his wife, Catherine. In order to spice up their marriage, the two head out on increasingly deprived sexual adventures. They have affairs and tell each other about them. While leaving work, James' car collides with another vehicle. The other driver is killed but James and the passenger survives. Trapped in the car, his body broken, he catches a glimpse of the other woman's naked body. This awakens new sexual desires in Ballard. Meeting the woman again, Dr. Helen Remington, the two discover a cult of car crash fetishists. Led by a man named Vaughn, they reenact famous car crashes. This leads Ballard and his wife towards further sexual adventures.

“Crash” fits neatly into Cronenberg's filmography. The movie begins with a shot of a mostly naked woman leaning over the hull of an airplane. From the first scene onward, “Crash” is all about the mingling of nude flesh and emotionless metal. Early into the film, Cronenberg has Vaughn say his car crash fetishism is all about the “reshaping of the human body by modern technology.” He later dismisses this statement but it's clear Cronenberg is attracted to the idea. After his crash, Ballard's leg is fitted with an elaborate cage, turning him into a cyborg of sorts. A supporting character wears braces on her legs. By the film's end, all of the characters are covered in scars. Transforming the body by smashing cars together, an even cruder fusion of man and machine, is absolutely something “Crash” is about. Though existing totally without science fiction or fantastical ideas, “Crash” is absolutely one of Cronenberg's body horror films, explicitly concerned with the mutation of the flesh. 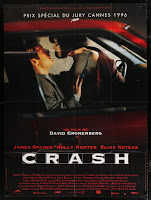 If the main theme throughout Cronenberg's career has been turning the inside out – the body bursting out of itself or the mind become physical – than “Crash” fits right in for that reason too. The car crash paraphilia is one that physically changes the body, another example of Cronenberg making the psychic physical. Vaughn declares that he sees car crashes as a “fertilizing rather than a destructive event.” “Crash” is a film obsessed with non-suburban sex. Threesomes, voyeurism, homosexuality, swinging, and exhibitionism are all on display. The car crash fetish puts all these previous kinks to shame. It's all about chasing an even bigger thrill. Sex is often linked with death, which is the most transformative experience of all. So “Crash” takes the link between sex and death – Eros and Thanatos – to a horrifying literal place, creating sex where death is a side effect and maybe even the intended outcome.

Contained within “Crash” is also a bizarre satire of celebrity culture. Vaughn's car crash cult recreates famous vehicular collisions throughout history. We see him reenact the death of James Dean and the crash of the Little Bastard. He recounts every detail leading up to the crash and everything that followed. He's similarly obsessed with the JFK assassination, which he considers a car crash of sorts, and plans on recreating Jane Mansfield's fatal car crash next. His stunt driver is particularly obsessed with Mansfield, wanting to transform his body to resemble the famously busty starlet. Vaughn's followers also watch car crash video tapes over and over again, like obsessive TV fans study every frame of their favorite show. It all strikes me as an especially perverse and self-destructive version of fandom. Is wanting to know everything about car crashes any different from nerds hording info about their favorite shows? Is wanting to become a famous car crash victim that different from cosplay?

Cronenberg's emotional distance from the material eventually becomes a problem though. The relationship between Ballard and his wife, technically the main conflict of the story, never makes the audience feel anything. From the beginning, there's a disconnect between the two. They are so distant that you never really understand that an emotional separation has occurred. This makes the film's ending, where the two reconnect with each other, pretty much meaningless. Almost everyone in “Crash” acts like that, a little too icy and staccato. It makes it a hard film to connect to and almost seems by design.

For whatever flaws the film might have, the director certainly found the perfect star for the material. In-between this film, “Secretary,” and “sex, lies, and video tape,” James Spader has practically been typecast as the go-to-guy for kinky sexual dramas. He's an actor who has no problem appearing sleazy or unsympathetic. Spader is introduced boning a P.A. on his film set. From there, he grows more deprived, seeking more extreme sexual thrills. Spader is totally on the film's icy wavelength, playing the part like a deviant scientist. He even manages to incorporate an odd sense of humor, during the sequence where the character gets a tattoo.

But Spader doesn't give my favorite performance in the film. Elias Koteas stars as Vaughn. While everyone else is icy and detached, Koteas is passionate. He acts as if he's in a constant state of arousal. He's always nervous, his skin always flushed, as if he's desperately trying to control his passion. Koteas fantastically conveys this state of hyper-arousal. He straddles the line between extreme pervert and religious prophet, as he talks about his fetish in hushed, almost awed tones. In a film world that is somewhat frosty and disengaged, Koteas' fiery performance seems even more alive.

There's also some notable names in the supporting cast. Holly Hunter appears as Dr. Helen Remington. Considering Hunter has always projected a quirky sexiness, she's well suited to “Crash.” Most of the film's genuine eroticism comes from Hunter's unique attractiveness. However, her part is also badly handcuffed by the film's emotional distance. Rosanna Arquette is given an even thinner part as Gabrielle, the girl with the suggestive scars. However, Arquette is given few opportunities to expand her character beyond a sexual object. A large reason while the plot between Ballard and his wife doesn't work is because Deborah Kara Unger is borderline flat as Catherine. It's all very intentional, I imagine, but the characters sometimes seem less like people and more like robots expounding on certain ideas.

Despite the graphic violence and sex, “Crash” continues the trend of Cronenberg's movies looking gorgeous. Matching the polished chrome that obsesses so many of the characters, “Crash” often looks extremely polished. As in “Dead Ringers,” there's a blueish tint to the film, further suggesting the feeling of unfeeling blue steel. There's a twin aesthetic here too. Just as torn flesh and shattered bone goes with twisted metal and crushed chrome, the film sometimes look incredibly groddy and gritty too. Such as when Vaughn stops to snap photos of a car crashes or the aftermath of a love scene in a car wash.

The fusion of the organic and the mechanic is even present in the score. Howard Shore's soundtrack is largely characterized by plucking, discordant notes and piercing guitar notes. These noises, not dissimilar from sounds of screeching breaks or skidding tires, stand alongside more humanistic melodies. Shore also incorporates a sexual rhythm to the music, which builds in intensity like an on-coming orgasm. Just like the movie, the music is deeply unsexy, which a menacing and disturbing air. I would not recommend putting this on your hanky-panky playlist but it's perfect for “Crash.” 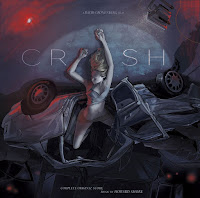 “Crash” would become the most controversial film of Cronenberg's career, which is no small feat. The movie's constant and graphic sex made any rating but the commercially dreaded NC-17 impossible. (An R-rated cut, missing ten whole minutes, does exist.) In the U.K., there was even a call to ban the movie. This was unsuccessful but it put “Crash”  at the center of that old debate about obscenity, art, and what's acceptable in film. This controversy did result in the movie being commercially successful, despite its adults-only rating and off-putting premise. As a film, “Crash's” ideas are absorbing and intriguing. Its characters are not involving and its approach is a little too cold but the film is too strange, too interesting, and too well directed not to be fascinating. [Grade: B]