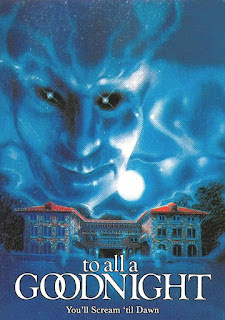 One of the reasons why the slasher genre ruled the eighties horror landscape was due to how easy it was to replicate that formula. Horror's always been a pretty cheap genre but, with the slasher, filmmakers could dispense with expensive haunted house sets or rubber monster suits. All they needed was a decent setting, a cheap mask, some actors willing to get naked, and a few buckets of fake blood. These attributes were especially irresistible to first time filmmakers. After starring in so many low budget horror movies, David Hess – best known as the star of “The Last House on the Left” and several of its Italian knock-offs – decided to make one himself. The result was “To All a Goodnight,” a Christmas-themed slasher that is widely dismissed even by hardcore fans of the genre. Save for a documentary short film, it was Hess' first and last attempt at directing.

Likely taking some cues from “Black Christmas,” “To All a Goodnight” is set in a sorority house during Christmas break. It's against the rules for the girls' boyfriends to stay overnight but the sisters have different ideas. They drug their house mother while the boys fly in – one of them is a pilot – for a night of yuletide partying and nookie. But someone else has different plans. A killer, wearing a red Santa suit, is stalking the sorority house, killing the girls. And that's about all there is to the plot.

Made fairly early into the subgenre's existence, “To All a Goodnight” feels no need to resist slasher cliches. It's almost astonishing how many of the expected beats this movie hits. It begins with a crime in the past, a harmless prank turning deadly in a way not totally dissimilar to “Prom Night's” opening. Young people getting together to bone and drink seemingly draws the attacker out. The police are useless, quickly being offed by the killer. The murderer severs the phone line just when someone's ready to call for help. The girl that ends up surviving, making it to the next morning, is pointedly a virgin. The ending twist, meanwhile, recalls the original “Friday the 13th.”  It's hard to believe that these story troupes were already so well known in 1980. But it certainly feels like Hess and his team were trying to hit every item on a checklist.

As a filmmaker, David Hess makes some questionable decision. He films the opening flashback through a circling white haze, an odd move. More than once, he deploys some odd, halting slow-motion, such as when an axe flies through the air towards someone's head. A few other times, he has the screen fade to a bright red color, a move Hess' former director Wes Craven used more effectively in “The Hills Have Eyes.” Hess was a musician but he didn't compose the film's music. Instead, Rich Tufo provides a score full of shrieking synth and blooping noises. Even the editing is a bit of a mess, as characters frequently seem to switch locations at random. Over all, this is not a very professionally assembled film. 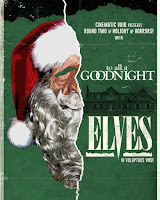 Despite its incompetence, I sort of liked “To All a Goodnight” the first time I watched it. This is mostly because of its cast of characters. Now I'm not saying the acting is good. In fact, it's quite mediocre. The performances range from shrill to flat. None of the characters are especially well written. Most of them fit the expected slasher movie archetypes. You've got the slutty girl, the nerdy guy, the jock. A lot of the characters don't even get that much development. However, the film's treatment of its characters are mildly interesting: Practically all of them appear to be swingers. The characters switch sexual partners throughout, going from one bed to another. One night, a girl seduces the nerdy guy. The next day, he's chasing after the virginal final girl. The woman he just slept with then goes off with another guy. That's not something you see frequently.

So “To All a Goodnight” delivers soundly on the “sex” part of the slasher genre's sex and violence equation. What of the gore and dismemberment? “To All a Goodnight” is one of those slashers largely composed of people wandering around, wasting time, in between the various murders. While evenly spaced throughout the film, the deaths seem few and far between. Not many of them are very memorable. You have your typical throat slashings, stabbings, and blunt force trauma. Only a few moments make an impression. The killer trades out the Santa get-up for a suit of armor in one scene, interrupting a sex scene with a crossbow. Later, a pilot – played by porn star Harry Reems, of all people – and one of the girls meet the business end of a plane propeller. So there's just barely enough slaughter to satisfy.

There's quite a few Christmas-set slasher films. “Black Christmas” and “Christmas Evil” all engage with the Christmas setting to some degree. "Silent Night, Deadly Night" at least utilizes the holiday as a decent gimmick. “To All a Goodnight” barely feels like a Christmas movie. It's set in California, so there's no snow on the ground. There's a tree in the sorority house but it's hardly paid much attention. The killer dresses as Santa Claus but it truly feels like an afterthought. Honestly, if it wasn't for the Santa costume and a few lines of dialogue, you'd probably never know the film even took place in December.

For years, the only copies of “To All a Goodnight” that circulated were from old VHS copies. These tapes were notoriously dark, making a sloppily edited film even more difficult to follow. You can now watch “To All a Goodnight” on a crystal clear Blu-Ray but that only goes so far to improve what a lackluster experience this is. David Hess passed away in 2011. He played a great horror villain in “Last House on the Left” but that clearly didn't translate into being a great horror filmmaker. “To All a Goodnight” is a stock-parts slasher, made on a shoestring and hastily thrown together. It's easy to see why Hess wouldn't direct a feature again. [5/10]