As someone partially raised in the Jewish faith, and considering the large number of Jewish people working in Hollywood, I've always found it odd that there are so few films about Jewish holidays. There are roughly ten thousand Christmas movies. But Hanukkah, the Jewish winter festival? As far as I can tell, there are exactly two movies explicitly about the celebration. Last year, I reviewed “The Hebrew Hammer,” an amusing parody though hardly the film I want representing the entire feast of lights. This year, I decided to cover the other fifty percent of Hanukkah movies. And it was a hard decision, as Adam Sandler's “Eight Crazy Nights” is widely regarded as a deeply terrible film. But, hey, my Jewish side wasn't going to let all eight nights go by covering just goyish movies.

The New Hampshire town of Dukesberry is celebrating the holiday season. Christmas is around the corner while the town's large Jewish population is beginning the eight night festival of Hanukkah. Everybody is celebrating except for Davey Stone. Davey is an asshole, committing crimes and ruining everyone's good time. His latest rampage gets him placed under the care of Whitey, the elderly and eccentric good samaritan around town. Whitey is the couch of the youth basketball team and encourages Davey to mentor a young boy. While Davey is resists these attempts at rehabilitation at first, he soon starts to come around.

Consider the career of Adam Sandler. Though a reliable box office star over the years, the amount of effort Sandler put into his features has decreased steeply with time. “Eight Crazy Nights” came out fifteen years ago and Sandler had already, for the most part, quit trying by then. The animated feature is overwhelmingly crass. The film opens with a long burping joke. There's a fart joke not long afterwards, along with jokes about other bodily functions and parts. An extended sequence is devoted to someone being frozen inside human feces. There are jokes at the expense of the Asian, the overweight, the neuro-divergent, amputees, transgender, virgins, the elderly, the tall and the short. Davey is unendingly obnoxious while Whitey has an incredibly obnoxious voice. More offensive than any of this is the clear loathing “Eight Crazy Nights” displays for the world. This is a hateful film, spewing bile and intolerance on nearly everyone.

The story is hostile and belligerent but “Eight Crazy Nights” is still a testament to Adam Sandler's ego. Davey begins the film as a detestable asshole, heaping spite on everyone in the town but also himself. Despite this, the character still gets a redemptive arc. As in “Big Daddy,” “Bedtime Stories,” and probably a few other films, Sandler's character bonds with a child. This eventually thaws his heart, leading him to a romance with a beautiful - and totally personality-free - woman. For extra mileage, Davey is also given an incredible talent, being naturally gifted as basketball. (Also making the movie similar to “Happy Gilmore,” “The Waterboy,” and “The Longest Yard.”) “Eight Crazy Nights” doesn't skimp on another Sandler trademark: Gratuitous product placement. Practically every business in the town mall is a real one and, at one point, the corporate logos come to life to give our asshole hero a pep talk.

As if building its story around a very annoying set of characters wasn't enough to put off viewers, “Eight Crazy Nights” is also a musical. Yes, not only does Adam Sandler inflict a high-pitch, brain-bleeding voice on us, he also sings. While Sandler's vocal talents are enough to sustain a jokey number like “The Hanukkah Song” – a third version of which plays over the end credits – but it's hardly enough for actual musical numbers. Probably the most ear-splitting number if “Technical Foul,” in which Sandler sings as both Davey and Whitey. The lyrics, for that song and every other, are naturally totally inane. There are references to shitting, farting, bald ladies, and hairy asses and that's just one song. Other numbers include a man in a dress, a phone sex line, and a burning trailer.

I will give “Eight Crazy Nights” this much. The animation is decent. Apparently, some of the same character designers from “The Iron Giant” and “Anastasia” worked on the film. You can't help but notice the similarities. I also remember laughing once, about a joke involving deer wearing wigs. Otherwise, the film is entirely foul, inside and out. It lacks in laughs and heart, being an entirely rotten experience. Then again, this is exactly the kind of bullshit we expect from Sandler. It's really a bummer that this is one of two films the proud Jewish people have to represent their eight-night celebration. [2/10] 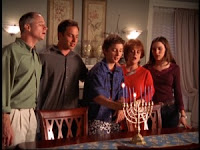 Even Stevens: Heck of a Hanukkah

I watched a lot of the Disney Channel during my late adolescence and pre-teen years. I've already reviewed every episode of “So Weird,” one of the network's better and more obscure shows. Yet I also enjoyed their aggressively wacky, kid-targeting sitcoms. I can try and be snide and say I watched “Lizzie McGuire” and “Even Stevens” because I thought Hilary Duff and Christy Carlson Romano were cute. I mean, I did but I genuinely found these programs to be amusing as a youngster. I'm talking about “Even Stevens” on the first night of Hanukkah because, it turns out, the family at the show's center were of mixed faith. Jewish on the mother's side and Christian on the Dad's side. (Perhaps this was done because the show's stars, Shia LeBeouf and Romano, are themselves part Jewish.) The show even did a Hanukkah episode in its first season.

Anyway, “Heck of a Hanukkah” begins with Louis and Ren, the brother and sister that the show is about, arguing. The hyper Louis is trying to find where his parents hid their Hanukkah presents, while Ren is being her usual overachieving self. Louis finds the gifts and ends up accidentally tossing them out the window. He gets, understandably, grounded and wishes he was never born. At that point, the ghost of Louis' Jewish grandmother appears to him, showing him what his family's life would be like if he was never born. 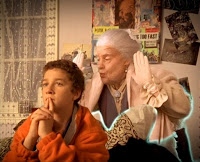 “Even Stevens” was an aggressively wacky show. This is apparent from the opening credit sequence, depicting the battling siblings as stop-motion animated cartoons. So it's not surprising that “Heck of a Hanukkah” bends towards the broad and loud. Louis' antics are overly zany, as his search for his presents involve “Terminator”-style graphics, lots of fast-motion photography, and randomly destroying stuff all around him. The fantasy scenes reduce the already simplistic characters even more. In the alternate reality, Louis' jocky brother is now a simpleton obsessed with a winning a spelling bee. Louis has been replaced with a psychotic, perfectionist brother that eventually attempts to frame the boy for a crime. Louis, meanwhile, dances around with a chicken on his head. It's pretty dire stuff, aimed squarely at the kiddie crowd.

Disappointingly, “Heck of a Hanukkah” only directly addresses the characters' faith a few times. The siblings' mom relates the story of the Maccabees while frying latkes. The episode concludes with the clan lighting the menorah. And the ghostly grandmother has a Russian-Jewish accent. Otherwise, this easily could've been a Christmas episode, especially so considering the story is yet another riff on “It's a Wonderful Life.” And I'm honestly unsure if treating a non-W.A.S.P. background as an everyday, unremarkable thing is better than making a big deal about it. Anyway, that's another artifact from my childhood that absolutely does not hold up. [5/10]