14. The Warlord: Battle for the Galaxy

Joe Dante was never a reliable box office performer. While he occasionally directed a major hit like “Gremlins,” most of his movies gained cult followings but not massive audiences. Probably because of this, Dante would find a lot of work in television in the nineties and beyond. By 1998, his last two films had been made-for-TV movies. Going forward, Dante would lend his talent to episodes of episodic television series like “Picture Windows,” “Night Visions,” “CSI: New York,” the new “MacGuyver” and “Hawaii Five-0.” It's around this time that Dante would direct an unsuccessful pilot for a science fiction series. Intended to launch an on-going TV show called “The Osiris Chronicles,” the pilot would instead be aired as a stand-alone TV movie called “The Warlord: Battle for the Galaxy”

The plot of “The Warlord” is ridiculously convoluted but I'll do my best to summarize it quickly. Following a massive intergalactic war, the humans and aliens spread across the universe are left with few resources. Justin Thorpe is a thief and rogue. Following the disappearance of his little sister, he teams up with General Sorenson, a veteran of the war and a former member of the Galactic Republic. Gathering on his ship, the Osiris, Thorpe incurs the wrath of Warlord Heenoc Xian. The crew goes on the run, gathering up more members, and eventually running into a race of self-mutilating alien perfectionists known as the Engineers.

“The Warlord” would air on UPN in January of 1998. At the same time, UPN was also the television home of the “Star Trek” franchise. “Star Trek: Deep Space Nine” and “Star Trek: Voyager” were both airing at the time this film premiered. So it's not surprising that “The Osiris Chronicles” would emulate “Trek.” In fact, “The Warlord” is among the most blatant attempts to replicate the “Star Trek” formula I've ever seen. It's got a band of heroes, working together despite their disparate personalities, traveling the universe on a specifically branded spaceship. They even come in conflict with an antagonistic alien race that captures people and rip away their personalities. The debt “Battle for the Galaxy” has to nineties “Trek” is evident any time the ship is struck by enemy fire, when the camera jerks around and people fling themselves across the set.

“The Warlord” isn't just one of the most boldface rip-offs of “Star Trek” I've seen. It's also among the worst. The plot is the kind of impenetrable sci-fi gobbledygook that gave the genre a bad name. Characters immediately toss off names of planets, ships, and empires. There are references to a deeper lore, to vague events that happened years before the pilot's story actually happened. Never once is there any attempt to make sure the audience actually understands any of this bullshit. The movie dives right into some deep nerd bullshit and never looks back. How ass-backwards “The Warlord's” approach is can be seen in how its structured. The film is narrated, in flashback, by a character that doesn't actually affect the plot for about a half-hour.

Nowadays, genre television shows have special effects budgets comparable to major motion pictures. Things were much more humble in the nineties. The practical effects for “The Warlord” are totally servicable. The set designs are decent, one of the few aspects of the film that really distinguish itself from “Star Trek” and similar shows. The practical creature effects are also quite good, the Engineers having a decently off-putting look for villainous aliens. The show's other effects, however, are less stellar. Unsurprisingly, CGI made for a TV movie from 1998 is not convincing. The shots of the ships look light-weight, plastic-like, and cartoony. Worst yet, the designs for the ships aren't even cool. The Osiris looks like a goofy, metal goldfish.

If “The Osiris Chronicles” was ever going to work as an ensemble TV show, its cast obviously needs to be memorable and interesting. Sorry to say this isn't true either. John Corbett stars as Thorpe, the pilot's attempt at a Captain Kirk/Han Solo-like rogue-ish hero. Corbett is a decent lead – look up the short-lived “Lucky” for proof of that – but he seems baffled and disinterested in the material here. Rod Taylor, in a part intended for Christopher Lee, attacks his lines with gusto even if he clearly has no idea what any of it means. John Pyper-Ferguson, as the titular Warlord, gives a surprisingly awful performance, sneering all his dialogue through a weirdly put-on accent.

And there's a ton of other characters in this thing. Being a pilot, “The Warlord” sets up dozens of potential plot points. There are betrayals and strained alliances, the heroes teaming up with the Warlord and Thorpe wondering if he can trust Sorenson. There's familial connections that need to be resolved, Sorenson having a daughter and Thorpe pursuing his missing little sister. The Engineers are clearly set up to be reoccurring opponents for the heroes going forward. The only attempt to make this stand alone at all is a little narration at the end, an “And the adventure continues” monologue from the narrator. So many excess storylines are piled on us that it becomes completely impossible for the viewer to care about any of it.

It's fairly obvious that Joe Dante was simply operating as a hired gun on this one. Very little of his style or themes are evident in this convoluted sci-fi story. About the only indication Dante directed this are bit parts from Dick Miller and Belinda Balaski. Once or twice, something happens on screen that makes you wonder if the director had a hand in crafting it. The bizarre and morbid secrets of the Engineers is a big, fleshy bit of practical creature effects that is kind of cool. Thorpe's adolescent sidekick reminds me a little bit of “Explorers” and Dante's other kid flicks. Yet aside from these elements, there's very little of interest here at all. 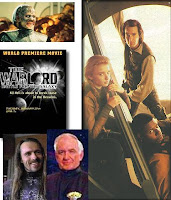 “The Warlord,” obviously, would not launch a series. The rest of “The Osiris Chronicles” would remain untold. Even sci-fi fans that turned hyper-nerdy shit like “Babylon 5” and “Earth: Final Conflict” into relative successes couldn't get into this film's particular brand of nonsense. Subsequently, the pilot has sunk into obscurity. It's easily Joe Dante's most obscure and hard-to-find movie, that buried status being totally justified. Apparently, the TV show “Andromeda” – another sci-fi program too nerdy even for a huge fucking dork like me – bares something of a resemblance to this movie. So maybe “The Warlord,” or “The Osiris Chronicles” or whatever you want to call it, failed not because it sucked but because it starred a character actor instead of a former Hercules. Sure, let's go with that. [Grade: D]
Posted by Bonehead XL at 5:36 PM