In the past, the live action and animated shorts have been packaged separately. If the animated shorts didn't run very long, usually a few runner-ups were included to make the run time worthwhile. This year, whoever is in charge of such things decided the cartoons were too brief and that they should just stick all the shorts together.

If you follow these categories the way I do, you probably already known that the live action shorts are always an especially somber and depressing collection of stories. So we end up going from a trio of animated features that at least temper their sadder moments with surreal comedy to a collection of extremely downbeat live action shorts. That doesn't seem like the best plan to me. This also causes the entire program to run well over two hours, a bit long for something like this.

Hailing from Spain, “Madre” begins with the everyday scene of Marta and her mother entering her apartment. After a few minutes of talking, Marta receives a phone call. It's from her six year old son. The upset boy explains that his father has apparently left him on the beach. He's alone, it's getting dark, and his cellphone battery is close dying. The panicked mother attempts to determine where the boy is and where his dad went. When that proves unhelpful, she attempts to find help from the police or her ex-husband's current girlfriend. That's when the situation takes an even graver turn.

Writer/director Rodrigo Sorogoyen shoots “Madre” in a single, continuous shot. As Marta grows more concerned, and her unseen son becomes more endangered, the camera movement becomes more and more frenzied. This does a good job of replicating the panic she feels, as it becomes increasingly apparent how much danger her little boy is in. The unsettled feeling in the viewer's stomach only grows as Marta does everything she can to get her child, present only as a small voice on the phone, to safety. The acting from Marta Nieto is excellent, the fear and terror she feels being conveyed clearly. The credits, for whatever reason, are done in an especially grating fashion. I don't know what's up with that. “Madre” is a grim nineteen minutes but one that gets exactly the reaction out of the audience that it's aiming for. [7/10]

Next up is the French-Canadian “Fauve.” It follows two adolescent boys, Tyler and Benjamin. The two are messing around in the countryside, attempting to one-up each other with more outrageous stunts. Their game eventually takes them to a completely empty open pit mine. Foolishly crawling down into one of the pits, the two boys take turns getting stuck in the sticky, wet cement-like substance. Eventually, Benjamin starts to sink into it, causing Tyler to hopelessly look for help.

“Fauve” is exactly the kind of artsy-fartsy, miserablist storytelling I've sadly come to expect from the live action shorts. The early scenes of the two kids goofing off together are interesting. Director Jeremy Comte accurately captures the boyish chaos and playing among male friends at that age. However, once “Fauve” arrives at the mine, it gets stupid in an overly serious, somber way. The idea of a wide-open area like that being so completely abandoned strains plausibility. So does the cartoonish way the kids sink into the ground. After things get especially grim, “Fauve” graduates to full-blown pretentious, with wide-screen shots of Tyler wandering the rocky area and an obnoxiously ambiguous ending. I was fully expecting things to go in a surreal direction from there but they never do, making “Fauve” seem even more frustratingly pointless. [5/10]

The French “Marguerite” is another bummer of a short film but at least its story is told with a degree of subtly and pathos. The titular Marguerite is an elderly woman nearing the end of her life, her frail body covered with wounds. While her nurse is bathing her one day, she discovers the other woman is a lesbian. This causes Marguerite to reflect on her own past, on the time when she loved a woman but was unable to ever consummate or even publicly admit her feelings.

There's definitely a certain grace to “Marguerite.” Director Marianne Farley takes some time to establish the characters and their setting. The audience feels how Marguerite's memories and age weigh on her just from her appearance. The quiet way she discovers her nurse's status as a gay woman, and how that plays out, occur in a very sweet manner. “Marguerite” is ultimately a touching tale of long repressed desire and a long-since-atrophied need to be recognized and seen. The acting, from Beatrice Picard especially, is very good. And it's nice to see some representation of an elderly LGBT person. [7/10]

If four of the five animated shorts are linked by themes of parenthood, four of the five live action shorts revolve around young boys being involved with violence. An Irish film, “Detainment” is directly based off police transcript from a shocking crime committed in 1993. Jon Venables and Robert Thompson, two eight year old boys, are playing hooky at the mall and shoplifting. This is when they abduct two year old James Bulger. The older boys dragged the toddler to a railway before beating, torturing, and killing him. “Detainment” details the crime in flashback, as the two young perpetrators are interrogated by the police, assembling a timeline of this heinous event.

While “Green Book” and “Bohemian Rhapsody” have gotten most of the press, a smaller Oscar controversy has swirled around “Detainment.” The mother of James Bulger, the murdered boy, apparently was not consulted during the making of the film at all. She has protested its release and petitioned for its nomination to be removed. So the question circling “Detainment” is whether its treatment of this incredibly disturbing true life case was worth pissing off the victim's mother. I've got to lean towards “no” on that one.

The film portrays Robert Thompson as a heartless sociopath, who manipulated the other boy into helping commit the crime and then tried to blame him for everything. Jon Venables, meanwhile, is depicted as being dragged into this horrible crime largely against his will. Considering Venables has been linked to other crimes since then, including the possession of child pornography, this is in questionable taste. The same could be said of the entire film. I'm not sure what the filmmaker hoped to accomplish by directly using the real police transcripts. The film seems satisfied to just portray this events, not to make any point. His visual direction is largely heavy-handed, the flashbacks being filmed in a blurry, flashy manner. While decently acted, the film just made me feel disgusted without any wider point. [5/10] 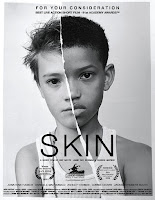 This year's connecting fiber of kids being involved in violence comes full circle with “Skin,” a film with maybe the most offensive premise I've seen in quite a while. The short revolves around a family of white supremacist. Young boy Troy doesn't seem to understand the hateful rhetoric spouted by his tattooed father and his skinhead friends. While at a grocery store one night, a black man smiles at the boy. This prompts his father, Jeffrey, and a group of racists to brutally beat the man in the parking lot. A few nights later, Jeffrey is abducted by a group of black gangsters who devise a painfully ironic and utterly cartoonish punishment for him.

Congratulations to “Skin” for being maybe the worst Oscar-nominated film of all time. If you thought “Detainment” was tasteless and “Green Book's” handling of racism was tacky, get a load of this shit. Up until the beating sequence, the early scenes of “Skin” captures a white trash existence in a fair way. I thought this was going to be a story about a young boy realizing racism is wrong. Instead, following the brutal-for-brutality's sake act of violence, “Skin” spins towards a ridiculously offensive plot twist.

I think the film's moral is suppose to be “violence only begets violence” but making a white supremacist a victim of a group of scary black men, directed in such a way that they look practically demonic, sends pretty much the worst possible message you could in 2019. Wrap it up with a pointlessly nihilistic, faux-shocking ending and you have a film poorly conceived on a level I haven't seen in quite a while. Not that I needed any more proof of how out-of-touch and clueless the Academy is but “Skin” getting nominated at all shows an astonishingly poor sense of judgment on their behalf. [3/10]