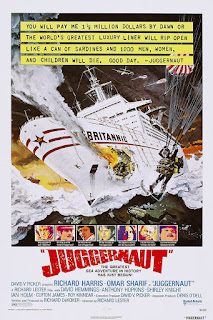 “The Poseidon Adventure” was a huge success all over the world. It wouldn't surprise me if a British producer saw the film and openly wondered if he could do better than that. Because “Juggernaut” is another nautical themed thriller, set aboard an imperiled cruise liner, with some big explosions and action-packed set pieces. Richard Lester directed the film and it was released in-between his two “Three Musketeers” pictures. It seems this was an important stop on Lester's journey from quirky comedy director to blockbuster filmmaker. While the film touches upon many hallmarks of the disaster genre, “Juggernaut” focuses more on chilly, crime movie style thrills than big spectacle.

The S.S. Britanniac pulls out of port. The passengers aboard are hoping to have an exciting adventure. However, the choppy weather isn't the thing that's really going to interrupt their vacation. Later in the day, the owner of the ship receives a phone call from a man calling himself “Juggernaut.” The caller say he's planted several high-powered explosions throughout the ship. If his ransom isn't paid by dawn the next day, he will blow up the cruise liner and kill everyone aboard. To prove he's serious, he detonates a smaller bomb. The government deploys Lt. Commander Anthony Fallon, an eccentric explosives expert, to lead a bomb-disposal unit. But will they deactivate the bombs in time? 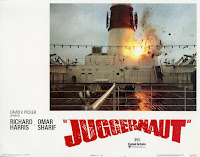 From its opening minutes, it's abundantly clear that “Juggernaut” is different from the American disaster movies that likely inspired it. The film begins with documentary-style peaks at the ship and its passengers as it pulls out to sea. This sense of distance is maintained throughout much of the film, giving “Juggernaut” a more serious and down-to-earth feeling than many similar films. The grounded direction is paired with a very deliberate pacing, verging on slow. It takes a while to get into “Juggernaut” but this approach works fairly well, creating a more tense and unique atmosphere.

The movie also has a very odd sense of humor, so dry that I'm not even sure how intentional it is. The film focuses equally on the bomb-disposal crew and the passengers on the ship. As the explosive experts work on defusing Juggernaut's bombs, the people aboard tensely wonder if they're going to survive. So they throw a costume party and sing songs, drinking and talking among themselves. You get a sense of how uneasy the passengers are while also understanding how it's kind of boring, waiting around to find out if you're going to live or die.

These scenes are interesting but “Juggernaut” ultimately works better when focusing on thrills. You can largely thank the cast for this. Richard Harris plays up Fallon's eccentricity, making a character who seems slightly unhinged. Yet it also becomes apparent that he's the best man for the job, in the tense finale where he's defusing Juggernaut's final bomb. A young Anthony Hopkins appears as the superintendent leading the investigation. Hopkins is controlled and quiet. Ian Holm, sporting with a full head of hair, contrasts with Hopkins by being fiery and upset. David Hemmings appears as Harris' sidekick, squirrely and sweaty. Omar Sharif is somewhat disappointing as the boat's captain, a little too subdued.

“Juggernaut” is an interesting take on the disaster movie genre. It's slower and more low-key than these films usually are. In fact, it feels more like a crime movie at times. It takes some patience, as the exciting scenes stand alongside much slower moments. Most of the performances are solid and it leads up to an impressively tense conclusion. The film flopped in 1974, which isn't too surprising. This isn't a movie that exactly gives the viewer what they want. However, I think there are some interesting elements to it, at least enough to give it one watch. [6/10]